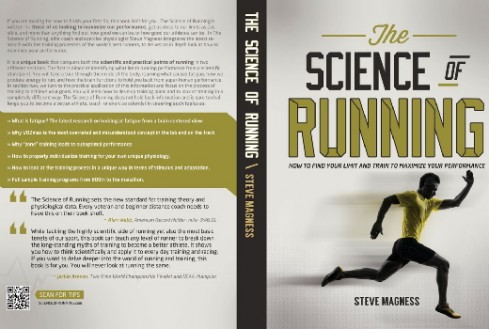 Title: The Science of Running: How to find your limit and train to maximize your personal performance

Steve Magness recently wrote the book, The Science of Running: How to find your limit and train to maximize your personal performance. If the title sounds familiar Magness also writes all the content for the weblog of the same name, The Science of Running, which as he wrote on the header of the site, “is an in-depth look at training, coaching, sport science, and anything else that relates to enhancing endurance performance.” The book is a reflection of the website, but is organised in a familiar and easy-to-index format; being a book. 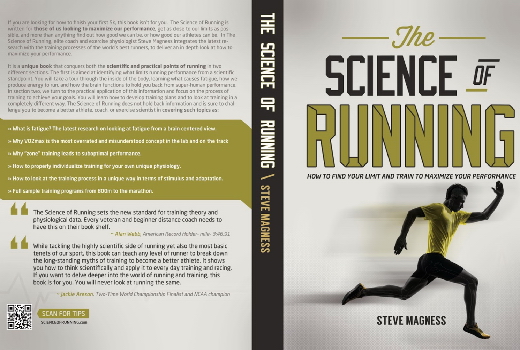 Magness’s credibility is supported by an NCAA division one college career, where he represented Rice University and the University of Houston. Currently he coaches professional runners Jackie Areson who has run as fast as 4:12 in the 1500m and owns a 5K personal best time of 15:14. He also coaches Sara Hall and Tommy Schmitz. Schmitz owns an 800m personal best time of 1:49 and a 1500m best of 3:39.

Magness earned his MSc in Exercise Science from George Mason University, which together with the above, indicates enough qualification to be considered very knowledgeable in matters related to the science of running. Additionally, Magness worked with the Nike Oregon Project alongside the legendary coach Alberto Salazar as his scientific advisor. I listened to Salazar speak at a conference in Vancouver two years ago. Magness supported Salazar with scientific information that explained why certain methods that Salazar used, worked. So the book is written from the perspective of someone in the know. It is intended for nearly all levels of runners and only the newest to the sport may find the going tough, but only in the first half.

The book provides two completely differing sections that support each other; the first half is a scientific explanation of everything to do with running middle and long-distances while the second half covers the practical application.

Magness dives fairly deep into various subject matter, but pulls back on the technical rhetoric just in time; good for those who are at least semi-literate in running jargon to enjoy and learn. In chapter one, he discusses how running happens by dividing the discussion into key parts, Motor Programming, Muscle Contraction, Energetics, Muscle Fibre Types, Recruitment and Passive Mechanics. This is an important part of the book, as many coaches and athletes often bypass the neuro-muscular aspect of training the body and fast-forward directly to the cardio-vascular realm, sticking to simply stimulating aerobic and anaerobic  strata. An initial indication that this is a well-rounded and relatively in-depth book on running, he starts the introduction off by writing, “This is not your typical watered-down mass-market training book that relies on cookie-cutter programs.”

Magness cuts to the chase, for example directly after the introduction he lists off his, Rules of Everything. He neatly puts the reader into the understanding that this is a man with confidence who invokes such rules as, 2. Research is only as good as its measurement and 5. We underestimate the complexity of the human body (and almost everything else); this is a refreshing view from a science-based coach.

Magness spends a fair length of time on the brain, the “master controller” as he refers to it. According to him it only makes sense to start with the brain and to work our way down. There is no doubt that the brain is one of the least explored pieces in the puzzle to better athletic training and performance. Next to playing with genetics and DNA, it is commonly referred to as the next frontier in athletic training. Perhaps it won’t be the powers of USADA and WADA that defeat illegal performance enhancing drug use; it is possible that drugs may just become archaic, redundant and clunky, as we learn to adjust the central governor and the signals from the brain that fights logic. It is no wonder why coaches leave the psychology of their athletes to psychologists; it’s a complex and not so tactile element. Magness dives in to bring us a better understanding of how to improve performance and learn to deal with the gravitational tug-of-war of homeostasis.

Magness also covers familiar subjects such as oxygen utilization, lactic acid and other by-products. He discusses running economy at length and the theories of training adaptation, however, points out faults in theories that have governed distance training for decades. He really tears apart common knowledge about V02max training. In fact he starts the chapter off with stating that Midgley and McNaughton’s review of maximal oxygen uptake has been suggested to be the single most important physiological capacity in determining endurance running performance, by simply stating, “it’s not,” Adhering to his fifth Rule of Everything.

Part two, “How to Train” defines the philosophy of training, defines workouts, and manipulation of training. He asked the question: What are we trying to accomplish? and explains how to bring it all together – perhaps in a summary in chapter 19 of 21: Bringing it all together, periodisation. Magness suggests that coaches assume that the person follows a normal route of adaptation, however, doesn’t define what is normal and suggests we assume that the recovery is correct and long term and adaptation (just happens to) take place; these are general, perhaps bold statements, but likely true. Within the general principles of good and generally understood training practices, we make these assumptions; however, as we move the athletes to a higher level there is less room for error.

Knowing adaption according to Magness has three basic elements, knowing the blueprint that the specific event dictates skill, power, speed, endurance and tactics, for example. Number two is about how the athletes affect the generalised model; we are all experiments of one.  He states that instead of having a generalised program and forcing the athlete into it – perhaps an overarching plan, he says, “Turn the idea on its head.” Know the above two elements, the demands of the event and how the individual affects those demands and then build your training model from there.

Magness then takes the reader into much explored territory, but not the mundane. He discusses training as we know it.

Much of his training philosophy appears to be gleaned from the foundation of roughly 160 athletes, coaches and scientists from around the world including Noakes, Hudson, Billat, Leiberman, Costill, Lydiard, Canova, Coe, Daniels, Peltonen, Coyle and Tucker to name just a few. The basic training principles are commonly understood and he doesn’t stray too far from the generally accepted path to success vis-a- vis periodisation: build base first, peak last and in between progress logically forward, the devil is in the details. Magness appears to employ a classic build with multi-pace training incorporated, but to be clear, this is not to be confused with multi-pace so much in the cardio-vascular realm of training, but more the stimulus of the nervous system and the muscular system, while the aerobic running period is maintained as primarily aerobic and the anaerobic period focuses on most aspects of speed.

The book is an easy read for the runner who is keen to advance their training forward, however, as earlier stated, may be work for a newer runner. As a reference book, much like the website, any coach can benefit from the Science of Running. Magness’s knowledge and perspective are of value. And his underlying attitude that is pervasive throughout the book is outlined in his list of his Rules of Everything; be sure to read that twice. They act as a guide for all that follows. The book is a pragmatist’s effort to impart a broad range of scientific and practical training lore for the practice of better training principles. I highly recommend it.

Gabriela DeBues-Stafford out of World Championships with injury 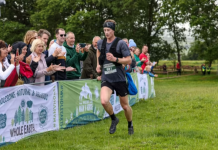 What’s in a name? Ricky Lightfoot wins Man versus Horse race, as first human to win in 15 years 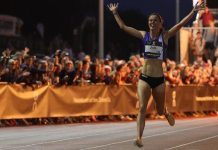 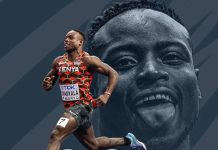