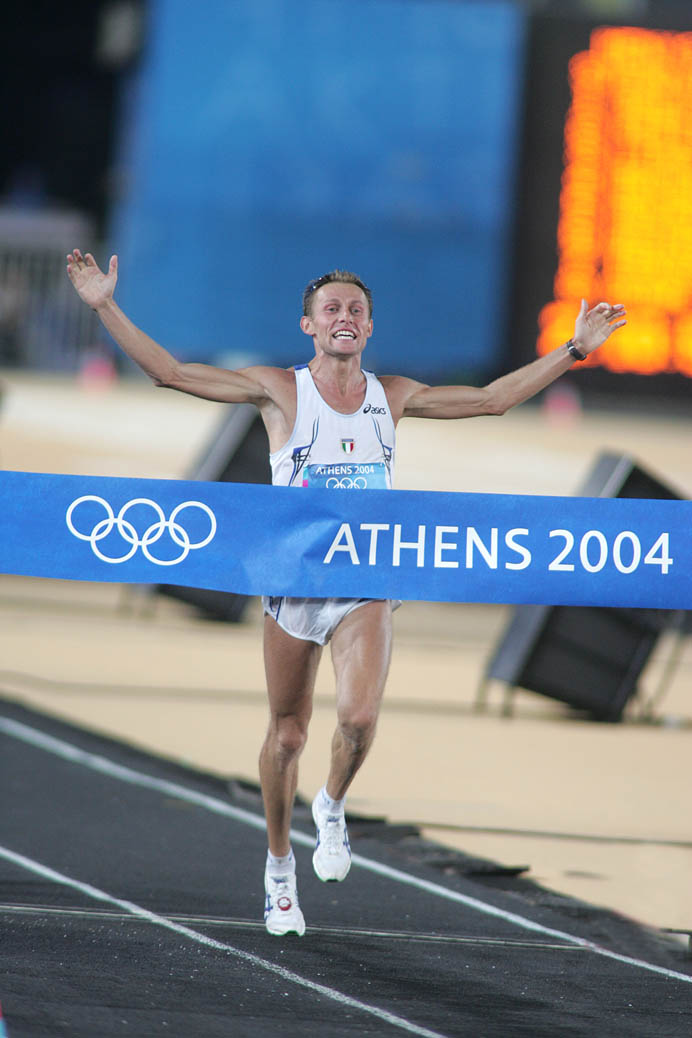 Italian, Stefano Baldini, won the gold medal at the 2004 Athens Olympic Games marathon. He finished the race in very warm conditions in the time of 2:10:55. Finishing second was American Meb Keflezighi in 2:11:29 and crossing the line in third position was Brazilian Vanderlei de Lima clocking a 2:12:11.

Baldini was coached by the legendary, Luciano Gigliotti.

He won at least four other marathons including the 1998 and 2006 European Championships. He also won in Madrid and Rome. Baldini finished in a top-three position 11 times and owns a personal best of 2:07:22 accomplished during the 2006 London Marathon (before super shoes) where he finished fifth. He owns a half-marathon best of 60:50 from the 2000 Malmo Marathon in Sweden. The now 49-year-old finished London in second place twice and is a two-time bronze medallist from the World Athletics Championships marathon.

Born in Castelnovo Sotto, in the province of Reggio Emilia, in 1971, he was farm-raised and attirubtes the healthy lifestyle that influenced his athletics career. “The origins and the family were the key to growing up in a healthy environment that influenced me indelibly. In fact we are a large family, I am the eighth of eleven children (6 boys and 5 girls!),” he has written on his coaching website.

Christopher Kelsall: Do you still get out and run much these days?

Stefano Baldini: I run 40-50km in a week, three or four runs just for fun, alone or with my athletes. As for competitions? Only for charity reasons.

CK: At least four times you ran 2:07 at the London Marathon including your best of 2:07:22 which was the former Italian record. What was it about London that brought out your best?

SB: You know that athletes fall in love with some special races, and London was of course my favourite. They adopted me as a home athlete and I ran there nine times in 11 years. It was an honour.

CK: New York and London were the only two marathons that you ran repeatedly. We know London is fast, but what was it about NY that brought you back?

SB: In my best years I run both, losing regularly by fewer than 100 seconds in New York. For an Italian, the Big Apple is “The Marathon”, full of tradition (four victories in the men’s race) and with more than 30,000 runners at the start every year.

CK: In regards to the 2004 Athens Olympic marathon gold medal performance. Your training looks impeccable, but would you say that you were heat acclimatized and that played an important role?

SB: My best quality was to close the gap with Africans in hot, humid, and medal conditions. Being born and raised in a place like Po Valley probably helped my resistance in extreme conditions. It is a different race, in the summertime, with difficult technical and tactical aspects. The experienced athletes are favourite in this kind of condition, and in 2004, I was 33 years old with 16 top marathons in my background.

CK: The half-marathon distance really ramped up in popularity in the latter stages of your career. Your 60:50 best is a fast time, but do you think that if you were competing as an elite athlete today you would have cracked the 60-minute barrier?

SB: With a 7:43 personal best in the 3000m distance and 27:43 in the 10,000m, probably yes. I was also World Half Marathon Champion. But I ran the half always working towards the double distance, which is a bit different from specializing yourself only for the half.

CK: Former world record holder, Tegla Loroupe, has come out saying that she feels super shoes are the same as doping. She had strong words to say about their use. What are your thoughts on super shoes?

SB: I am not against technologies if there are rules that apply to everybody and without side effects for bones, tendons, and muscles. We improved in tracks, apparels, pacemakers, flat courses, is the future. Don’t forget that a time is beatable, medals remain forever.

SB: The test before Athens 2004 talked about a potential 2:05 with my loved Tarther Japan Special shoes, so I think yes.

CK: In marathon preparation how important is anaerobic threshold training, how much volume (of their total) should one do?

SB: There are different phases in the runner’s career. I was a track runner and in the first marathon period we worked a lot on the aerobic system to transform my engine. After that, trying to be competitive for medals, we returned to train a lot on all the thresholds and be able to run fast during the final 5km or really big changes of pacing in the crucial moments of the race.

CK: Did you get enjoyment out of the long run or was it just a necessary part of training?

SB: Coming from the track at the beginning it was difficult, but to be honest, I can say that start a long run with other athletes is really exciting.

CK: I know that you used to go to St. Mortiz to train at altitude. I was in Italy a couple of years ago and ran in the Euganean Hills area. There seemed to be a tremendous amount of cyclists and some runners of all ages going up and down the hills. Did you get to train in that area?

SB: The Euganean Hills is a special place for cyclists because is fun with a lot of easy up and down, in Italian, we say “mangia e bevi”. I never run there, we spend our altitude periods in the USA, Namibia, and our Alps, of course, St.Moritz or Livigno or Sestriere as well.

CK: Any thoughts yet on who may surprise fans during the distance events at the Tokyo Olympics?

SB: Moving marathons from Tokyo to Sapporo means few surprises, and for medals, it will be the historical match between Kenya and Ethiopia.

CK: At the Siena Ampugnano Airport on April 11, Stefano La Rosa missed the Olympic standard by about 12 seconds and Valeria Straneo just over a minute. Is there time remaining in the season for Italians to make the standard?

SB: There is time until the end of May, but with Valeria (I am her coach) we decide to prepare for shorter distances and support our team from home.

CK: How does it look for Italian distance training these days? Is there a good culture of distance running coming back?

SB: Yes, in the men in particular. National records from 3000 to the marathon have been beaten in the years 2019, 2020, and 2021. We have a lot of middle distance and future marathon runners coming up. The problem is to become a professional runner, you must have the time, the budget, and the services. Is the same all over the world though.