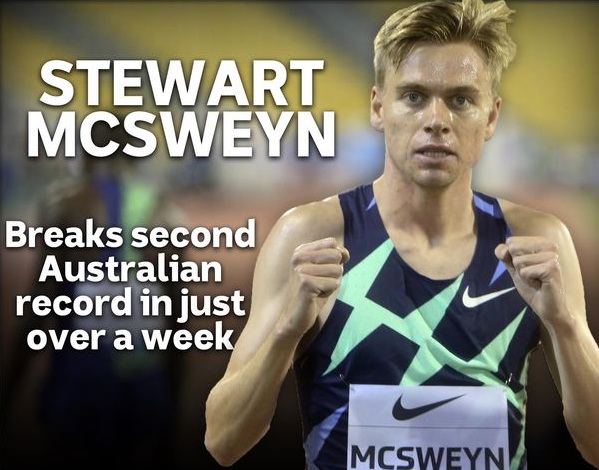 Australian distance runner Stewart McSweyn is enjoying his best season to date, having taken down national records in the 1500m and 3,000m distances during September.

The native of King Island, a small island off of Tasmania, went to post-secondary school at the Deakin University in Melbourne and since then has improved his middle-distance times steadily each year. He is now coached by the legendary Nic Bideau.

Christopher Kelsall: At what age did you start running?

Stewart McSweyn: I started my first training and racing when I was 12-years-old. However, I probably didn’t start training consistently until around 14/15.

SM: I kind of played a lot of different sports until I was about 17 then began to focus more predominantly on running. Most of my time was spent playing Australian Rules Football, tennis, cricket, and golf.

CK: Your nickname is Stewy. That’s not a stretch from Stewart, but was there a Family Guy inspiration there? Can you do any of the voices?

SM: Hahaha no Family Guy inspiration but he is a good character on the show. I just like Stewy as it’s nice and simple.

CK: Congratulations on getting the Australian 1500m record at 3:30.51. You finished with quite a gap ahead of the field. Do you think that if you were challenged more you would have broken that 3:30 benchmark?

SM: I think having more people around hopefully might have allowed me to run a little faster. I think there is definitely room to improve if I focussed more on running a quick time rather the main aim in Doha was to try and win the race.

SM: It definitely has increased over the years since 2017, especially in regards to the intensity. I am able to train out consistently in a training block. However, overall my gradual improvements have been likely a result of being able to put together consistent years of running and training.

CK: There have been many high-level performances and improvements this summer in athletics. Considering the virtual races, empty stadiums, late-season, do you think that with less pressure, some people just focus better at running fast than worrying about tactics?

SM: Yeah, it possibly could be a result of reduced pressure this year with no major championships. However, I think it also has something to do with the fact that athletes were ready to peak this time of the year for the Olympics. So once the Olympics were postponed, I think they tried to convert that fitness to fast racing.

CK: Lately, certain countries have been producing at a higher standard notably Scotland, Norway, Australia, and Canada, why do you think that is?

CK: You have run the 5,000m in the low 13s several times. Like breaking the 3:30 benchmark, getting into the 12s looks possible. Will you go after that benchmark?

SM: Trying to break the magical 13-minute barrier in the 5,000m is definitely on my radar, but it is definitely not an easy barrier to break. If everything falls into place, hopefully, I will have a 5k race before the end of the year to try and break the barrier.

CK: Have you now dropped the steeplechase from your events?

SM: Definitely! The steeplechase was an awesome development event for me and I was able to make my first senior world championships team in the steeplechase.  However, I’m not even sure if I could jump over a barrier anymore if I tried.

CK: How would you describe Nic Bideau’s coaching style?

However, once you start developing he is really quick to back you and let you start deciding on racing and some training structures, which I like.

CK: What sort of weekly volume do you get up to during the non-racing season?

SM: Anywhere between 150km – 165km a week in base training. I don’t often wear a GPS watch, so not often I actually tally my weekly mileage.

CK: What workout or type of run is your favourite?

SM: I like long track workouts, which we generally do on Tuesdays. I like the fact that you normally work both systems during the sessions, aerobic and anaerobic. These are the sessions that really test you and are good indicators of how your fitness levels are tracking along.

CK: Nic has coached a very long list of high-level athletes including Cathy Freeman. The 20 year anniversary of her gold at the Sydney Olympics was a long time ago for you, being just 25. Do you recall anything about that event?

SM: I remember watching it on TV at the time, but the more involvement you have in athletics the more you realise how incredible her performance was!

CK: Considering there is a possibility that 2021 could be like 2020 and the Tokyo Olympics may not happen or if they do, may not look like a typical Olympic Games, what are your goals for the remainder of 2020 and 2021?

SM: Hopefully we do get to have the Olympics next year. I think even if the games don’t go ahead, I think you still have to prepare the same as if they are. The finish to the 2020 season and start of 2021 will have the main goal of being ready to perform at the Olympics.