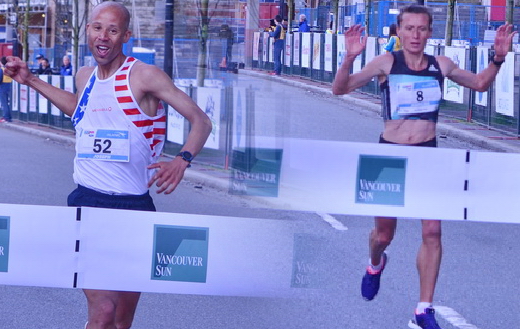 The 33rd annual Vancouver Sun Run took place on the streets of downtown. Current and former Olympians and approximately 40,000 runners, wheelchair racers, and walkers wishing to unleash their inner Olympian took to Georgia Street’s big downhill start at 9:00 am.

The race was won by Colorado Springs, COL athlete Joseph Gray in the time of 29:38. Gray, an 11-time United States Track and Field (USATF) champion in mountain and road racing cleared a field that included local favourite Geoff Martinson of Vancouver – 2011 IAAF World Track and Field Championships 1500m competitor and a collection of Canadian and Kenyan athletes.

The 33-year-old said, “It was at about 3K where the big pack split apart a little, then again at 5K with the hill up to the Burrard Bridge. Geoff put out a good effort today. I am happy with the way I raced tactically-speaking. We did have a headwind for the final few K though.”

Daniel Kipkoech finished in third position. He calls Lethbridge, Alberta home, however, is a transplanted Kenyan, who is familiar with the streets of Vancouver and Victoria, BC – he enjoys racing in Western Canada. Tristan Woodfine of Guelph and Vancouver’s Kevin Coffey followed in next, while 38-year-old Kip Kangogo proved he can still go-go.

Looking down at his 120-pound frame, he sheepishly told Athletics Illustrated on Saturday, “Tomorrow, we see if these legs can still run at 38-years-of-age.” And that they did, crossing the finish line in the time of 30:27. Not bad for a near-master (40-plus) running partially into a headwind.

Kevin Tree and Paul Kimugul followed in next, while Caleb de Jong who attends Trinity Western University raised a few eyebrows by defeating Kenyan Willy Kimosop, Vancouver’s Theo Hunt and Calgary’s Stefan Daniel all of whom finished under 31:00.

TWU Spartans Coach Mark Bomba looked over from a few tables away in the VIP section at BC Place Stadium, post-race and said, “I warned you about De Jong, didn’t I?” He did. Coach Bomba’s magic touch has worked on several athletes including Fiona Benson, who, shortly after graduating experienced massive performance improvements, so-much-so that she ran fast enough to qualify for the Rio Olympics and Beijing World Championships in both the 1500m and 800m distances, the latter of which isn’t her specialty.

While 12 men ran under 31-minutes, Colin Fewer of Paradise, NFLD and Keenan Viney of Calgary stopped the clock at exactly 31:00.

Twenty-nine runners finished under 32-minutes. The final to do so was University of Victoria Vike Josh Kozelj, who crossed at 31:59. “I am pretty happy with the way the race went,” said the first-year student, who is looking like a big talent for the island university.

Forty seconds later (women had a 10-minute head start, so actually finished earlier) Karolina Jarzynska-Nadolska won the women’s race in the time of 32:39. She is hot off her half-marathon performance on April 1 in Poland, where she finished in the time of 69:54 – a personal best and national record.

“I am happy with today’s performance. I am feeling fit after taking some time off for training,” said the Colorado resident. She lives near Colorado Springs. “I like it there. It is a small town and it is quiet, I can get in my training and it is good for my family.”

Wodak is the Canadian record holder at 31:41.59 from the 2015 Payton Jordan Invitational. She was in the race Sunday, but returned to reacquaint herself with race pain, as she put it. Wodak continues to recover from foot surgery.

The three-time Sun Run winner was the fifth woman, finishing in the time of 34:08. Ahead of her were fellow Vancouverite Rachel Cliff, Cold Lake, Alberta’s Emily Setlack and Moscow, Idaho Kinsey Gomez.

Gomez, who finished in 33:20 is a dual citizen, she is both American and Canadian and runs for the University of Idaho Vandals. She is credited as the first Canadian, while Cliff finished as second Canadian and third overall in 33:35 and Setlack crossed the line next in 33:44.

Setlack saw more people Sunday than her and husband Matt Setlack (31:40) see in an entire year in the sparsely-populated Alberta military base town. The two runner’s well-documented training is done on Cold Lake and along local highways 55 and 28, which are typically snow-covered all winter.

Asked if they get funny looks back home Emily responded, “Well the locals know who we are now. They have gotten used to seeing us out training.”

Matt runs to and from work each day, something he has to prepare well for considering the cold winters. “It’s interesting coming to Vancouver during winter because here I am wearing a short-sleeve shirt and shorts and there are locals in parkas and winter jackets.” He Laughed.

They may get a military transfer to Comox Valley, which is a favourite Vancouver Island spot for the couple. If they miss the snow, they will just need to drive 20-minutes up the popular Mt. Washington ski resort to see 15 feet of the white stuff.

Lindsay Carson transferred from Whitehorse, Yukon and now lives in Vancouver, in the community of Burnaby. “Yes,” she said with a smile, “I can say that I am officially living in Burnaby now. I have a great training group and a coach (Bomba) and it is really great to go to a workout and have the session planned for me. I was self-coached up in Whitehorse.”

Carson finished just ahead of two-time Olympian Hilary Stellingwerff, who has transitioned to the roads – it’s still new to her. They finished in 35:04 and 35:13 respectively. Between them was Robin Mildren of Vancouver who is credited with 35:11, while right behind Carson were Victoria Coates of Hamilton, Lisa Brooking and Sabrina Wilkie, both of Vancouver. Lyndsay Tessier of Toronto finalized that group of women who finished in a pack within five second of each other.

Local favourite master, Catherine Watkins won the women’s over-40 category, handily. She crossed the line in the time of 35:43. Thinking that she may have finished over 36-minutes, she looked at the time and said, “oh good, that isn’t so bad after all.” On a different day, later in the season, the talented athlete would have finished under 35. “It’s an early season opener and it was a bit windy, so I am okay with that.”

The first men’s master finisher was Jeremy Deere of Calgary. He won in a solid time of 31:46.

International-level racewalkers who took in the Sun Run got an early start and therefore an opportunity to stand out, as their popularity on the Canadian stage has risen with their global success at world championships and the Olympics. Benjamin Thorne won the racewalk division finishing in the time of 39:45. Not far back was 50K racewalk specialist Evan Dunfee in 40:15; he finished fourth in Rio.

“It was a good event to get that kind of stimulus for me,” shared Dunfee. “Next up is a race in Lima, Peru, providing that the flooding that they have had clears up. But we are booked and planning to go, then, of course, the world championships in London.”

The Sun Run is so big, that after Dunfee and company finished their warm-down, showered and brunched, people were still finishing. The sun made short, filtered appearances and held off the rain throughout. The Sun Run; it’s an appropriate name for a race that was started by Doug and Diane Clement 33-years before.

He also sold the race for $1 CDN to the Vancouver Sun and under their ownership, it continues to grow each year despite the trend of large scale races shrinking globally.

Full results are available at http://www.vancouversun.com/sunrun/index.html.

Post-race interviews and images will be available soon.