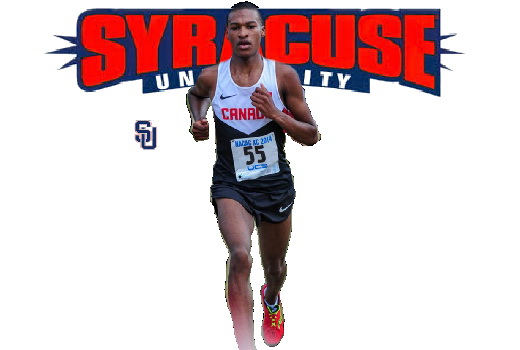 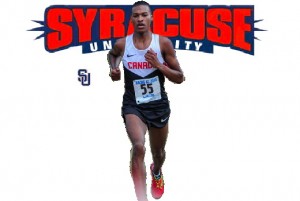 Thomas Jefferson likely rolled over in his grave this past weekend, while the State of Virginia’s motto fell flat on the ears of the University of Virginia and Virginia Tech athletes during the Atlantic Coast Conference Indoor Championships: “Thus always to tyrants”, clearly did not deter Syracuse University Orange, Justyn Knight from being one himself.

Knight won the 5,000-metre event at the ACC Championships for the Orange. He finished in the time of 14:01.07, but it wasn’t the time that impressed, it was his final 200-metre lap that turned heads, as he unleashed the tyranny with a 25.57 final lap.

Knight told Athletics Illustrated, “The 5000m race was fairly tactical. There’s a time and place for everything, and at championships the main focus is to win rather than run fast times. Coming off running a split of 3:56 in the distance medley relay (1600m), I knew that my legs were warmed up to run fast, however, I wanted to wait and see how the race played out,” said the Vaugn, Ontario native . “Because I was running three events Coach Fox and I decided to run more conservative this weekend. Throughout the race I just hung out at the back and gradually moved up. With 200m to go I decided to open up my stride and with 100m to go I picked up the pace again.”

He defeated Thomas Curtin of Virginia Tech by just .08 of a second, but that’s all he needed. Teammate Colin Bennie finished third in the time of 14:02.88.

Knight, for his third race competed in the 3,000m on Saturday, with the same plan in place, achieving the same desired effect – a win. He crossed the line first again in the time of 8:02.68 this time two University of Virginia athletes were the victims to Knight’s tyranny, finishing in second and third place were Henry Wynne and Adam Visokay in the time of 8:03.34 and 8:04.13, respectively.

“I stayed in the middle of the pack so I didn’t have to overexert myself. Then I gradually moved up. With 800 or 600 to go one of the Virginia guys made their move to the front. I just stayed calm and gradually caught up to him,” said Knight. “Coach Fox and I were really happy with that race as well. I believed that I proved I not only have the strength and speed to potentially win big races, but also that I can adjust to tactical championship racing.”

“In the end I was pretty satisfied with how my weekend went. I feel like, even though I didn’t run fast times, I got faster and became a more mature athlete. Being able to be a part of the first track team in Syracuse history to win the ACC team title is something special. And I’m very thankful to be a part of that.”

For the Canadian, he may have adopted New York State’s motto, Excelsior or “Ever upward”.

For the NCAA national championships, which will be taking place March 11 and 12 in Birmingham, Alabama, Knight will be competing in the 3,000m event, he is seeded third.