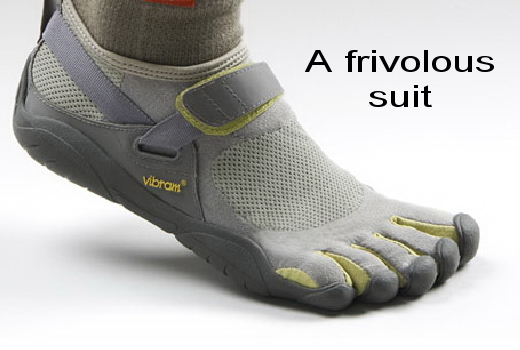 Vibram USA Inc., the company behind the Vibram FiveVinger shoes recently settled a $3.75 million dollar class action lawsuit against them so to avoid the high costs of continuing the legal battle. They were sued by plaintiff Valerie Bezdek (a 4:43 marathon runner) for apparently making false claims that its running shoes provide health benefits that cannot be supported. However Vibram continue to stand behind their product and their lawyer stated, “Vibram expressly denied and continues to deny any wrongdoing alleged in the Actions, and neither admits nor concedes any actual or potential fault, wrongdoing or liability.”

From the civil action document:

The complaint, for example, references a website presenting research funded in part by Vibram that states: “While there are anecdotal reports of barefoot runners being injured less, there is very little scientific evidence to support this hypothesis at this time.”

There is plenty of historic (albeit not necessarily “scientifically controlled”) evidence proving that barefoot running is beneficial to the strength of the foot and lower leg. Where it is not beneficial to the foot is when people attempt to run full-time on asphalt in a pair of FiveFingers or barefoot after wearing traditional footwear all of their lives. There is a process of adaptation that must be undertaken. Adaptation varies from person to person and can sometimes take years to fully complete.

Science and law may need a history lesson, as humans have been running barefoot since the dawn of time – running has been the human defence mechanism and a primary hunting and transportation tool long before shoes were invented.

The Rarámuri (meaning: Runners on foot) or Tarahumara are Native North American people of northwestern Mexico who are renowned for their long-distance running ability, while barefoot or wearing homemade sandals. Children run to school and home daily barefoot or in sandals. Adult Rarámuri are known to cover upwards of 200 to 300 kilometres in a single run. Additionally their recreation includes a running game called Rarijipari that incorporates a hard wooden ball. Rarijipari games will last up to several days.

Persistence hunting is the earliest known form of hunting, having evolved over two million years. The Rarámuri practice a form of hunting that resembles persistence (or pursuit) hunting that the Kalahari Bushmen of East Africa employ. The Rarámuri will run down birds through successive periods of flight and short rest intervals. This method provides little time for rest because of the constant and unrelenting pursuit by the hunter, the birds drop from exhaustion. Likewise the Kalahari will run down antelope (or Kudu) for example, not by sprinting after them, but by pursuing them until the animal is overwhelmed with exhaustion. Although an antelope can run upwards of 50 kph in a sprint, humans can pursue them for days, barefoot.

The foot, despite popular training dogma, becomes stronger when it is not pampered in a cushioning or controlling shoe. Also, when no support is provided under the arch, over time the arch arches more. Eventually a healthy foot contributes to the stride frequency and stride length as it becomes stronger. A two year case study shows marked improvement in the structure of the foot, where a runner with collapsed arches began practicing running in minimalist shoes and corrected the issue, details of the study are here.

The American Podiatric Medicine Association put out a policy statement back in November 2009 — which they still stand by today — saying that “research has not yet adequately shed light on the immediate and long-term effects of this practice.”

The truth is that running barefoot or in minimalist shoes (shoes with little to no support or cushioning) does indeed strengthen the foot, not in an active manner, but by getting out of the way, sort-of-speak, so that the foot is free to strengthen through natural usage. It is common knowledge that strength in muscles and other soft tissue happens through a process of tearing (or stressing) the soft tissue, then resting or going easy to allow the body to repair the damaged muscles, therefore getting stronger. This is the foundation for any strength-based or fitness work and includes the cardio vascular/cardio respiratory system.

According to the Huffington Post, “…experts say the shoes may actually have a negative impact on foot health.” They wrote, “Barefoot running has been touted as improving strength and balance, while promoting a more natural running style,” a position statement from the American Podiatric Medicine Association reads. “However, risks of barefoot running include a lack of protection, which may lead to injuries such as puncture wounds, and increased stress on the lower extremities.””

Puncture wounds are an unrelated event to the foot’s general development, while in a natural state of movement, stressing and recovering. However, there is indeed increased stress on the lower extremities while running barefoot or in a minimalist shoes; this is precisely the purpose for wearing the FiveFingers. Running with no heel lift allows the calf and Achilles to naturally stretch in run-specific movement patterns as well as allow the foot to move freely as it was naturally intended to do. The foot is a complex structure containing 26 bones and 33 joints.

Leonardo Da Vinci discovered that the foot is an incredible suspension bridge that any engineer would be proud of designing, he wrote, “the human foot is a masterpiece of engineering and a work of art.”

There is some research that claims that barefoot running increases the strength of foot muscles. A study funded by Nike and conducted by the University of Cologne looked at foot muscle strength in runners that used the Nike Free model – marketed as a minimalist-type shoe. The study found that over a five-month period the strength of toe and foot muscles increased by 4-5%. Stronger feet assist in controlling adverse motion.

Part of the suit and settlement states that, “Vibram will not make any claims that FiveFingers footwear are effective in strengthening muscles or preventing injury unless that representation is true, non-misleading and is supported by competent and reliable scientific evidence,” the federal settlement says.

Daniel E. Lieberman wrote an article where he stated that people who wear conventional running shoes tend to run with a significantly different strike than those who run in minimalist shoes or barefoot. This is correct. It is common for people to heel strike while wearing what is considered a conventional running shoe, with a built up heel. The problem with heel striking is it is unnatural. Imagine a runner running up a steep hill, heel planting. They couldn’t do it, as they would fall over backwards. The runner is naturally forced to the forefoot or mid-foot, just as they are while wearing minimalist shoes or running barefoot.

Lieberman authored a study – an experiment that involved five groups of runners from Kenya and the United States. The two American groups were adult athletes who had run with shoes since childhood and those who habitually ran barefoot or with minimal footwear such as Vibram FiveFingers. The three Kenyan groups were adults who had never run in shoes until late adolescence, as well as two teenage groups: those that habitually wore shoes and those that always ran barefoot. The runners were instructed to run over a force plate that was embedded in a 25 meter track, and were recorded during the run using a three-dimensional infrared kinematic system. These measurements were used to assess the pattern with which the foot strikes the ground and how forcibly it does so, the result? Less plantar fasciitis and less ankles sprains.

“I can’t prove this, but I believe when my runners train barefoot, they run faster and suffer fewer injuries.”
— Vin Lananna, Director of Track and Field for the University of Oregon and seven-time NCAA Coach of the Year.

The legendary running coach Arthur Lydiard referred to Plantar Fasciitis as “American Shoes Disease.” Lydiard was from New Zealand and his athletes ran in shoes that provided no support and no cushioning. His athletes did not suffer from Plantar Fasciitis. Joe Vigil, one of the great minds in U.S. distance coaching, values the need for strong feet and ankles, “an excellent runner has very strong ankles, like a ballet dancer.” says Vigil. Vigil has his athletes run explosive hill repeats with bounding exercises to develop power in the feet.

Ballerinas demonstrate the incredible power of well-developed ankles and feet. When they perform a Fouetté jeté (a whipped leap) for example, she lands on her forefoot not on her heels. Her feet are so powerful, so well-developed, she appears to be very graceful, through possessing great foot strength.

One of Vigil’s heroes is the great Emil Zatopek, who was a multiple gold medallist in the Olympic Games. Zatopek achieved similar results as Vigil by running on the spot in the bathtub full of laundry for hours at a time, barefoot. Zatopek became a master at efficiency below the hips, as it is well documented that his form in his upper body was stressed, he ran with a style that was regarded as very painful to watch, yet Zatopek would run 20, 40 or 60, 400m repeats in a single workout and successfully avoid injury.

Percy Cerruty, the brilliant and slightly eccentric Australian coach was well known for having his runners train barefoot in the sand hills of Portsea, Victoria for the very purpose of strengthening the foot and ankle area. Whether running in a tub of laundry or through the sand barefoot, the ankle’s flexibility and power is developed here, not in a cushioned or controlling shoe.

Science is vital, there is no debating this. Science can be described as “intellectual and practical and systematic study of the structure and behavior of the physical world through observation and experiment.” However, it is fallacious to arrogantly adjudge Valerie Bezdek’s claim as having merit simply due to the lack of so-called empirical study by scientists, especially when history indicates overwhelming, pragmatic evidence of its own.