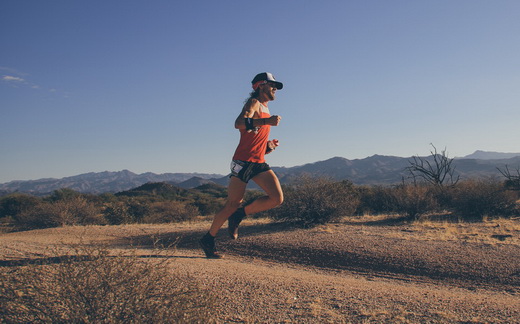 Sacramento’s Zach Bitter is one of the top American ultra-marathon runners. He has won at least 16 events that he has entered including American road championships in the 50-mile and 100-mile distances.

Bitter is known for his ketogenic diet consisting primarily of fats, from a variety of sources, low carbohydrate intake – to as low as 5% of his diet – and moderate protein and fiber intake.

When racing, he steps up the carbohydrate intake a little but remains on the low-carbohydrate, high-fat (LCHF) regime.

The diet is known by various names as LCHF, Banting, Epstein or the ketogenic diet, which are variations of principles to do with a lifestyle of eating, currently popularized by Dr. Tim Noakes, author of The Lore of Running.

Christopher Kelsall: What prompted you to start running?

Zach Bitter: My first exposure was when I was in middle school and I discovered that winning the 1600 meter was way more fun than finishing at the back of the 100-meter dash. From there I would describe it as a slow evolution of learning about endurance training and racing through high school and college. Ultimately, I felt that I got better as the distance got longer, and I seemed to enjoy the long run the most, so focusing on ultra-marathon distances made a lot a sense to me.

ZB: My parents were pretty supportive and encouraging when it came to trying a whole bunch of different sports. I played basketball, baseball, soccer, and football in organized youth sports. On top of that, I did quite a bit of bike riding as a kid. Not structured in any way, but definitely spent most days on a bike to some degree while in middle school.

CK: When you train as high as 170 miles in a week, is there any quality to the week? If so, would it just be by feel like fartlek and tempo efforts?

ZB: 170-mile weeks are pretty rare and typically reserved for my biggest training block for a 100 miler. On average, I typically hit around 120-130 in my main training blocks. Part of the reason is so that I have the energy and recovery required to optimize speed sessions. When training for a 100-miler the variables shift around a bit, so the speed work tends to be heavy on long interval, tempo and progression-style work. I tend to plan them by feel to some extent. I will have a few key sessions I want to complete. I give myself a window of few days to do the key session and within that window the day I feel best I will usually attack the key session.

CK: Who is your mentor?

ZB: That’s tough to narrow down. I like to think that I am pretty interested in people and how they think, so historically when I am excited to learn about things I seek out lots of folks to pick their brain. Nutritionally, I’ve learned a lot from Dr. Jeff Volek and his work. As an athlete and coach, I don’t know if I could pinpoint any one person that I would say I align with entirely, but have loved to read about training methods from folks like Arthur Lydiard, Jack Daniels, and Phil Maffetone.

CK: Speaking of Volek, much has been made about your low-carbohydrate, high-fat diet, while being one of the top ultra-runners in North America. You apparently take as little as 5% of your day’s caloric intake as carbs, but what about close to race day and on race day? Do you take more carbs (train-low/race-high)?

ZB: This is a great question and one that is often confused. The way I view nutrition is that lifestyle plays a big role in how you go about it. Since there are times during the year where my volume and intensity is relatively low; those are the time frames where I focus on dropping my carbs the lowest (5% range).

When I ramp up volume and intensity I’ll let them climb up. At their peak, I’ll usually hit between 20-30% carb intake. These training blocks are often followed by a de-load week where I go really low again to continue to encourage my body to burn fat as a primary fuel source. My rule of thumb is that fat should always make up the majority of my macronutrients, so even when carbs peak, I am still taking in 50-60% fat. When I have an “A” race or target race on the schedule I’ll go really low-carb for 4-5 days at the beginning of the week. Once I get 36-48 hours out from the race, I will start adding back in some concentrated carb sources.

I typically favor sweet potatoes, melons, berries, and raw honey for my concentrated carb options. On race day, I rely on body fat for my fat fuel as a way to bypass the digestive processing of fat. It’s a common misunderstanding that lean athletes don’t have enough fat to fuel an event. Even when I’m at my leanest, say 5% body fat, I have enough fuel in that tank to get through an ultra-event. The fuel supply that is finite is glycogen, so that’s what I replace during an event. The biggest difference from when I was high-carb to now is that I need much less to meet these needs. I typically hit 150-250 calories per hour during a race from mostly Xendurance Fuel-5 and Hydro-X. In the past, when I was high-carb, I’d routinely take in 400-500 calories per hour.

CK: Sounds as though you have completely removed refined carbohydrates from the diet, except when fuelling during a race. How about recovery? Did you notice that you recovered sooner after a race or hard session on a LCHF diet?

ZB: Yes, this is one of the reasons I stuck with this approach. I noticed the soreness and swelling subsided quick, and when it came to getting back into training I was able to feel like I had the pop back in my legs quicker than in the past.

CK: Do you take MCT Oil?

ZB: Yes, I always keep a big bottle of it in my cupboard. I don’t typically use it during workouts or races, but use it in my daily nutrition and occasionally with my pre-run coffee or tea.

CK: Ultra-running seems more popular today than ever, but many of the world records took place during the 1980s through to early 2000s. Do you think the culture of the sport is more participatory and less competitive now?

ZB: I would say priorities have switched. In the 70s and 80s there was a solid culture around flat fast ultras, which is where you see many of the records for road and track ultras. Nowadays, the main focus is on trail and mountain, which is why we have seen nearly every course record fall on the trails and mountains in the past 5-10 years. There is definitely still a strong culture for road and flat ultras, but they tend to be more popular internationally at events like Comrades. Ultravasan, World 100ks, etc…

CK: Would Quentin Cassidy make a good ultra-runner? How many times have you read the section where he gets to while away his time in the cabin, running over soft ground?

ZB: Assuming he doesn’t burn out from too many 60 x 400 meter workouts. It is interesting when looking at men and women who have huge engines and previously have done well on sub-ultra-events, it tends to be fairly consistent that they can figure out 50K to 100K races without too many issues, but when you get to 100-miles there are some interesting variables that don’t make it necessary to have the biggest engine; mainly digestion and managing efforts in the early stages of the race. There are definitely some elite sub-ultra-athletes doing well at the100-mile distance, but it tends to be a bit less consistent than say in the 5K or 10K.

I’ve read that book three times, and haven’t gotten sick of it yet. John Parker Jr. is a great author.

CK: Indeed he is, how about Again to Carthage?

ZB: For sure! Although, I will say that Again to Carthage is a bit tougher to get through in the beginning (unless you are a fishing aficionado), but once you get into it there aren’t any disappointments.

CK: Talking about sub-ultra-runners figuring out the short ultra-races, what about you and the marathon? Do you feel that you could get more out of that event? Or is the damage of racing on asphalt too disruptive to ultra-training?

ZB: I love the marathon as a race distance. I think it is a very unique balance of being just short enough to have to run fast, but just long enough that if you go too fast there’s plenty of time to hurt. I think it is probably one of the hardest distances to truly nail. I switched over to training primarily for ultra-races, before I really knew what I was doing in regards to marathon training, so I definitely feel like I left something on the table at that distance. I’ve used them here and there as very structured workouts, but would love to block out a bit of time and really try to peak for one in the next year or two.

CK: What are your 2018 race goals? Have you considered the Barkley Marathons or perhaps Death Valley?

ZB: Ha-ha, definitely not Barkley… Nothing against the event as I think it is fascinating. It just has too much of the stuff that I wouldn’t enjoy as much training for; like bushwhacking and orienteering. I use to think Badwater was a goal race of mine, but I haven’t been as excited about it recently. The way it is set up makes it an awful lot of hoop jumping and logistics. It almost seems like it is about who can create the best micro climate around themselves so they can run in an unsustainable location. With that said, who knows maybe someday?

My 2018 schedule is a bit up in the air at the moment as I am waiting to see about whether I can get into a race or two. Most notably Western States 100. If I can get in there I’ll definitely target it. I will likely target World 100 km Championships in September and follow it up on a flat fast 100-mile course; maybe Tunnel Hill in Illinois. If I don’t do Western States in the summer, I might try a Comrades-Leadville double in the spring and summer time-frame.