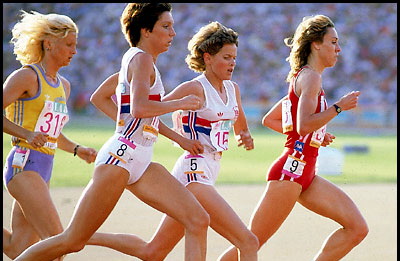 Zola Budd came to worldwide prominence during the 1984 Los Angeles Olympic Games. The focus on her was intense for several reasons, none of which were necessarily healthy for a shy, small-town, 17-year-old girl from South Africa, who simply love to run a lot.

Growing up under the veil of Aparthied, she could not compete internationally while representing her country. South Africa was banned from Olympic competition from the 1962 Tokyo Olympic Games for not renouncing racial segregation. Other sports quickly followed suit including the biggest, FIFA. South Africa was not reinstated into the Olympics until the 1992 Games, which took place in Barcelona, Spain.

In order to compete internationally, having recently taken the world 5000m record (not ratified because of the ban) Budd was urged to seek citizenship in Great Britain by the tabloid newspaper, The Daily Mail. She sought citizenship under the guise that her Grandfather was British. She got her citizenship fast-tracked and ended up on the starting line of the Olympic 3000m final against her childhood hero, Mary Decker-Slaney, whose poster hung on the 17-year-old’s bedroom wall.

Decker-Slaney went down part way through the race and blamed Budd for the incident. It was later revealed that Budd was not responsible, but the damage was done. So hostile was the crowd, Budd purposely slowed down, so not to win a medal, to avoid dealing with the ensuing wrath.

Budd continued to run for Great Britain for a few years breaking several British and Commonwealth records in the 1500m, mile and 3000m distances and that 5000m world record. Budd twice won the World Cross Country Championships in 1985 and 1986.

She was easily recognizable as she raced barefoot. To her this was normal, as she grew up running and walking barefoot at home in Bloemfontein, Orange Free State, S.A. She said, “in S.A. it is not only normal, but kids are encouraged to go barefoot because it is medically accepted that it is better for the development of a kid’s feet to go barefoot.“

Fast forward a couple of decades and we find her representing a minimalist running shoe manufacturer in Newton Running. She is a mom of three kids, wife and a top-level master’s athlete.

Christopher Kelsall: Having grown up running barefoot and later competing internationally without shoes, what do you make of all this new fascination with minimalism? Is it about time?

Zola Budd: It just proves that I was right a very long time ago! I think it is time that even Comrades athletes stop thinking of themselves as just mere runners but actually work on form as well and thus prevent injuries. Running in a shoe that promotes natural running form can help so much to prevent injuries. I must however add a word of caution as well. Please be conservative in your approach to change your running style and form.

CK: What is your role with Newton Running?

ZB: I promote Newton in the US and we have the rights to distribute Newton shoes in S.A.

CK: Do you promote shoe models or are you more promoting the 10 laws of Newton’s Natural Running?

ZB: I promote Newton shoes as well as to get people to run more efficiently and more naturally.

CK: Have you read Chris McDougall’s book, Born to Run?

ZB: Yes, I have and it is amazing.

CK: Looking back on the 1984 Olympics, would you have done anything different?

CK: What did running mean to you once you became an international-level athlete? You have said you were “at peace” while running, but was it escapism or did you just take on all the reality that you were dealt?

ZB: I think when I became a professional runner, running became a job and I lost a lot of passion for running. Winning became so important. Now I can really enjoy my running by still being competitive.

CK: Do you have master-age goals to achieve – going after any world marks?

CK: Do you have a marathon event in mind and a date?

ZB: Probably the marathon in Jacksonville, Florida in December.

CK: How much training do you put in these days?

ZB: I still run every day.

CK: Do you keep track of your volume or total time spent?

ZB: Both, depends on where I am in my training. Some days volume is important, other days it is quality.

CK: Do you have a good network of trails nearby?

ZB: Not really, but I try to run in the forest close by. It is difficult in winter when the hunting season starts.

CK: If there is any time not to run like an Gazelle, that would be it. Are your kids showing any interest in running?

ZB: My oldest daughter runs a bit at school, but nothing serious. I encourage them to be active but not competitive.

CK: You running for Great Britain as a person from South Africa, was at the time frowned up by the international community. Not so much because of the switch, but because of Apartheid and what you “apparently” represented by doing so. What are your thoughts on the migratory habits of the athletes today?

ZB: I think they should apply the same rules to all the Kenyans who run for other countries, as what they applied to me!!! Just kidding. It was all a political game at that time and people did not matter.

CK: Apparently, you were a fan of running or you had your heroes while growing up. Do you continue to follow any athletes or the sport generally speaking?

ZB: No, not really. My TV time was hijacked by my kids wanting to watch Powerpuff Girls and I don’t like watching sport. I’d rather read a book or watch Animal Planet.

CK: What were the key differences between training in SA and the UK?

ZB: Friends. At home I trained with a group of close friends which I really enjoyed. In the UK I did most of my training alone. The town I came from had many great athletes and I used to watch them training and racing while growing up. There were athletes like Xolile Yawa, Bethuel Seribe, Jan Olyn and many others. Most men could run well under 30 minutes even at altitude, some of them under 29 minutes. On the track there were women who ran under two minutes for 800 and under 4:10 for the 1500m. They were the people whom I looked up to.