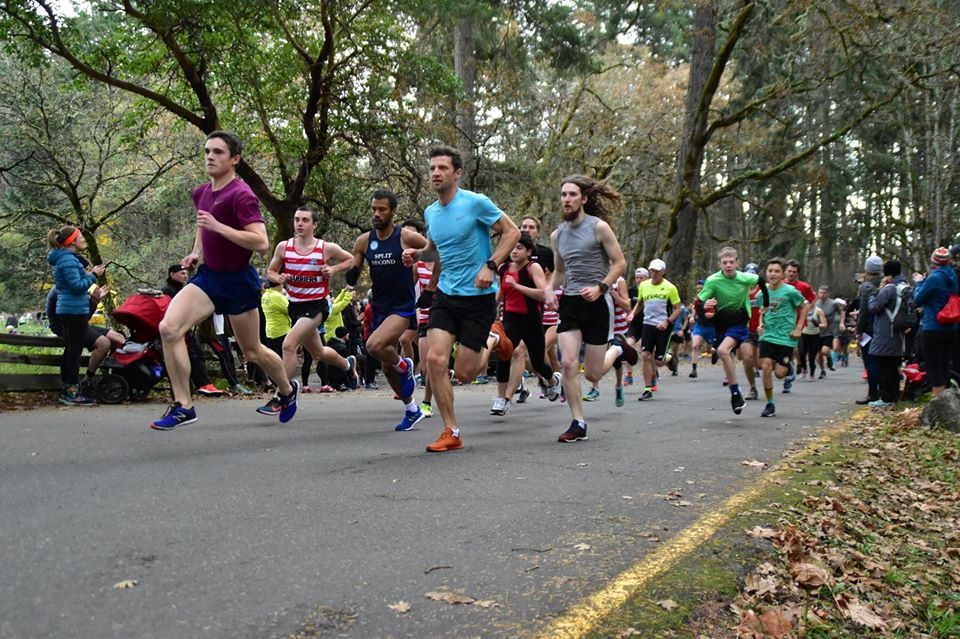 The 2019 Thetis Lake Relays ran Monday, on Remembrance Day, at Thetis Lake Park in Victoria, BC.

The senior mens team that won the event also earned the nod for the worst team name. Victoria Sunday Lawn Bowling Society — Second Sextennial Shindig finished the near 20K loop in the time of one hour, four minutes and 10 seconds (64:10). The latter part of the name is a reference to their last win seven years ago as the Victoria Sunday Lawn Bowling Society.

Second place went to the team named Split Second – Endur who finished in the time of 64:25. And the third-place team were the Quad Fathers in 79:12.

After the first leg, the Lawn Bowling Society team was in second place with starter Sean Chester off with a good effort of 15:37. He was bettered only by Split Second’s Matthew Winkler who finished in 15:22.

During leg two, the Lawn Bowling Society’s Elliot Bassett lost a position, but it was gained back with runner number three Adam Buzinski. Ian Searle took the lead during the anchor leg at approximately 19.5K into the race to capture the win at the last moment. He was coming off of his second-fastest marathon from Toronto, where he ran 2:38:22.

“Yeah Sean started us off in second place, but then I lost a spot,” said Bassett.

With tongue firmly planted in cheek, opening leg runner Sean Chester corrected, “It was never lost, he simply misplaced it.”

“And I was expected to lose more, so that was okay,” added Elliot.

That spot was later “found” by Buzinksi.

Regardless, Searle helped pull out the come-from-behind win with an approximate 15:35 finish leg – finish times are recorded by the honour system.

The top three senior womens teams (20-39) were local run club teams STARR called Starr Struck with the win and CEEVACS with the second and third-place teams. Their teams were named The Comeback Kids and Collective Soles, respectively.

The Thetis Lake Relays is event number one of the three-event Thetis Lake Triple Series, which includes the Gunner Shaw Cross Country Classic 10K and the Stewart Mountain 10-mile.

Race calendar and full results will be available on the Prairie Inn Harriers website www.pih.bc.ca.