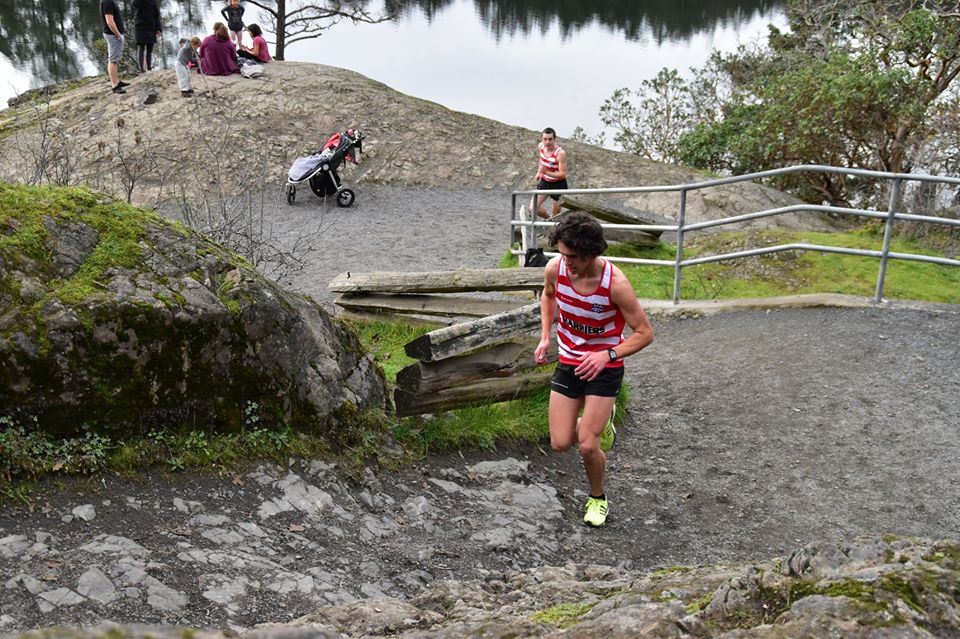 While the northern hemisphere is deep into cross-country season, there are still some lingering marathons like Valencia and Sacramento among others that are on tap. In Victoria, British Columbia on Vancouver Island exists a set of trail races that are must-dos for near-winter running.

All three races are part of the Thetis Lake Triple series. They encompass the Thetis Lake Relays, Gunner Shaw Cross Country Classic, and the Stewart Mountain 10-mile and 5-mile races. The latter is a true character builder, well all three are.

Unlike many places in BC, named by explorers or indigenous people, Thetis was a mythological sea goddess from Greek ancient history. Although the lakes are fresh water, the island is surrounded by ocean. Like the ghosts of Halloween, Thetis cannot be far away. In fact, from most of Greater Victoria, it is but a 5-15 minute drive.

Creative team names are in vogue, some of them slightly haughty, some silly, “The Sparrow Farts,” was the funniest team name one year. The joke was on the team though, as the host Prairie Inn Harriers Running Club gives its members free entry. The prize? You guessed it, free entry. No win; no fowl as it was indeed a Harrier team named the Sparrow Farts.

About 3.5K into the 5K lap (4.8K) the hills start, they get comical at one point, where even the most competitive athlete ends up on their toes and try not to laugh at the ridiculousness — but it’s great training. That might be why the internationally competitive Harriers Youth Team and the USport’s UVic Vikes will take in the event.

As the former and yet defacto race director, Bob Reid, long ago coined, “at the top of every hill is a gift, a downhill.” And in this case, if one has the wheels, the finish is downright fast.

There are no bibs, baton, timing system, or formal exchange rules, but cameras are rolling and the eagle eyes of Reid are watching. Results are based on the honour system. Write down your time and add them up with your teammates.

Usually, it rains, often hard. The forecast for the 2022 edition, you guess it, is for rain and wind and cool temperatures. This won’t likely stop people from jumping into the lake at 4 or 6 degrees centigrade, in fact, it will encourage them.

Cliff jumpers may be heard whooping it up a few hundred metres up the rocky west side.

Recently, the bordering municipality of Langford has allowed development with an eye for density. The Lakes, once devoid of people during the fall, winter, and spring, except for the hardiest, are now populated on weekend mornings with hoards of baby stroller-pushing parents carrying their lattes in one hand and cell phones in another.

But that local long-running government lost the most recent election due to the unending development of green space. But not all is lost.

The Harriers helped raise funds for a local organization called The Land Conservancy which fundraises to purchase private land and turn it over to the Capital Regional District to turn those properties into parkland. Top secret to mostly runners, one can get off the main trails and spend days trekking around the connecting Thetis Lake, Freeman King, Millstream, Mount Work, and many other parks available for long runs.