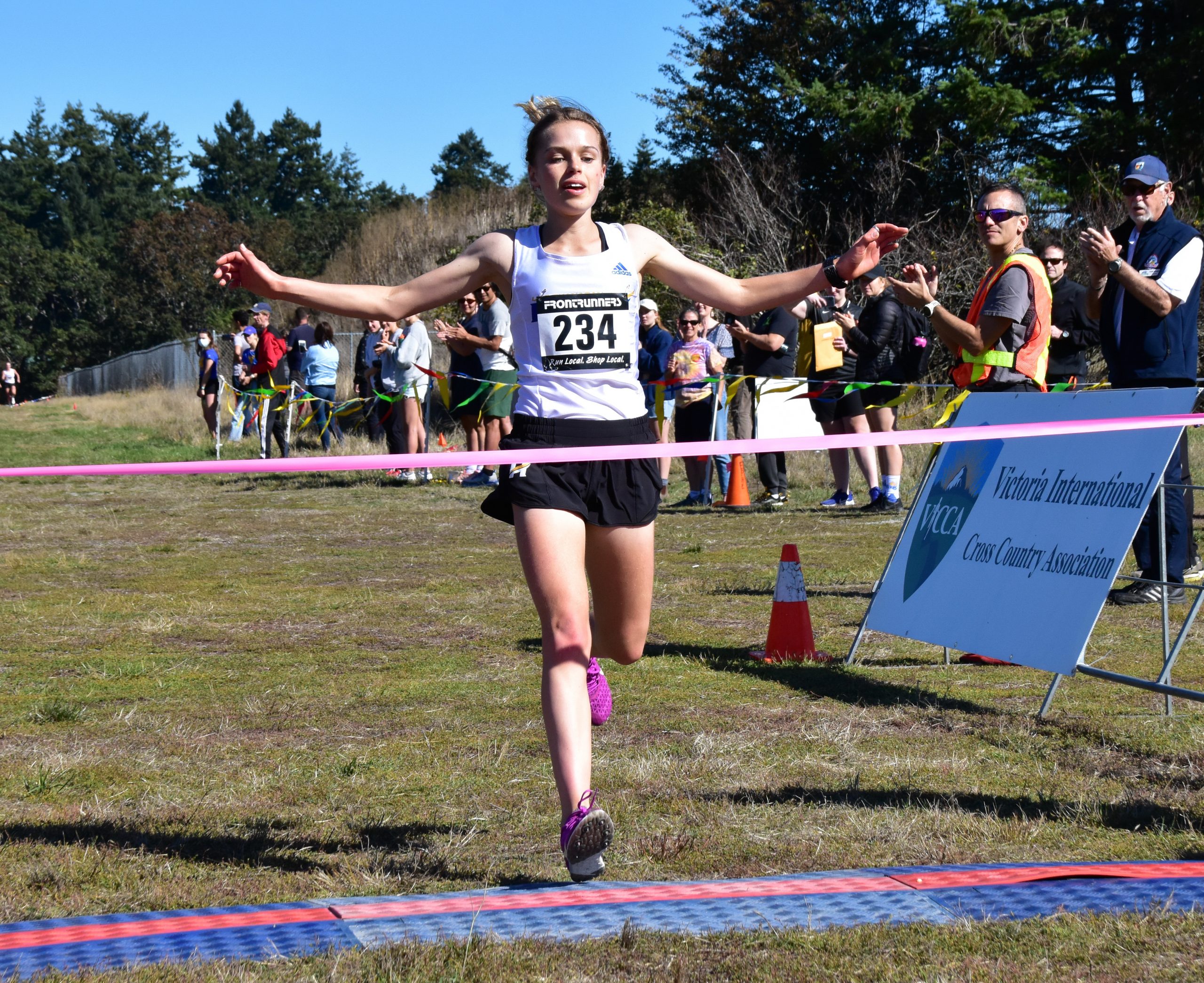 The first cross-country race to take place on the campus of the University of Victoria in 30 years happened Saturday at the newly minted Cedar Hill Corner. The university is providing the area of land that may be slated for future development, but for now, it’s a great area for training and racing — Vikes head coach Hilary Stelllingwerff took advantage by hosting the Vikes Cross Country Open.

An equal number of 45 men and 45 women started the two races, which included a few masters and junior-age runners.

For UBCO Heat athlete Lauren McNeil it was a case of getting to the front, and building on the lead. She led from gun to tape over the flat and fast three-lap, six-kilometre course. The Buxton, UK native clocked a finish time of 21:16.81 for the win.

Her front running spread the field early on, but Heat teammate — 2020 Tokyo Olympian (triathlon) Joanna Brown — finished 29 seconds back. She wasn’t taking it easy either as she finishing eight seconds up on Thunderbird Jamie Hennessey who took third.

McNeil is on an exchange program from England and has settled in Kelowna. This year, she finished sixth overall at the English U20 national championships.

Asked if her game plan was to go out hard to test the field she said, “No, I just went out with how I felt. I didn’t know what to expect. I felt good, so I pushed it hard.”

She didn’t seem to lose her rhythm over the series of hay bales that were laid out at approximately the 1K mark into the 2K loop.

Her coach Malindi Elmore finished ninth during the Tokyo Olympic Marathon in Sapporo. Asked how she felt about having Elmore as a coach and the adjustment to the desert she added, “It was hot when I first got here, but the weather has been mixed over the last bit, so I have adjusted, but I am used to more mud. It is great being coached by Malindi. It hasn’t quite sunk in yet that she is an Olympian.”

The Thunderbirds team finished first with the low score of 25, while the Heat was close behind for second with 38 points. The Vikes finished third with 84.

Also in the race was 2019 Aarhus World Cross Country Championships competitor Katelyn Ayers from Orillia, ON. She finished sixth and ran unattached.

Like McNeil and Brown for the Heat, Thomas Nobbs and Tyler Dozzi went 1-2 for the Thunderbirds. And like the women’s race, Nobbs dominated the field and Dozzi stayed well entrenched in second place throughout. However, the chase pack in the men’s race nearly went to the wire for an exciting finish.

Nobbs clocked an 18:11 finish time, while Dozzi finished 37 seconds back.

The fight for the third position was between Vikes Brandon Vail and Matt Thibodeau as well as Thunderbirds Spencer Hardy and Jonah Brost. Vike Jack Boden wasn’t far behind nor was Thunderbird Josh Kozelj. They ended up finishing with a 13-second spread, but not after a hard-fought third lap where the lead changed several times. Vail prevailed.

“It was good, I have been training since only June because I had an injury, so it was good to get this race in and compete well,” shared the Edmonton native.

As for Nobbs, he said, “I like going to the hurt locker. It’s fun.”

Asked about the pre-season-like event he said, “it’s great seeing the universities come out and race and giving the younger athletes an opportunity to race cross-country and to learn to race this type of an event. I am looking forward to the season ahead, which continues in a couple of weeks at the Trinity Western University meet.”

UBC Okanagan finished third in the team category with 77 points, the Vikes collected 43, while the Thunderbirds ran away with the second team win with just 22 points.

There was a bit of a homecoming for several athletes as Thunderbird Kozelj wore the Vikes’ uniform for three seasons, although he hales from Coquitlam. Dozzi originally from Terrace, BC moved to Victoria as a teenager to attend the successful program at Oak Bay High School, Brost is a Stelly’s High School grad and Liam Dwyer who finished ninth attended nearby Mt. Doug Secondary.

The Spartans’ event takes place on Oct. 9 in Abbotsford at the Clearbrook Park site, where the provincial club championships have been held several times over the years. The next meet to take place in Victoria is the BC Club Cross Country Championships at Beaver Lake Park. The host club is the Prairie Inn Harriers.