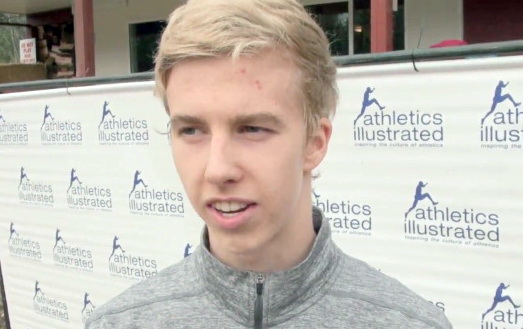 Thomas Nobbs who currently attends Point Grey Secondary School is one of Canada’s best high school runners. The Vancouver native announced his commitment to run at the university level close to home at the University of Washington.

Asked why he chose Washington he said, “My visit to Washington was impressive. Spending time with the team and the head coach gave me a chance to get a view of the college environment of a track athlete. Coach Metcalf set out a series of goals he felt I could attain through my college career and it was his enthusiasm and energy that was most inspiring.”

Nobbs will start in the fall of 2017 and will take Biology to transition into medical school. “This is with the goal in mind to earn a degree and become a sports medicine physician,” shared Nobbs.

Nobbs recently competed in the 2016 BC Club Cross Country Championships that took place in Nanaimo’s Beban Park on October 29th. He had a rough race and decided to just finish. He was a little dejected.

He had a very good comeback race one week later in Kelowna at the 2016 BC High School Championships finishing second to Victoria’s Tyler Dozzi, who had the race of his life.

In regards to the Nanaimo race Nobbs told Athletics Illustrated, “I made a few elementary mistakes that led to the result including tactical and under-fuelling. In the Kelowna comeback he said, “I thought I could race with the best athletes and I felt I had the race, but Tyler Dozzi just took it on the downhill with a great finish.”

In regards to Washington, “coupled (the impressive visit) with a strong team environment, a great academic school, the chance to compete in such a strong conference, which the PAC 12 is, at the highest level in the first division of the NCAA,” added Nobbs. “And the closeness to home and family made it my number one choice,” added Nobbs.