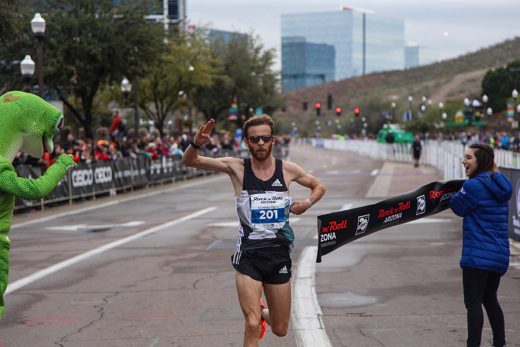 With most of the country in the throes of winter, thousands of runners took to the streets of Phoenix, Scottsdale and Tempe this weekend to participate in one of the American Southwest’s best races: the Rock ‘n’ Roll Arizona Marathon & ½ Marathon.

Thirty-two-year-old Thomas Puzey of Flagstaff, Arizona was the first runner to cross the marathon finish line at Rio Salado Parkway in Tempe under cloudy skies and temperatures in the 50s. Puzey’s win was a commanding one with a two hour, 19-minute, and 57-second finishing time. His nearest competitor, Roosevelt Cook, was over three minutes behind in 2:23:48. Third place in the men’s marathon went to Naamn Weldeyohans (2:24:11).

“The East African guys that came out made it a tough day. I didn’t expect to beat them,” said a surprised Puzey, who won the marathon last year. “Luckily it was a long race. I was able to outlast them. After 20 miles, it came down to just making it to the finish line.” Puzey, who is the father of three young daughters, calls himself a “blue-collar winner” and was happy that he prevailed. “I run to make some bread and I did that today,” he said.

The women’s race was also a solo affair with Bailey Drewes of Ithaca, New York winning in 2:42:50. McKale Montgomery was a full eight minutes behind in 2:50:54, while Anna Corrigan was third in 2:56:11.

A half marathon was held in conjunction with the marathon. Jeffery Eggleston broke the tape in a blazing 1:04:50. His nearest rival was Tyler Jermann who finished over a minute behind in 1:05:57. Harry Dixon rounded out the podium in 1:06:11.

Afterwards, Eggleston, who made his marathon debut in Arizona back in 2010, said he was pleased with his win. “I was trying to do a marathon-pace run out there. It started out quicker than I wanted it to be. I got a bit excited. The conditions were good overall.” Eggleston had not run a fall marathon last year and began his marathon training in December. He hopes to race 26.2 miles next month in Japan. “I would like to thank the Rock ‘n’ Roll races for helping me sharpen my knives. I just love coming to these races.” On Sunday, Eggleston’s wife, Ali Clark Eggleston made her debut and Jeffery said that watching her train for the big race was incredibly motivating. She’s been so dedicated and committed. I’m super proud of her. I can’t wait to give her a kiss at the finish line.”

Neely Spence Gracey prevailed in the women’s half marathon with a commanding 1:12:39 win for the 13.1-mile distance. Maor Tiyouri (1:15:47) and Courtney Marie Olsen (1:18:48) took second and third respectively.

“I’m really pleased with how I did today,” recalled Spence Gracey, who was running her first race of the year. “I had written out the goals on my hand. There were four of them: to find my rhythm, to focus my mind, and the third was to fight through fatigue, and the fourth was to finish strong. I think I accomplished all of them.”

Spence Gracey said she wasn’t trying to run a specific time, but that she instead wanted to find the right rhythm out on the Arizona course. “I was able to do that. I loved the bands out there. I loved the crowds. I’m glad that I was able to come out there and take part in this big party. I look forward to the next Rock ‘n’ Roll race in New Orleans.”

Elite runners and fast times aside, Sunday’s races were all about the party. Alternative rock band Toad the Wet Sprocket took to the stage as the headliner for the Toyota Rock ‘n’ Roll Concert Series, getting runners and their families to their feet with their big hit, “All I Want.”

The 14th annual Rock ‘n’ Roll Arizona Marathon & ½ Marathon will take place the weekend of January 14 – 15, 2017. The fast and scenic courses will give runners a first class tour of the desert cities of Phoenix, Scottsdale and Tempe. Runners can rock to the sounds of live, local bands, along with enthusiastic cheerleaders to keep participants moving. The event concludes with a post race concert and finish line festival. A two-day Health & Fitness Expo kicks off race weekend at the Phoenix Convention Center on Friday, January 13 and Saturday, January 14. The Expo will have numerous vendors featuring the latest in running gear, nutrition and training tips. To register for the race or for more information, visit RunRocknRoll.com/Arizona or follow us on Twitter @RunRocknRoll.