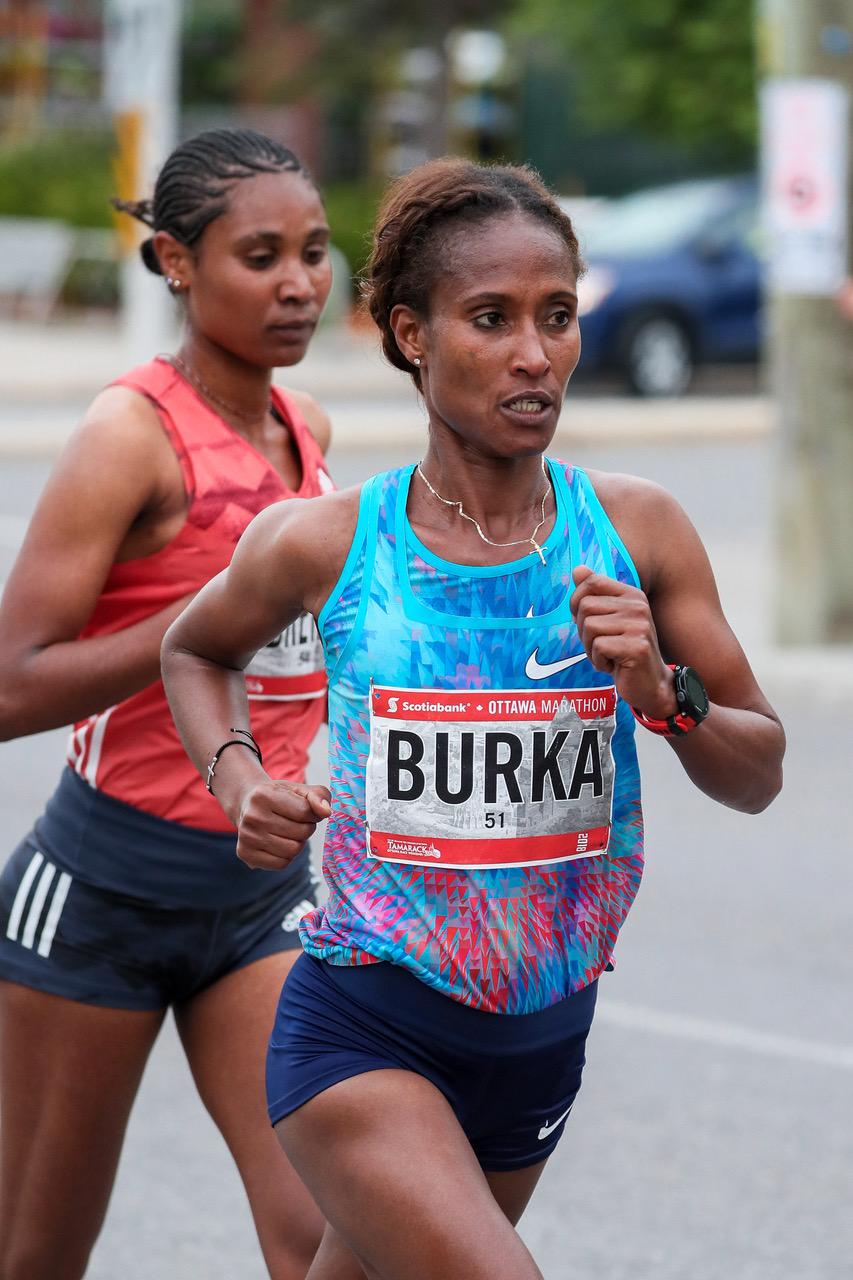 Gelete Burka, one of Ethiopia’s most accomplished athletes, will contest the 2022 TCS Toronto Waterfront Marathon on October 16th.

A three-time Olympian for her country, Gelete was also the 2008 World Indoor 1,500m champion and 2006 World Cross Country champion. But when she won the 2017 Ethiopian World Championships 10,000m trials and was not selected for London, she turned to the marathon. Her results in the classic distance have been sublime.

This will be only the second time the 36-year-old star has raced in Canada. On her previous occasion in 2018 she set a Canadian All Comers’ marathon record of 2:22:17 in Ottawa, despite running with stomach cramps and completely alone for much of the race.

That record was beaten by one second at the Toronto Waterfront Marathon by Kenya’s Magdalyne Masai in 2019. The pair will battle in Toronto.

“My training is going well and I am so happy with my training,” Burka says from her home in Addis Ababa, the Ethiopian capital. The WhatsApp call had been delayed by a couple of hours when the lights went off during a power outage.

“We have two months until the race and I’m just working hard,” she adds. “It is sometimes raining here. We look at the weather and choose training places. We are working hard in Sendafa, Entoto, Sululta, Arafat. We train in five or six different places.”

Coached by Getamesay Molla, the group of elite runners she belongs to meet in those various locations all within half an hour of Addis by car. In a radical departure, Gelete even spent most of the month of July in Colorado Springs, Colorado where she joined Kenyan born US coach Haron Lagat. It is the rainy season in Ethiopia and heavy rains adversely affected the dirt roads back home.

“It’s nice for training there,” she says of the Colorado Rocky Mountains. “I was with some friends in the US Army Athletics (group). Do you know Haron Lagat? I was with him working there in Colorado Springs before the marathon training.”

Gelete had expected to race Ottawa earlier in May but although her Canadian visa was approved, she did not receive her passport in time to travel to Canada. After training for six months specifically for the race, the disappointment was enormous. It is not easy to train to peak for a specific marathon and then have to find an alternative. In any case, Ottawa is amongst the final spring marathons.

“One week I was sick. I was so heartbroken,” she reveals with a smile. “I haven’t any business, my only business is working in athletics. I just focus on my running. A little bit I was angry because I worked so hard. It is not like track racing.

“It was a big disappointment but sometimes you forget something that happened in life. I have forgotten it and now am only focused on Toronto.”

Family is everything to her and currently her youngest sister together with her niece, Deborah, and nephew, Muse, share her home in Addis. After returning from Colorado, one of the first things she did was travel back to visit her mother and her other siblings in Shashamane, one of the main towns in Arsi. It is also known for its large Rastafarian community.

A devoted Christian, Gelete is also a member of the 40-member choir at the Glorious Life Church in Addis. They sing in Amharic, Oromo and English at two weekly services. In addition, she is an usher at the church and so must attend meetings and choir practices when called. Her faith is important enough that following her 2018 Ottawa victory she sought out an Ethiopian church to attend.

Given the news that Magdalyne Masai shaved a second off her Canadian All Comers record in 2019 – and will face her on the Toronto starting line – Gelete smiles. Asked whether Masai’s  2:22:16 standard will now be a target, she thinks for a moment.

“You have to see in the race how you are feeling and also what she is feeling,” Gelete explains.  “In a race you think of records when your body feels ok. For now I am not sure. I will look inside the race for what I can do.”

Ethiopians were overjoyed with the performance of their 2022 World Championships team in Eugene, Oregon. With 10 medals, Ethiopia finished second in the medal table behind the host USA. Seeing her compatriot Gotytom Gebreslase take the women’s marathon gold was extra special.

“It is still in my head that I want to run under 2:20,” she says, “because you see the world championships I am so happy (Gotyom) ran 2:18.  After you see in championships they are running 2:18 then I think under 2:20 (is possible) if the body is ok and the weather is ok. And, if the others want to run a very good time.”

Clearly this Ethiopian superstar has bold intentions for her future. Her race against Masai in this World Athletics Elite Label race is a tantalizing prospect.