Whatever happened to him? He was on top of the world, but as the saying goes, the bigger you are, the harder you fall.

Tim Montgomery had it all.

Money and fame, records and endorsements. Even a Nike commercial.

Montgomery, who transferred from Blinn College in Texas to run track at Norfolk State in 1994, won a silver medal in the 400-meter relay at the 1996 Atlanta Olympics, then a gold in the same event at the 2000 Sydney Games. And in 2002, he ran the 100 meters in a world-record time of 9.78 seconds.

Then his world came crashing down.

Read on to find out what happened to Tim Montgomery 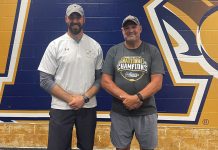