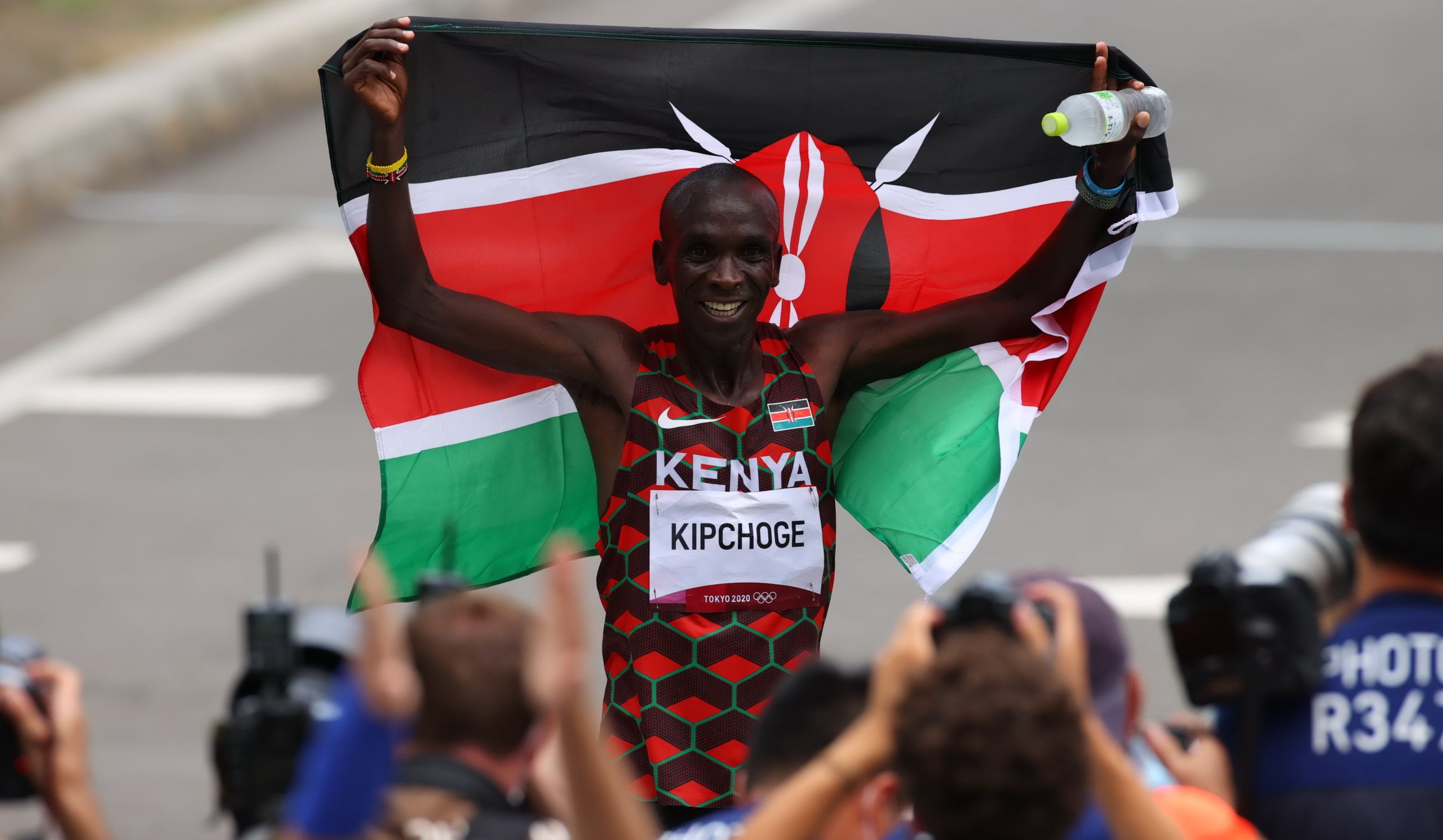 From Spyridon Louis’s win during the first modern Olympics in 1896 at home in Athens, Greece, to Eliud Kipchoge, on the streets of Sapporo, the marathon has been the flagship event at the Games. For the Tokyo Olympics, the Sapporo, Hokkaido-hosted marathon was as thrilling as any.

Kipchoge defended his Olympic title in the heat with an impressive 2:08:38 performance. The temperatures affected many competitors, with several top-level contenders unable to handle the pace in the hot and humid conditions. At 30kms, Kipchoge dropped a 14:28 5km split to increase his margin and run away for the win. Prior to that a bulging pack of up to and over 20 athletes slipped along the streets of Sapporo at a pace ninety percent of the world couldn’t run for a total of three minutes, never mind over two hours.

Kipchoge is the third man ever to win back-to-back Olympic gold medals and now holds two of the top five fastest times ever recorded in Olympic history. This title, along with his world records, makes him arguably the greatest marathon runner of all time. And, some like to refer to him, “Buddha”.

The previous athletes to accomplish the double are Waldemar Cierpinski of East Germany in 1976 and 1980 and Abebe Bikila of Ethiopia in 1960 and 1964.

“The Olympic dream is a special dream. For every athlete here, it has taken a lifetime of preparation to get to this point. Today I lived my Olympic dream. I always say that sport is like life, whereby you can win and lose. But today was a day where I won and get to say I successfully defended my Olympic title,” Shared the 36-year-old Kenyan. “I want to share thanks to the people of Japan and the Olympic organization for an incredible job in making these Olympics happen. Thank you to the fans around the world for all your love not just this year but throughout my entire career, you make me speechless and humbled. Thank you to my teammates, coaches, partners, management, friends, and family. This gold is for us all. A running world is a happy world.”

Finishing in second place was The Netherlands’ Abdi Nageeye. Nageeye finished 11th in the marathon at the Rio Olympic Games and won his first Olympic medal — a silver — finishing in an impressive 2:09:58 on the streets of Sapporo.

“It is incredible. I wanted to wait until 35K and see what I could do. I believed in myself, and I was thinking, that I have to take home a medal. I am so happy for the Netherlands,” added Nageeye.

Finishing in third place was Bashir Abdi of Belgium in the time of 2:10:02.

The top Japanese athlete ran an impressive race, clocking a 2:10:41 time for sixth. Galen Rupp of the US, who earned bronze in the event in Rio, finished in eighth in the time of 2:11:41. A whopping 30 athletes retired before the finish line. Top-40 results are listed below.

How does Tokyo stack up in the anals of the Olympic marathon?

With human drama ever-present, from a defrocked priest in Athens 2004 tackling Vanderlei de Lima of Brazil or the very odd circus-like Olympics of St. Louis in 1904 — the specter looms. St. Louis was the site of an odd 24.85-mile marathon. The temperature soared into the mid-30s (90s F). Fred Lorz took an 11-mile ride in a car to get over his cramps, waving to spectators and competitors along the way. He somehow thought that was perfectly okay. Some athletes were to consume strychnine to carry on.

Sami Wanjiru’s brazen solo run on the streets of Beijing in 2008 suggested to everyone watching, it is possible to run fast in the heat. Frank Shorter — credited with helping the American running boom — won gold during the 1972 Munich Games; an indelible moment, to be sure. Few if anyone remembers Karel Lismont of Belgium finishing second, such was Shorter’s influence. However, everyone seems to remember the amazing John Treacy of Ireland in ’84, Lee Bong-ju of South Korea in ’96, or Mebrahtom “Meb” Keflezighi taking silver in Athens for the US — some second-place finishers do get remembered.

Does he still have it?

A beautiful, tree-lined, and spectator-friendly looped course notwithstanding, Tokyo or Sapporo delivered simply due to the Buddha’s presence. The question on every spectator, delegate, volunteer, coach, official, sponsor, media, and athlete’s mind was, does he still have it?

Kipchoge, considered infallible up to 2020, had a rough go in London on Oct. 4 last year. He holds the world record at 2:01:39, has run sub-2 in the Nike-arranged spectacle of a time trial in Austria, where he clocked a 1:59:40. Buddha won eight consecutive World Marathon Majors including four in London, three in Berlin, and once in Chicago. He has also won Hamburg, Rotterdam, and the NN Mission Marathon in April this year. At least four times he has run sub-2:04:00 and at least 12 times under 2:06:00. In short, his marathon career has been the epitome of greatness. Kipchoge had nothing left to prove but he toed the line anyway.

When Buddha won in such a commanding fashion, everyone breathed a sigh of relief — except, perhaps for the three Ethiopians who were decimated by the heat and had to withdraw — mostly all are thankful that they live in the time that the Buddha was at his best.

Although there has been a youth movement in the marathon over the past few years, of the 117 athletes who were registered to start the event, 70 are age 30 or older. Two were born in the 1970s, 49 during the 1980s. The eldest is 44-year-old, Abdi Abdirahman, who acquitted himself well with a 41st place finish, clocking a 2:18:27 finishing time. Considering the American owns a best of 2:08:56 and qualified with a top-3 placing at the USATF Olympic Marathon Trials in Atlanta, GA with a 2:10:03 performance, he did well.

A pair of Eritreans, Oqbe Kibrom Ruesom and Tachlowini Gabbriyesos, tie for the youngest at age 23. Both are registered as born on Jan. 1, 1998 (likely due to a lack of record-keeping). The latter is the co-flag bearer for the Olympic Refugee Team. Ruesom has run as fast as 2:05:53.

But it appears, at least for now, the legendary marathon event continues to be a mature athlete’s game. The top-6 finishers range in age from 30 to 39 with Buddha at 36 taking gold, Nageeye, and Abdi, both 32, taking silver and bronze, respectively.