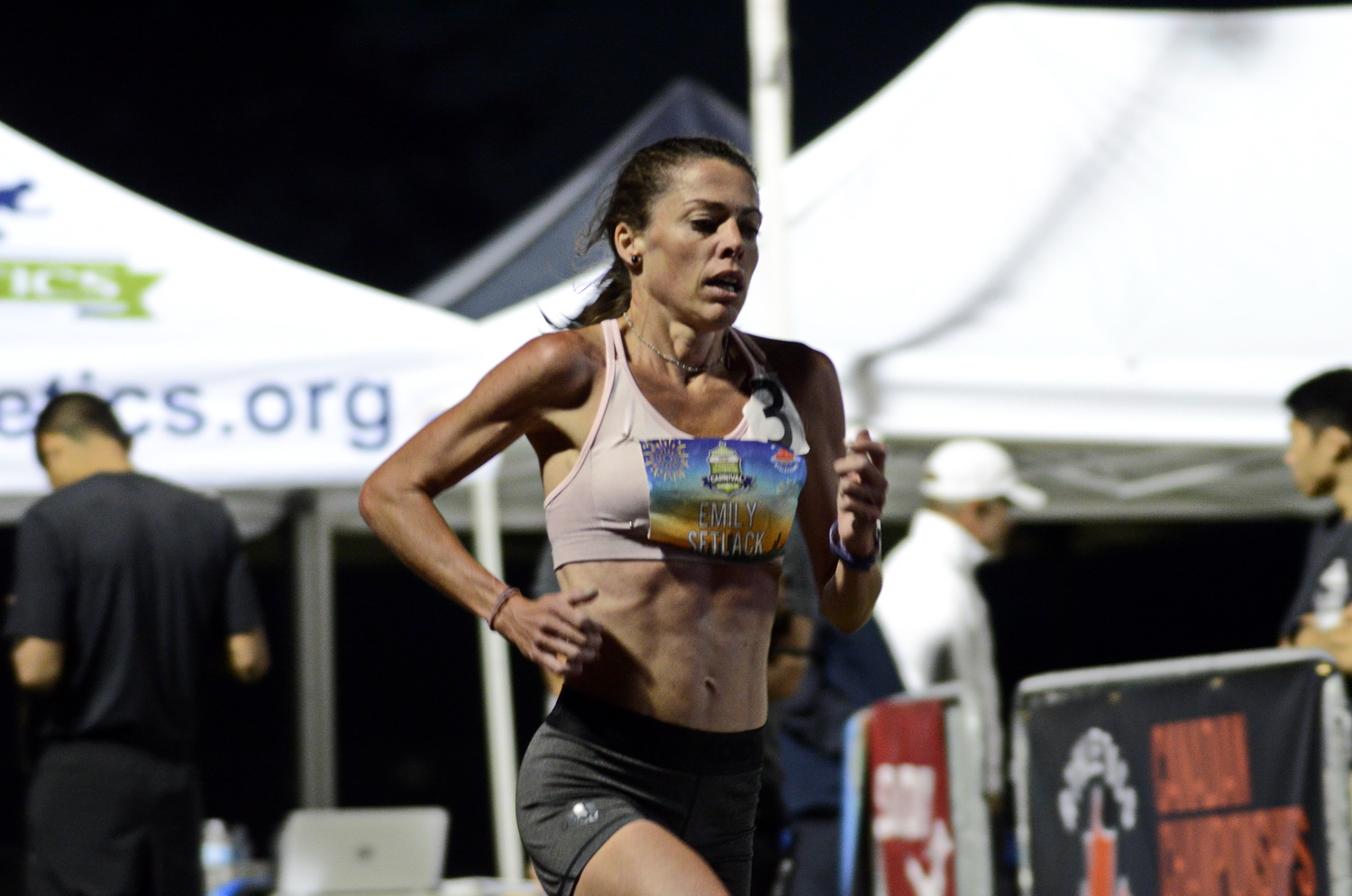 Emily Tallen-Setlack’s 2:29:48 Scotiabank Toronto Waterfront Marathon result represents her personal best and is one of the fastest Canadian performances all-time. The time is just 18 seconds off of the 2020 Tokyo Olympic standard. But she could have run faster – expect to see her toe-the-line again during spring 2020.

The Kingston, ON resident finished as second Canadian behind Vancouver’s Dayna Pidhoresky, who also ran to a new personal best time – by seven minutes and five seconds – to cross the finish line in 2:29:03, 27 seconds better than the Olympic Standard.

“I definitely had my eyes up trying to close on Dayna. At 30K, I could see her and I definitely thought I would catch her if I held pace and didn’t do anything stupid like throw in surges or uneven pacing. It felt like a risk and at the time I didn’t think it was a risk I needed to take, but I could see we were closing,” said Tallen-Setlack. “I was afraid I would bonk–she was about 400-500m ahead of me and I tried to focus on running steady to close the gap. I was a bit scared that I would hit the wall but it never came. My legs never felt heavy and didn’t feel like I was falling apart at any point in the race. If I could run the race again, I would be more aggressive at 30K and take the risk.  I do think I should have been hurting more than I was.”

Her previous marathon personal best was set in April this year when she ran the Rotterdam Marathon in the time of 2:35:47 in warm and humid conditions – a race that suggested that there was more to come from the Kingston, ON runner.

At the time, she told Athletics Illustrated, “I started off in about 6th or 7th position overall for women and slowly closed the gap on Jordan Hasay (who was probably doing a workout) and Kelsey Bruce. “It was quite humid and I really felt the warm temperatures at 12K into the race. I tried to focus on getting to mile nine (15K). I knew if I could maintain pace until that point, I could hang on for another 23 minutes of hard running.”

Although she has been well-coached over the years, her switch to Jim Finlayson of Victoria proved to be a fruitful move.

Toronto was a big day as only a handful of Canadian women have run under 2:30.

“What a day! What Dayna and Trevor (Hofbauer) did Sunday was what we all dream of, to be a part of that felt really special,” She added. “It was heartwarming to see Trevor’s family alongside him and Dayna’s husband Josh at the finish there to share the joy. I was too busy crying for Dayna, Josh and Trevor to process my race at the finish. Dayna executed that race so well yesterday and I am incredibly happy for her, I think we all knew she was capable of that time, so it was nice to see her execute such a great race.”

Many great performances come with the help of pacers who can take the stress out of keeping on task and is someone an athlete can trust in. As marathons go, it can be difficult to trust one’s own self. Fatigue can lead to self-doubt and can create trouble with sorting out splits late in the race. Tallen-Setlack enjoyed the benefits of solid pacing.

“I never thought a marathon would be fun, but it was. I had a really supportive group to race with. Adam Hortian selflessly paced our group to 33K before the pack splintered and I was fortunate to have his help until 39K. We ran fairly even throughout the race, going through half in 1:14:00, however, the second half of the race is slightly slower.”