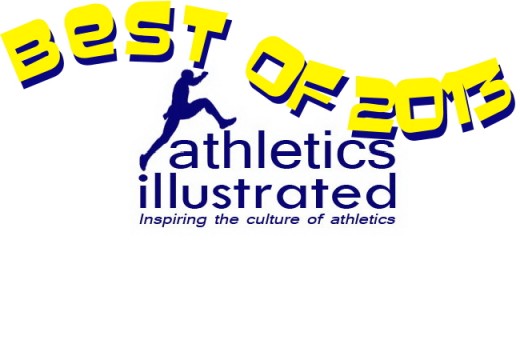 To decide what was the biggest piece of Canadian athletics news during 2013, would be a decision based as much on personal opinion as reader engagement as well as activity in the ever expanding and highly active social media playground.  The most intriguing piece of news may not be the most shared piece of news. Several factors come into play. So it is with this paradigm of factors, I choose to not rank something as ubiquitous as “biggest piece of news” or “best story” et al., but rather share a few of the more compelling stories.

Cameron Levins signing up with the famous Nike Oregon Project, to work with the legendary Alberto Salazar was a big piece of news however, since the 2012 London Olympic Games 11th place finish in the 10,000 metre race – while being under-the-weather – we haven’t seen the fruits of the partnership, yet. Emphasis is on the yet! >>Read the story here.>>

High Jumper Derek Drouin winning the Bowerman award was big news on two fronts, first off, he is a high-jumper, which typically gains a little less recognition from sports media than sprints and middle-distance running and Drouin’s award makes it two years in a row for Canada. The 2012 winner was Cameron Levins.

Mohammed Ahmed recorded the best ever finish by a Canadian at the IAAF World Track and Field Championships in the men’s 10,000-metres with his ninth place finish in 27:35.76 – this performance deserves a mention. >>Read the story here.>>

Shockingly, Athletics Canada’s Head coach Alex Gardiner as well as chief high performance officer Martin Goulet were both fired after 16 years on the job. It is speculated that repeated poor international performances by Canadian track and field and cross-country athletes led to their demise; certainly the proverbial camel’s back was broken by Canadians winning just one medal during the 2012 London Olympic Games. Peter Eriksson’s hiring to replace Goulet was a bit newsy however, was of little surprise to the Canadian public, therefore wasn’t that interesting of a story. >> Read the story here>>

In terms of performance, on January 13th, Vancouver’s Natasha Fraser took the Canadian record in the eight-kilometre distance at the Pioneer 8k race in Victoria, BC. Fraser shocked the finish line crowd by finishing sixth overall and surpassing the event record by 40 seconds. She finished in 25 minutes and 28 seconds. The previous record was held by Canadian Olympian Debbie Scott (Bowker), who ran 26:08 on a different, but slightly faster course in 1986. Interestingly in terms of performance, Fraser’s race is exactly equal to Carey Nelson’s course record for men of 22:58, which he ran in 1985. >>Read the story here>>

Performance of the year

The performance of the year should be Lanni Marchant’s Canadian marathon record at the 2013 Scotiabank Toronto Waterfront Marathon. After 28 years of trying, a Canadian finally broke Sylvia Ruegger’s record time. Marchant ran exactly two-hours and 28 minutes. Right behind her, by 33 seconds was Krista DuChene. Both improved on Ruegger’s time of 2:28:36. Ruegger was in the finish chute to congratulate the two athletes.

On September 21st, Marchant won the Canadian 10k title at the Oasis Zoo Run on September 21st, by finishing in the time of 34:07.2. The perpetual bride’s maid Krista DuChene was second in 34:37. On April 22nd, Marchant won the Yonge Street 10k in 31:56.5. March 30th she destroyed Hamilton, Ontario’s historic Around the Bay 30k course record, winning in the time of 1:44:39, a whopping 1 minute and 25 seconds faster than the old record. The Around the Bay 30k has been run for 119 years. There was only one blip on Marchant’s year and that was at the IAAF World Track and Field Championships marathon, where she underperformed partially due to the heat however, it is her Canadian marathon record on October 20th that seals the deal for the Canada performance of 2013. >>Read the story here.>> 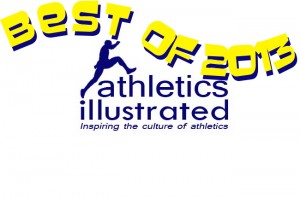 Athletics Illustrated contains over 500 interviews with athletes of all levels, who come from all corners of the planet. The most read interviews that were published in 2013 are listed below. The list needed to be cut off somewhere, so I went with 22 of the most read interviews of 2013. The next 50 could have just as easily made this list – there is a loyal readership at Athletics Illustrated – as even the lowest read interview is not far behind the first. Although the interviews listed below are the most read during 2013, there were several that could make this list that were not published during the past year, a few of them are with Rod Dixon, Jon Brown, Haile Gebreselassie, Sir Richard Branson, Lorraine Moller, Nobby Hashizume, Greg McMillan, Simon Bairu, Gary Reed, Dave Scott-Thomas, Reid Coolsaet, Cameron Levins, Diane Cummins and many others that come in a close second.

The Kate van Buskirk interview tops the charts. Although the most read interviews in the history of Athletics Illustrated as well as those that spent time previously on websites: Flotrack.org and MileSplit.ca, have been read much more. Interestingly van Buskirk’s interview is new (published November 22nd) and is likely, at its current rate of readership, to be one of the highest before the end of 2014. It is what she said that provoked a minor social media storm, and the prompting by Track and Field News as well as Let’s Run and several other running websites to feature the interview.  Read her controversial-yet well-supported complaints about Greek sororities at Duke University and personal struggles with depression.

Paula Radcliffe, John Walker and Sonia O’Sullivan’s interviews were very popular due to their legendary status among the running elite. These athletes transcend the sport and were world-beaters during their reign on the track, countryside and roads.

In doping, two articles struck a chord with readers. If we consider the interview with Hajo Seppelt – in fact there are a total of three with him and the two most read doping articles, doping could give training a run for the money as a hot-button subject. The key article is from last week. Again, too recent to be included officially in the 2013 list, however, it has had as many reads in one week as any article over the recent two years.  It is time for the IAAF and Wada to act with force and do something about doping.

Hajo Seppelt’s interview was number one for a long time. In fact, it was written in 2012, but moved to Athletics Illustrated from MileSplit.ca during 2013, as were several other top interviews. The subject of drugs is very compelling and people are interested. Hajo Seppelt is the German journalist who specialises in doping. He went to Kenya undercover as a sports agent and sought illegal performance enhancing drugs. It was partially this interview as well as his German TV and radio broadcasts that prompted the IAAF, IOC, and Wada to enter Kenya to conduct out-of-competition testing. The results of which unearthed some positive tests.

In terms of articles, opinion, op-ed, and coaching material, they out-trumped doping, which is good to know. The “Lydiard Basics” article, which is about three years old, was the most read article that was not an interview. The very recent article on Jono Fartlek was a very big hit as well. It is too new to make the list however, its rate of daily readership would make it close to number one this year and deserves a mention.  Canadians coaching well in the NCAA was a big hit and continues to get many reads.

People want to know how to train better. The Science side of athletics and endurance sports gets good readership. Two of the top read interviews are from Trent Stellingwerff, one of Canada’s top minds in sport physiology, as well as Steve Magness an America coach and Masters of Science blogger.

Canadians like their beer. The recent December interview with Geoff Harris is too new to actually make the list however, at its current rate of readership it will be on the 2014 list and perhaps the 2015 list. The first week of page views for the Geoff Harris beer interview equals a typical month of views for other interviews.

It is key to note that most of the top-read articles and interviews have been supported by Let’s Run, Track and Field News, Runner’s World, Running Times, Runner’s Web, Trackie.ca and various athlete-bloggers throughout the world. Thanks to each of them for sharing.

Athletics Illustrated is not known for video prowess however, there are a few gems. They are the 2012 and 2013 men’s and women’s Canadian Cross Country Championships videos and interviews with Cameron Levins.

Ten most read articles in 2013

Canadian Coaching successfully in the NCAA

Will Kenenisa Bekele race the marathon and how fast will he go?

Gay, Powell, and Simpson: Delusion is a symptom of vanity