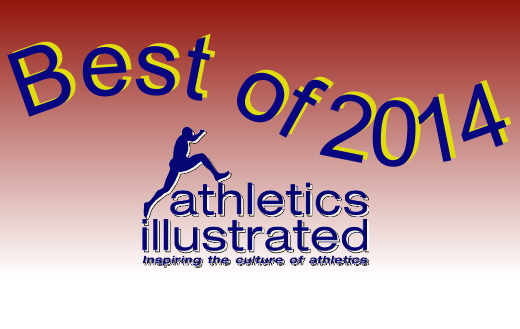 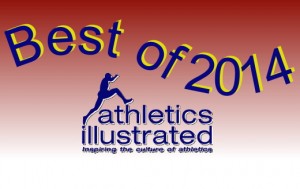 This year was newsworthy in the sport of athletics considering it was neither an Olympics nor an IAAF World Track and Field Championships (outdoors) year; two of the sport’s major showcase meets. We did, however, see global competition with the Glasgow Commonwealth Games (CWG) as well as the Sopot IAAF World Indoor Track and Field Championships. Some of the considerable stories were about apparent systematic doping taking place in Russia and widespread doping in Turkey as well as Kenya.

From Germany, ARD television and famed journalist Hajo Seppelt, once again made big news in the sport of athletics by exposing apparent systematic doping in Russia with their documentary, How Russia Makes Champions. The revelations sent shock waves around the world and throughout the sport of athletics. This sounds dire and perhaps is; however, a silver lining at the end of the day may be that the sport of athletics may get the clean-up that it requires, so that honest athletes can compete on even footing. Former Wada vice-president and founder Dick Pound will head up a commission to study the claims made by ARD. This story will carry over well into 2015.

On the roads and tracks, Canadians did well in a broad range of events during 2014, from wheelchair racing to heptathlon, from shot-put and to the 10,000m distance run. Many accomplishments happened at the 2014 Glasgow Commonwealth Games. Below is a list of the 2014 performances of the year as decided by a combination of competitive outcome, new personal standard achieved and reader engagement (site traffic) to those stories at Athletics Illustrated. There were many other performances worth noting, but these are the ones that fulfilled the three requirements; weighted proportionately most to reader interest.

Canadian Performances of the year

At the Commonwealth Games Kate Van Buskirk won bronze in the 1500m distance, she also set a personal best time during 2014, having run 4:05.38 on July 19th. Nine days before that she set a personal best in the mile distance (1609m) with her 4:28.08 performnace at the Harry Jerome Track Classic, which is one of five meets in the Canadian-only National Track League. Two months before, in Guelph, Ontario, Van Buskirk ran an 800m best of 2:02.62 at the May 31st Speed River Inferno meet.

Of the Canadian performances that stood out the most it must be mentioned that Derek Drouin’s continued record-breaking work in the high jump was one of the most impressive Canadian athletic stories of 2014. He owns the Canadian record of 2.40m and is only one of 10 men in history to clear the height of 2.40m or better. He set the record at the 2014 Drake Relays in Des Moines, Iowa that took place from April 23rd to the 27th. He then went on to achieve Commonwealth Games gold in Glasgow to cap off his best season yet. The 24-year-old also owns IAAF World Championships and Olympic Games bronze medals.

Canadian shot-put legend Dylan Armstrong has now twice been vindicated after twice being robbed of medals at past global events. Before the start of the 2013 IAAF World Track and Field Championships, he was awarded the bronze medal from the 2010 Worlds, after Belarusian Andrei Mikhnevich was stripped of his silver. Armstrong was again awarded a bronze for his efforts at the 2008 Beijing Olympic Games, as Miknevich’s performances continue to be removed from the record books. This time the ceremony took place at the 2014 Harry Jerome Track Classic in Burnaby (Vancouver), BC.

Armstrong owns a World (outdoor) Championships bronze and silver medal, World (indoors) bronze, three Commonwealth Games golds and an Olympic Games bronze. He is also the Canadian record holder in the shot-put having put the distance of 22.21m from the 2011Calgary nationals.

Ellie Greenwood won the 2014 IAU Doha World 100 kilometre championships. This was her second win, as she also accomplished the title in 2010 in Gibraltar. During 2014 she also won the prestigious Comrades Marathon in South Africa in the time of 6:18:15. She was born and raised in Scotland, however, has become a Canadian citizen and currently resides in Vancouver, BC.

Brianne Theisen-Eaton won gold in the heptathlon scoring 6597 points at the Glasgow CWG. In her two previous global championships, the 2013 World Championships that took place in Moscow and 2014 Sopot World Indoor Championships, she placed second in both. She had placed 11th in the 2012 London Olympic Games.

Jessica Zelinka took home the silver medal in Scotland with 6270 points. Zelinka is the current Canadian record holder in the event with a personal best total of 6599 points, while Theisen-Eaton is the current national indoor (pentathlon) record holder. Zelinka also competes in the 100mh at an international level. She won gold in the 2007 Rio Pan-American Games and earned a previous Commonwealth Games silver in the 2010 Delhi Games. She competed in the 2008 Beijing Olympics finishing in 5th position with 6490 points. During the 2012 London Olympic Games she finished 7th overall in both the heptathlon as well as the 100mh.

Cameron Levins, Angela Whyte and Shawnacy Barber all won bronze medals at the 2014 Glasgow Commonwealth Games in the 10,000m, 100mh and Pole Vault, respectively. Levins owns the second fastest 5,000m and 10,000m times in Canada, while Whyte is a long-time international competitor who owns three Commonwealth Games medals and is the third fastest Canadian all-time behind Perdita Felicien and Priscilla Lopes-Schliep in the 100mh. Barber, at age 20 has already set the Canadian Pole Vault record at 5.71m and finished third in the Commonwealth Games.

The most read written interview to date had 12,952 views in a single day, from the 2012 Hajo Seppelt interview, that now tops 100,000 total reads. The two most watched videos are the men’s senior race at the 2012 Canadian Cross Country Championships at over 40,000, while Adam Campbell’s 2013 Guinness World Record for running a marathon in a business suit has collected over 30,000 views.

The written articles in the style of satire, humour, opinion and interviews take the lion’s share of traffic at Athletics Illustrated. Site visitors are more apt to share via social media a satirical story or an opinion article more than any other material, written or in video.  Sorry video, the pen continues to be mightier!

Most read interviews of 2014

The most read articles were unfortunately about doping, however, one funny piece by Dick Straight about the winner of the Standard Dubai Marathon, Ethiopian Tsegaye Mekonnen Asefa, supposedly being under 18 years of age was well read. The satirical piece claimed Asefa was only 12 and that when he was a five year old, he trained with Haile Gebrselassie.

Ten most read articles in 2014

The retirement announcement of Regina, Saskatchewan’s Simon Bairu from the sport was something that no one in the Canadian running community wanted to hear just yet. Bairu is the Canadian record holder in the 10,000m distance with his 27:23.63 performance from the 2011 Payton Jordan Invitational. He also won seven Canadian Cross Country Championships. He had an excellent run in the 2011 IAAF World Cross Country Championships managing a 12th-place finish. Bairu won consecutive NCAA Cross Country titles for the University of Wisconsin. He retired early (age: 30) as he had trouble staying away from injury issues.

She is a five-time Commonwealth Games competitor and won two bronze, one silver and one gold medal in the games, she also had one fifth-place finish. She owns a Pan-American Games gold medal. Cummins competed five times in the IAAF World Track and Field Championships, one of the five was an indoors edition. She finished as high as fifth in the worlds during the 2001 Edmonton meet.

Connaughton retires as a two-time Olympian as he competed in the 2008 Beijing and 2012 London Olympics. He is a three-time World Championships team member from 2007, 2009 and 2011. Connoughton made the finals of the Commonwealth Games in Delhi 2010 and is a Pan-American Games silver medallist from 2007. He is ranked fourth all-time in Canada in the 200m with a personal best time of 20.30. His personal best over the 100m is 10.15.

2015 will be likely be a very newsworthy year as the doping allegations and other improprieties such as bribery and cover-up continue to be investigated and continue to unfold, as we discover the depth of some of these issues.

Athletically-speaking 2015 will be exciting as athletes begin to focus on the 2016 Rio Olympic Games (with long-term plans) and the 2015 IAAF World Track and Field Championships. Stay tuned as Athletics Illustrated continues to cover a higher degree of international stories, while continuing to tell some of the Canadian stories and continue the popular written, general interviews with the top names in the sport of Athletics. Thank you to the hundreds of thousands of website visitors throughout the year of 2014, visit often. Share, follow and keep up with A.I. on all the different social media fronts.