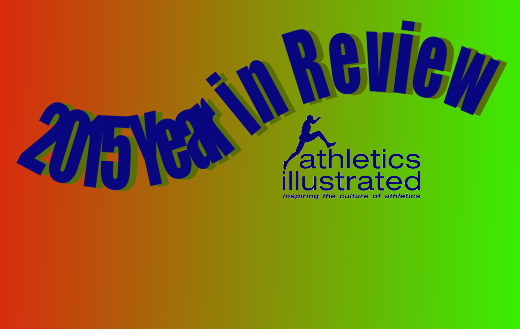 This year was newsworthy in the sport of athletics mostly for drug related stories centred around apparent systematic doping in Russia, corruption within the International Association of Athletics Federations (IAAF) and the World Anti-Doping Agency’s (WADA) Independent Commission report. Part two of the two-part report is yet to be released; no doubt the anticipated “jaw-dropping” report will make the top-read list in the 2016 year in review.

The most read posts during the year inform what is chosen to be published at Athletics Illustrated.

Monthly visitors, the percent of overall traffic and percent up or down over 2014. Interesting the US tops Canada by a small margin, even though approximately 60% of the content is about Canadians, Canada or Athletics Canada.

“From Germany, ARD television and famed journalist Hajo Seppelt, once again made big news in the sport of athletics by exposing apparent systematic doping in Russia with their documentary, How Russia Makes Champions. The revelations sent shock waves around the world and throughout the sport of athletics. This sounds dire and perhaps is; however, a silver lining at the end of the day may be that the sport of athletics may get the clean-up that it requires, so that honest athletes can compete on even footing. Former WADA President and founder Dick Pound will head up a commission to study the claims made by ARD. This story will carry over well into 2015.”

We continue to see the fallout from this today and will through to 2016 and years to come, no doubt.

Most popular interviews during 2015:

Jon Brown-Part 1, Roger Robinson, Ron Clarke, Haile Gebrselassie, Mo Farah, Sir John Walker, Sir Richard Branson, Keith Livingstone as well as the strange and wonderful series of eight interviews with multiple personalities called Fartlek and Low Things in West Auckland, which made a bit of a comeback in activity during 2015.

The most read written interview to date had 12,952 views in a single day, from the 2012 Hajo Seppelt interview, the first of three that now tops 150,000 total reads. The two most watched videos are the men’s senior race at the 2012 Canadian Cross Country Championships at over 46,000, while Adam Campbell’s 2013 Guinness World Record for running a marathon in a business suit has collected over 31,000 views.

Several racewalking interviews and articles nearly made the list. There appears to be a growth in interest in this event, perhaps we will see more of that for the 2016 list.

The written articles in the style of satire, humour, opinion and interviews take the lion’s share of traffic at Athletics Illustrated. Site visitors are more apt to share via social media a satirical story or an opinion article more than any other material, written or in video.  Sorry video, the pen continues to be mightier!

The interviews and articles below are in order of most read per month on average since they have been published. This is done as for example, a January 15th article or interview will have more reads than a November 15th just due to time since posted.

Some of the interviews and articles had an advantage when linked by other popular websites like Let’s Run, Runner’s World, Track and Field News, Running Times, Runner’s Web, FloTrack and several others.

Most read interviews of 2015

The most read article was unfortunately about doping, however, there were a few well-read articles about the sport such as a hotly debated comparison between Rod Dixon and Steve Prefontaine, as well as a piece on the demise of Running Times Magazine. The Far Reaching Effects of Corruption in athletics was intensely read for a few days. There seemed to be some sharing amongst the athletes who were directly affected by doping. Of the other articles that could have made this list, there were about 20 on doping and about 20 published in other years, that were well read and shared – but again, I had to cut-off the list somewhere.

Ten most read articles during 2015 that were published before 2015:

Cross Country Running Should be Included in the Pyeongchang Olympics – Opinion
Beer Mile Controversy – Humour
Doping: It is Time Now for the IAAF to Act with Force – Editorial
Canada’s Fastest 5K: Will we Ever Know? – Opinion
Turkey Soup: 31 Turkish Athletes Suspended – Editorial
Gay Powell and Simpson: Delusion a Symptom of Vanity? – Opinion
The Power of the Foot – Fitness
Cross Country Respect: Where is it? – Humour/Opinion
Tirunesh Dibaba: Where is the Recognition? – Opinion
Doping in Sport: India Sets an Example – Editorial