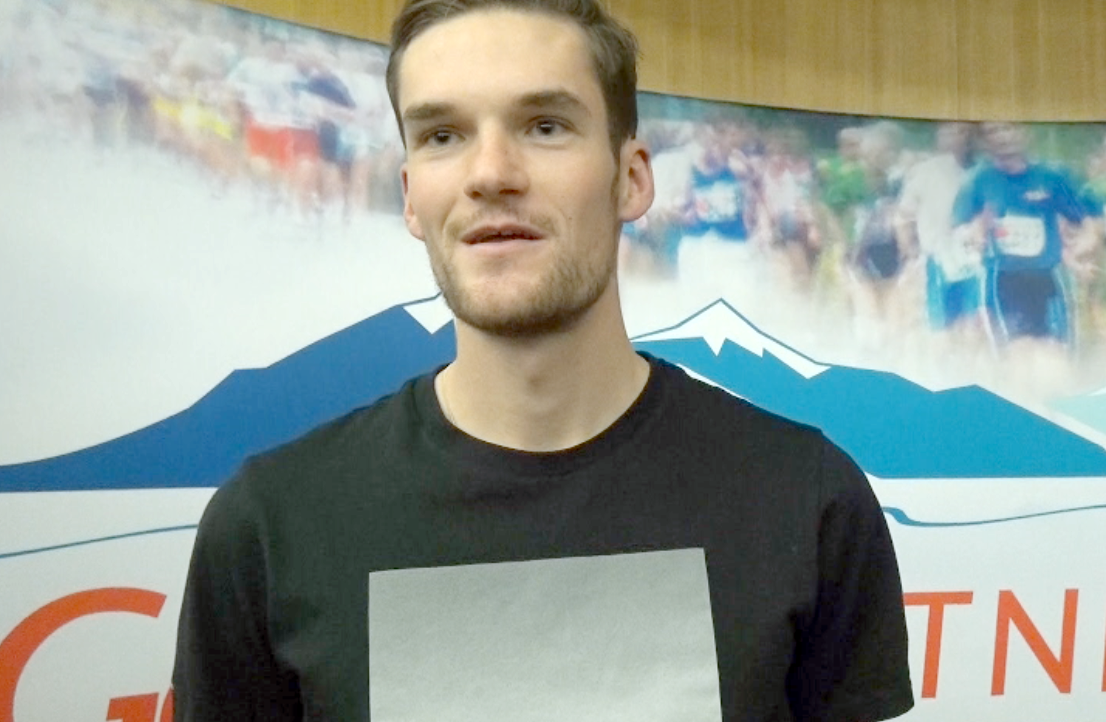 It’s a good life if you can lead it, like Calgary’s Trevor Hofbauer and Vancouver’s Natasha Wodak do. The former is the defending Canadian marathon and half-marathon champion, while Wodak owns two national distance records and competed in the 2016 Rio Olympics. The two toed-the-line during the 2018 GoodLife Fitness Victoria Half Marathon Sunday and lived up to their billing as favourites by winning.

“I was coming here to get in a good race before Monterey Bay Half Marathon in November,” said Hofbauer. “But I wanted to run well and get in a great workout. Ultimately I wanted to go under 66-minutes. That’s where my focus was. I got it done, so now I can move on.”

In so doing, he ran his second fastest half-marathon all-time, despite running 300m off course. His personal best is one-hour, four-minutes and 30 seconds. Sunday, he finished in the time of 65:18.

Wodak who owns the national 10,000-metre record of 31:41.59 and the 8K road record, which she set in Victoria at 25:28, entered the race hoping to better the (her own) GoodLife Fitness Victoria Half Marathon record of 1:14:31. She accomplished it finishing in the time of 1:11:45. She finished behind only eight men and 25 seconds outside of her own personal best.

“My A-goal was to run around 1:11 and my B-goal was to go under the course record, which I own at 1:14, somewhere in there. I hit a really good rhythm and ended up with a negative split, so I am really happy with that. I am also doing the Monterey Bay Half Marathon and looking forward to pacing Kinsey Middleton to half-way in the Toronto Marathon on October 21.”

Asked if she will go after fellow Vancouverite Rachel Cliff’s national record of 1:10:08, she said, “Not at Monterey Bay, but maybe sometime next year.”

The second woman across the line was Robyn Mildren of Vancouver. She finished in the time of 1:15:00, 31 seconds in front of fellow Vancouver athlete Meg Lewis-Schneider.

Bowerman Track Club athlete Jared Carson finished second in the men’s race behind Hofbauer in the time of 66:39 – a new personal best.  He is originally from Atlanta, GA and also lived in Austin, TX. Asked about training and racing in the cooler Portland area he said, “It’s nice. There are seasons up here. We had a nice summer and I enjoy a bit of rain. Atlanta has two seasons, hot and hotter.”

Carson was followed in by Julian Florez of Albuquerque, NM. He made the trip with several area training partners as well as his girlfriend Nicole Roberts who finished third in the 8K race. Florez stopped the clock at 1:07:20.

“It’s definately a great course. We love coming up here and the undulating hills was something different for us. I am now going to get ready to run the California International Marathon and try to hit the US Olympic Trials standard of 2:19,” said Florez.

In the 8K race Vancouver’s Justin Kent said that he was looking for a new personal best in the event and to run mid-23. He finished first in the time of 23:43. He was followed in by Joshua Potvin of Vancouver in the time of 24:59 and Victoria’s Nick Walker who crossed the line in 25:45.

Four-time champion Lindsay Carson now living in Greater Vancouver finally had her streak of wins broken by training partner Sarah Inglis. The two athletes share the same coach in Mark Bomba. They finished in the time of 27:27 and 27:32 respectively.

“She pulled away at 3K,” said Carson. “I started to gain ground on her near the end, but couldn’t quite do it.”

Asked how the race meshed with her expectations Inglis said, “It exceeded them. Lindsay is super fit, we train together and I came in thinking if I can hang onto her I would be really happy. I never expected to beat her. Mind you, I know she was catching me in the end. It is a fun race and it was nice to run together.”

Inglis is a Scottish athlete who attended Trinity Western University in Langley. She was coached by Bomba at the school and has continued on with him. Last year she won the Scottish 10-mile championships.

Nicole Roberts nabbed third with a 28:01 finish time. She will be looking to make the Olympic team for Great Britain in the 3,000-metre steeplechase. Currently, however, she is living in Albuquerque, NM.

As for the race, we were together until 3K, then we split up – the performance was about what I expected. It’s a beautiful course. We came last year and found it to be a fun event, we had a good time.”

SHOESTRINGS: Also in the half-marathon was 2016 Rio Olympian Evan Dunfee, Canada’s all-time greatest racewalker, specializing in the 50K distance. He is walking 25K per day for 25 days in support of the 25th anniversary of KidSport. More information can be found at www.dunfeewalks.com.
Of note was Sadie Sigfstead of Edmonton, AB. The Edmonton Harrier moved out to Victoria and is attending Mt. Doug Secondary. At age 15, she finished in the time of 28:35 for 15th overall and a new event 13-15 age-group record. 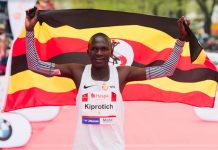 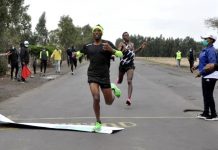 Elias Kiptum, assisted by European media, accused of colluding to spread propaganda of doping in Kenya