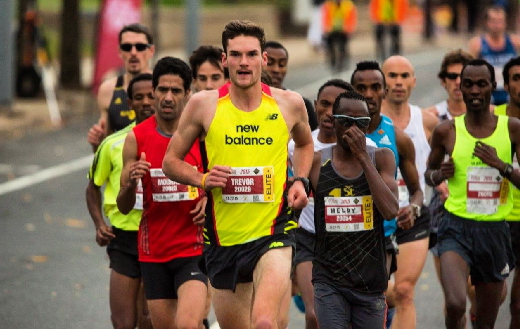 Trevor Hofbauer of Calgary is currently one of Canada’s fastest half-marathon runners, having raced the Philadelphia Half Marathon in the time of 64:28, which is nearly a three minute personal best.

Being an Olympic year, Hofbauer is seeking the Canadian Olympic standard in the 10,000-metre distance. Although globally the 10,000-metre distance may not have the depth that it did in the recent past when the likes of Ethiopians Haile Gebrselassie and Kenenisa Bekele were running well under 27-minutes, Hofbauer still faces his challenges in making the Olympic team. In front of him are two of Canada’s all-time fastest at the distance, Olympians Mo Ahmed with his best of 27:34.64 and Cameron Levins who owns the national record of 27:07.51. Canada can send three qualified athletes to the Rio Olympics in each event.

Hofbauer will need to run at least as fast as 28:00 at or before the Canadian 10,000-metre championships that are taking place on June 26 in Guelph, Ontario, as well as finish top-three in the event.

Christopher Kelsall: You grew up in Calgary, a pretty active city. Which sports did you play as a kid?

Trevor Hofbauer: For the most part, yes. I was born in Burnaby, BC, lived in Port Moody for the first 11 years of my life before moving to Calgary. Growing up, my main sport was basketball. I played with the Junior Grizzlies in Vancouver and then played on several community, club and school teams once we moved to Calgary. Throughout elementary, junior high, and high school, I tried out several sports like baseball, soccer, volleyball, cross-country and track, swimming, but never took them seriously. Basketball was my life until age 19.

CK: What positions did you play?

TH: Primarily shooting guard and small forward. I was typically taller than most, but I had no mass, so the post never worked out too well and I didn’t have the ball handling abilities of a point guard. Plus, attempting dunks as a dynamic guard was a blast.

CK: You could dunk? What was your points-per-game average?

TH: I could, just the basic putting the ball in the hoop kind of dunk, nothing flashy. In my senior year at high school, my PPG was around 14. In community ball, it was 20-plus.

CK: If someone was to describe your style as a basketball player, who would they say you modelled your game after?

TH: Probably Andre Kirilenko as our body structure is very similar (tall and lanky). I grew up a Vince Carter fan, so I tried to mold my game like his.

CK: At what age did you begin to get serious about running, was there a turning point?

TH: Around age 19 or 20. At that time, I went back to school and joined the cross-country/track team. My college coach did a good job of lighting the fire inside, making it easy to believe in myself. Running was fun, it allowed me to relax after a long day at school or work, it allowed me to focus on my studies, and running took priority over going out to the clubs. In a way, my collegiate years were very dull, but those initial years are paying off now.

CK: Was that when you went to SAIT?

TH: Yup, my coach and I joined forces at SAIT. It’s funny, as a runner, you think the top university schools and colleges will have the best coaches; I went to a technical institute and joined up with the best coach a runner could ask for.

CK: What happened in the Philadelphia Half Marathon that worked so well for you?

TH: Honestly, I just went for a run. My training cycle before-hand was flawless and I had a ton of motivation leading up to the race. Every morning, my alarm clock was titled “World Half Champs” and during every run, I ran the number 64 through my head. Those were my two goals and all of my focus was on them. Mindset is the key, no matter how tough training can be. It’s all about the big picture.

CK: Visualization. That is one of the key mental aspects of achievement isn’t it? Believe, positive self-talk, to visualize the accomplishment. What achievements are you visualizing now?

TH: For sure, visualization, positive self-talk and believing in one’s self are all components to success; especially when times are the toughest. I have a few achievements in mind, but for the time being, I want to enjoy the sport and push my body beyond its apparent limits. From there, we’ll see what happens.

CK: When you say, “training cycle”, how long is it and can you give a general description of your training?

TH: My training cycle is usually around 12 weeks. Before the cycle begins, I’ll get in about two weeks of easy mileage and get into the gym as much as possible. From there, the time in the gym decreases while the mileage increases. I really value recovery, so my mileage isn’t as significant as others, but doing workouts in Calgary is a real butt kicker.

CK: During 2013 it appeared that you were interested in running a marathon and there was mention of Victoria. Did you change your mind? Will you look at the distance again?

TH: It’s true. I had my registration confirmed and everything. At the time, I put on a solidarity event in support of those affected by the Boston bombings called Run for Boston. I met every runner in Calgary and really made a name for myself. I had a lot of people ask me if I was going to run a marathon, so I decided to take on the challenge, but my legs couldn’t handle the mileage at that time and I was forced to drop down to the half. The plan right now is to run a marathon in 2018. No location determined as of yet.

CK: Will you be looking for opportunities to race 10,000m this spring before the trials take place? Which meets are you considering?

TH: Being an Olympic year and my first time running the distance, my chances of getting into a high caliber 10,000m in the states is slim, so unfortunately no. My approach is going to be rather unorthodox. I’ll run two solo 10,000m trials in Calgary (two months out and one month out) to get a feel for the race, then let things roll in Guelph at the end of June.