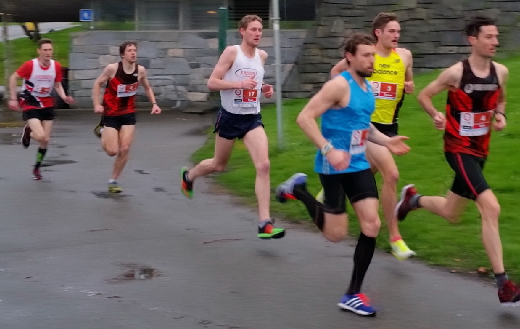 “I had no expectations. This race was used as a workout leading up to the Sun Run. Getting a finishing time is always the only expectation,” shared Hofbauer, when asked of his expectations going into the race.

The NACAC 10K took place in San Juan, Puerto Rico, in that race he helped Team Canada win the inaugural event. Hofbauer finished in the time of 30:20, good for third in the NACAC field and 15th overall. The race was run as part of the World’s Best 10K and teams are based on male and female competitors from each country. Hofbauer was partnered with Lanni Marchant who won the women’s race in the time of 32:15.

“Before the (Modo)  race, I knew we had a competitive group of guys with Rob, Kevin (Friesen), Terence (Attema), Kevin (Coffey) and Ryan (Brockerville), and that was the lead group after 1K,” said the 24 year-old. “From there, Rob, Kevin (Friesen), and myself pulled away until about the 6K mark where I pulled away a bit more. From there, I just hoped to keep the gap the way it was and finish strong.”

“I was happy with the race – felt very strong and can’t complain with a pb either,” said Cliff.

Asked how the race unfolded, she said, “The race played out pretty uneventful, there was a large group of us through about 2K and then Bruce (Deacon)and Craig (Odermatt) and I split off from the pack and went ahead. It was a little windy so the three of us shared leads throughout. I felt pretty even and smooth through the race and was happy to come home with the win!”

The top three master men were Craig Odermatt of Victoria, who finished seventh overall in the time of 26:41.Vancouver’s Kevin O’Connor finished second in 27:00, while the third place 40-plus master was Bruce Deacon, five seconds back. The three compete in the 45-49 age-category. “It’s not always about the time so yes to beat two stars I am proud of my mental toughness out there to outduel them when the going got tough,” said Odermatt.

Melanie Kassel finished in 31:13 to take the lead master women’s time. Sarah Massie crossed the line in 31:47, while Claudia Edwards finished third in the time of 32:53.

Kelly Wiebe and Lanni Marchant were the defending champions from 2015. They finished in 23:42 and 26:43, respectively.

The Modo 8K is the first race of the eight event Canada Run Series, which includes road races that take place in Vancouver, Toronto and Montreal.