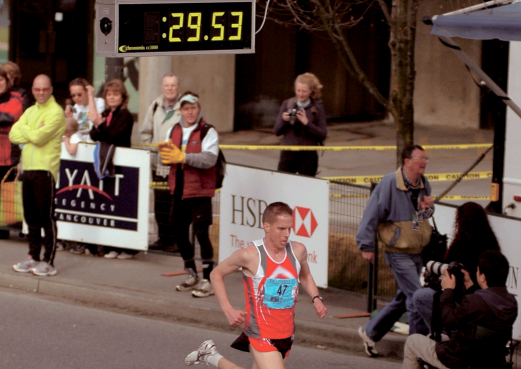 Trinity Western University Spartans Coach Mark Bomba has been recognised by Athletics Canada as the Development Coach of the Year, with the Jane and Gerry Swan Development Award.

Bomba told Athletics Illustrated, “It’s pretty cool to get an award that’s named after the two people, in Gerry and Jane, who greatly impacted me as a younger athlete. Neither ever coached me, but both were heavily involved in running the Valley Royals (track and field club) and provided me with the support to compete.”

Under Bomba, the Spartans teams made dramatic improvements. The women’s cross-country team moved from 13th place out of 17 teams during the 2012 Canadian Interuniversity Sport (CIS) championships, to second. They won the Western Conference championships three consecutive years, while the men’s team finished second in 2015, they finished 14th in 2012 out of 18 teams. The men’s team went on to finish second at the CIS track and field championships this year.

Bomba continues to coach former Spartan Fiona Benson, who turned heads across Canada with a breakout season over the 800-metre and 1500-metre distances last year. She improved her 800-metre best from 2:07 to 2:01.58; a monstrous performance drop, then continued to run faster over several meets until she became just the fifth Canadian all-time to run under the two-minute benchmark, which she accomplished in Portland in June with her 1:59.94 performance.

She went on to win a track meet in Roverto, Italy, the Unione Sportiva Quercia meet 1500-metre event. She finished in the time of 4:05.62 setting a new personal best and a faster performance than the Rio Olympic qualification standard of 4:06.00 (since eased to 4:07).

Benson went on to compete in the 800m event during the 2015 IAAF World Track and Field Championships that took place in Beijing, China.

During the fall of 2015, another Bomba-coached athlete Scotland’s Sarah Inglis won the CIS national cross country championships with her brazen and aggressive front running style, she led early as she did weeks earlier winning the BC Cross Country Championships in Nanaimo.

She employed the same tactics during the national track and field championships against Canada’s fastest 1500m women; an event Canada is deep in. She told Athletics Illustrated at the time, “I only realised after looking up to the big screen (how far she was ahead) on the first home straight. I was then committed so thought bugger it, let’s see what I can do!”

She finished sixth in a deep field.

Bomba has also had an impact on Declan White, who finished the 2015 Vancouver Sun Run in the time of 29:58, while he owns track bests of *14:07.58 over 5,000m and 8:05.94 for 3,000m indoors. White finished second at the 2015 BC Cross Country Championships held in Nanaimo’s Beban Park, narrowly being outsprinted by former UBC Thunderbird Luc Bruchet.

Bomba will be honoured in Edmonton on July 6th during the Canadian track and field championships and selection trials for the Olympic and Paralympic Games.

“Along with the people, like Mike Lonergan and Marek Jedrzejek and others who directly coached me, they all gave me an opportunity to learn about the sport,” said the former distance runner.” Without them, I wouldn’t exist in any format and the fact I get to (hopefully) impact others like they did with me, is both an honour and huge responsibility. If I can do a 1/10th as good of a job as they did in impacting athletes then I can say it was worth it.”

Athletics Canada’s Awards Committee selects winners from the nominee pool put forward by the athletics community. 2015 Athletics Canada annual award recipients will be honoured July 6 in Edmonton during the Canadian Track and Field Championships and Selection Trials for the Olympic and Paralympic Games. Details on the event will be released in the coming weeks. – See more at: http://athletics.ca/athletics-canada-announces-2015-annual-award-winners/#sthash.NqDyBOMZ.dpuf

*According to the latest online results available.