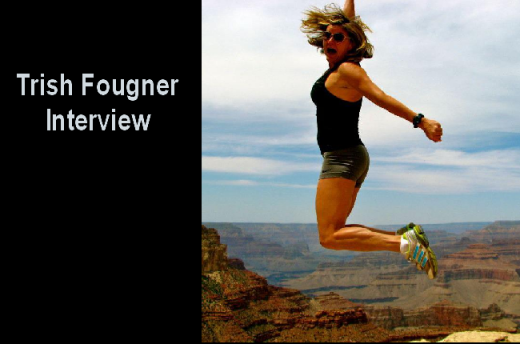 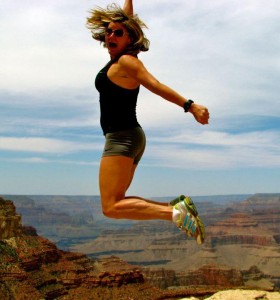 Trish Fougner (Wellmann) is a former University of Victoria Vike team member who specialised primarily in the 800-metre distance. She competed for the Vikes from 1982 to 1989, (she took a year off to recover from injury during the 1986 season).

Her CIS (formerly CIAU) record for the 4 x 800m relay remains in-tact, her teammates were Robyn Meagher, Silverado Socrates, and Tania Jones. Also, her 1000m indoor Canada West record – and second fastest in all of Canada – is still on the books. She was named high performer of the meet at the Canada West championships in 1988 where she ran a 2:45.10 1000m, finishing nearly 11 full seconds ahead of the second-place finisher. Fougner was also part of the CIS cross-country championship team in the years of 1985 and 1987; that 1987 team set the standard for the lowest possible score, which remains today.

Fougner now owns Foggygirl Consulting, a company that provides professional marketing and communications services. She possesses over twenty years of experience in the public relations, communication, and marketing field. She is currently tasked with helping the Victoria Track Classic in celebrating its 25th anniversary.

Christopher Kelsall: You competed in the Victoria International Track Classic during the early years of its existence. What was the atmosphere like in Centennial Stadium 25 years ago?

Trish Fougner: Well, way back when I was a wee little girl….(laughing)  1988 was the highlight of my running career and it was also the first year for the Victoria International Track Classic. It was also the year Brian Barnes, U.S. Olympic shot putter and U.S. high jumper Dwight Stones competed in the event. I had just come off winning the 800m at the Harry Jerome Track Classic, just missing the Olympic qualifying mark by four-tenths of a second. I was determined to do it on my home track. There was a lot of pressure. We probably had about four thousand spectators and it was one of those rare nights on the track where the weather was calm. I ended up running less than expected but nevertheless, the spectators were incredible and the atmosphere was electric.

CK: Were you competing for the University of Victoria Vikes when you raced the VITC? 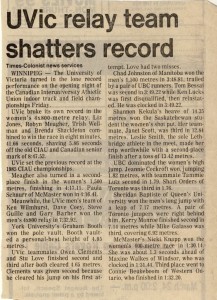 TF: Yup. I was a Vike, back then we were called Vikettes, but that changed because both men and women had to be gender-neutral. I liked when we were called Vikings, that’s essentially where Vikes came from. In 1988, I was in my fourth year at UVic, but didn’t graduate until the following year. I had come off a very successful indoor season with my teammates and I was running the fastest 4 x 800 metre race indoors. That record still stands today. I also came second in the 1,000 metres at the CIS Championships finishing in 2:44. I still hold the Canada West 1000m indoors record. I have very fond memories of racing and fun times during my UVic days. I continued for a few more years after graduating but then retired due to many injuries.

CK: Who were some of your main competitors during the early 1980s?

TF: The depth in the women’s 800m in the early to late 80s was incredible. The top ten in Canada ranged from 2:00 – 2:02. Brit McRoberts was one of the top runners and was ever so close to breaking that 2:00 mark. A few of us in the late 80’s were close to breaking the 2:00 mark. In 1988 it was Mary Burzminski from Edmonton, Renee Belanger from Quebec, and Camille Cato from Toronto and myself that were at the top of the 800m ranks and battling for a position on the Olympic team. It’s really very exciting to see that there is depth again in the women’s 800m with many women dipping under 2:00 now. It’s such an elusive barrier to break for many, but once a few do this it becomes the norm and I believe that’s where we are at now in this event.

CK: Your role today is much different. Are you essentially in charge of marketing?

TF: Yes. I’m basically looking to get bums in seats. I want to see five thousand spectators at this year’s event and I want to bring back the excitement of our earlier days. We are celebrating 25 years this year and that’s many years where we have hosted some incredible athletes and watched some very intense races. To be able to see not only Canada’s top athletes in action but to watch them compete against some of the best in the world is a treat. Every schoolchild should come and watch. It’ll get them so motivated to get involved in track after watching these races.