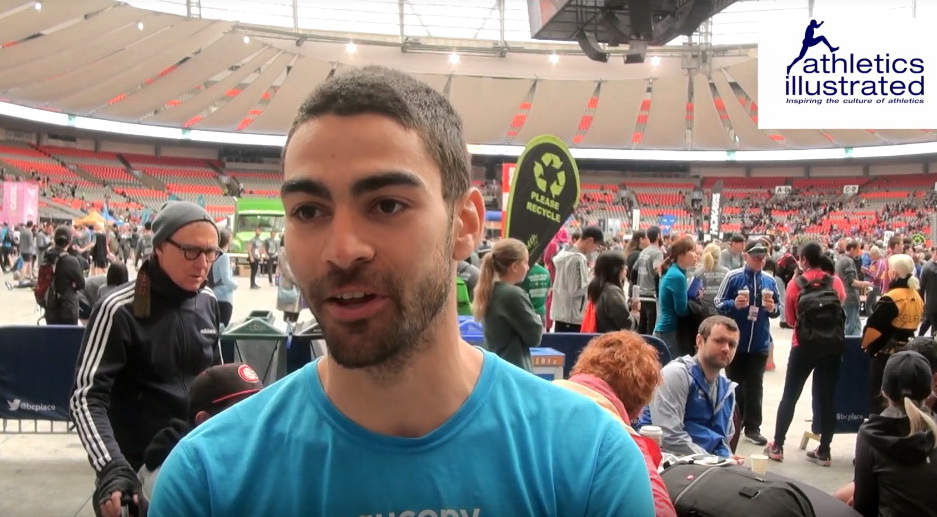 With files from Victoria Sports News.

During this Sunday’s 30th annual TC10K on the streets of Victoria, BC, Calgary’s Matthew Travaglini and Kenya’s Haron Sirma will likely lead the race and have a competitive finish. The two will lead approximately 10,000 runners and walkers and a few other competitive athletes to the line including two-time winner Daniel Kipkoech, Paul Kimugul both of Kenya as well as Canadians, Keenan Viney, Ben Weir, and Andrew Russell.

Kersh, at publication time, does not appear to be registered.

On Sunday, April 14th, the 26-year-old Travaglini finished fourth in the 35th annual Vancouver Sun Run. Two of the three athletes who finished ahead of him are not racing the TC10K. Training partner Trevor Hofbauer will be racing the Hamburg Marathon the following week, so he is out. Hofbauer finished second in the Sun Run credited with the same time as the winner Justin Kent of Vancouver, who is now going to focus on his track season. Only Sirma will be racing the TC10K of the athletes who beat Travaglini two Sunday’s ago.

In Vancouver, Sirma rolled across the line in 29:32. It was a close race. Travaglini finished three seconds back in 29:35.

“Yes, Trevor [Hofbauer] has the marathon coming up. I want to get into the Portland track meet in a few weeks, but the next race I am looking forward to is the TC10K in Victoria,” said Travaglini. “It’s a beautiful course in a beautiful city, it’s really nice on the island.”

Kipkoech won the TC10K back-to-back in 2016 and 2017, then Sirma won in 2018. The last time a Canadian won was when Vancouver resident Kelly Wiebe, who is originally from Regina, Sask won in 2015 with the third-fastest ever TC10K performance at 29:08 – and fastest on the course through to 2018. The event record (on a different course) is 28:47 by Kenyan Simon Chemwoiya from 1995. The course is altered slightly for 2019 due to road construction.

Also in the mix is former UVic Vike Matt Noseworthy and former triathlete, Andrew Russell. Noseworthy didn’t have the race he was expecting in Vancouver finishing 34th overall in the time of 32:40, he was looking to run under 32-minutes.

The two battled each other during the eight-race Vancouver Island Race Series with Russell taking their final head-to-head meeting at the Sooke 10K in 32:03 to take first and Noseworthy took second in 32:23. Both will be looking for better performances Sunday.

It’s anyone’s call who will win Sunday between Travaglini and Sirma, but it should be an exciting race with the two finishing right around 30:00.

Kipkoech cannot be counted out, however, he was beaten by Travaglini in Vancouver.

There may be a new event record in the women’s race.

The record is 32:56. The time was accomplished two years ago by Polish runner Karolina Jarzynska-Nadolska, who won the Vancouver Sun Run that year in the time of 32:39, one week prior.

Two weeks ago, the 2019 Sun Run was won in the time of 32:38 by Vancouver’s Natasha Wodak. It was her third win. She won’t be running in Victoria on Sunday, as she will be in Los Angeles taking in the Payton Jordan Invitational at the Stanford University track. She will be looking to better the 2019 IAAF World Track and Field Championships 10,000-metre qualifying benchmark of sub-31:50.

“I run every race hard,” said Wodak. “I am going to race as best as I can and perhaps a new Canadian record will happen, but I do want to get under the world’s standard of 31:50 for sure.”

Worlds will be taking place in Doha, Qatar starting September 27.

Meanwhile, Sarah Inglis, who is the Scottish 10-mile champion, is declared very fit and ready to take on Jarzynska-Nadolska’s record from 2017.

“I’m looking to keep the pace honest and race the girls who are there,” said Inglis. “I love competing in Victoria, so it will be a fun weekend!”

Inglis has raced in Victoria on two separate occasions. In 2017, she won the GoodLife Fitness Victoria Half Marathon in 1:14:20 finishing 11th overall and then in 2018, won the 8K as part of the same weekend event. With the win, she unseated Lindsay Carson as four-time defending champion. The two are now training partners in Langley and both will be racing on Sunday.

On March 17, she dropped a few jaws by winning the St. Patrick’s Day 5K in Stanley Park in a new Canadian all-comers record of 15:29. Her coach Mark Bomba thinks that race was “just the beginning,” – some foreshadowing.

Her road best is 33:44 from Sept. 2017. Apparently, the unsponsored Langley Mustangs Endurance Group runner will be chasing the course record and a big new personal best time.

Inglis won’t be alone as Vancouver’s Dayna Pidhoresky is the two-time defending champion. She won last year in 33:20 and the year before in 33:42, unseating four-time winner Jane Murage of Kenya, who will not be racing this year.

On April 14th Pidhoresky finished fourth in the Sun Run in the time of 33:28, after finishing the Around the Bay 30K on March 31 in second place, which was followed by the Spring Run-Off 8K in Toronto the following Sunday, where she finished fourth and in the time of 27:29. She is the only woman to win the ATB 30K four times – the oldest distance race in North America.

Malindi Elmore of Kelowna is also be racing and she should make it at least a three-woman race. Carson, with her four-consecutive wins cannot be counted out.

There should be a very interesting finish between the top three or four athletes. They could be together to the end, this will depend on a potential headwind between 5K and 8K and how fast the women take the race out.

Elmore is a former international 1500m/5,000-metre runner for Canada. For a while she switched to Ironman training, however, is happy to compete just in distance road running now. The 39-year-old mother of two boys under age five finished third at the Sun Run in 32:59. She won the event in 2010 in 33:06.