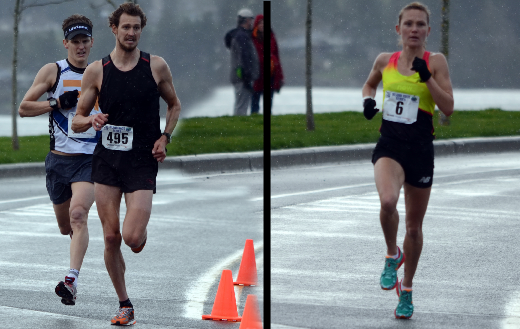 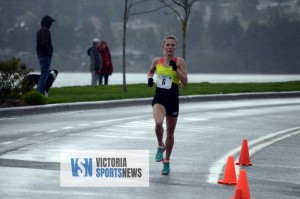 Victoria’s Hilary Stellingwerff, 2012 London Olympian and Toronto’s Kate Van Buskirk, bronze medallist from the 2014 Glasgow Commonwealth Games took to the streets today to race the Bazan Bay 5K. The two 1500-metre specialists battled the elements more than each other as they faced blustery and rainy conditions.

“I put forth a hard effort today so I’m happy to get a good stimulus and a win, but disappointed the conditions weren’t conducive to faster times…although it was the same for everyone out there and you just have to commit to racing hard.,” shared Stellingwerff. 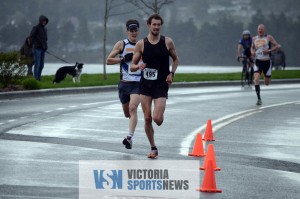 The second place finisher was Emily Setlack of Cold Lake, Alberta, she crossed the line in 17:00.

The top three men were triathletes Matt Sharpe, Brent McMahon and Adam O’Meara, who  finished in 15:18, 15:20 and 15:28, respectively. The fourth place finisher was world renowned beer mile champion Jim Finlayson, who has gone as fast as 5:01 as the world’s fastest supermaster beer miler. He once held the open-category world record at 5:09. Finlayson was competing in the 40-44 age-group, while Craig Odermatt finished second master, but in the 45-49 age-group while the third place master was Campbell River’s Mark Cryderman.

The top three master women were Marilyn Arsenault (45-59), who crossed the line in 17:29. Shawnigan Lake’s Nancy Baxendale was the second master. She finished in the time of 19:21. Baxendale competed in the 55-59 age-category. Susan Gordon of Salt Spring Island finished third in 20:29 and second to Baxendale as a 55-59 age-group runner. 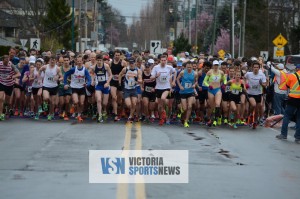 The race saw over 600 registrations with 552 finishers. The age range of the runners was from as young as six-years-old to 90.

Bazan Bay 5K was the fifth race of Vancouver Island Race Series the next two events are the Comox Valley Half Marathon and the season finale, the Sooke River 10K.