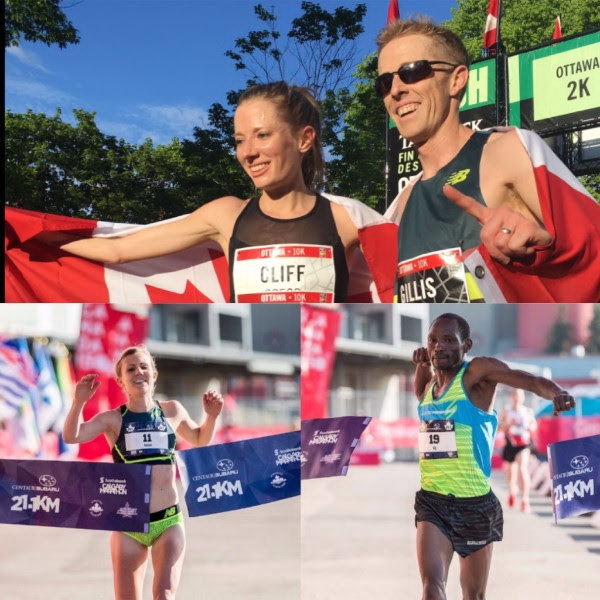 For the Ottawa 10K Championships, the field is a who’s who of Canadian running with a generous volume of international competitors.

Meanwhile, in Calgary, there will be a selection of top Canadians going after the national half-marathon championships, see below.

Both Calgary and Ottawa can heat up on short notice in May, so temperatures can be a factor.

Sunday, the overnight low is a temperate 12C in Calgary. The race starts at 7:00 am, so the temperatures likely won’t be a factor, however, the mercury is expected to rise to 27 by mid-day. Calgary’s air is typically very dry and resides at 1,045-metres above sea level and is considered to be at semi-elevation.

Ottawa 10K will be warmer as it will be run in the early evening at 6:30 pm. The temperature should be a minor factor for some at 21C. Ottawa typically offers higher humidity. The city sits at 70m above sea level, so is ideal for elevation.

Spirit animal: A bee. Always on the go, organized, and productive. Ironically, I am allergic to bees.

Runner bio: I am a British athlete now living in Edmonton, Alberta. We moved from near London in 2016 to allow my husband to start a new job. I am returning to competitive running after giving birth to my son a year ago and am very much looking forward to my first experience of the Calgary Marathon weekend. This will be only my second Canadian road race.cc

Runner bio: Michael Nishiyama is from Edmonton and runs for the Running Room Athletic Club. He has raced competitively for 16 years, is a Queen’s University alumni, and currently works as a Civil Engineer. He recently got married to his incredible wife Alecia Kallos, who is also partaking in the elite field for the 10K.

Dayna Pidhoresky (31) from Vancouver BC

Spirit animal: Dog – they live in the moment, are always happy, loyal and love life.

Runner bio: Sasha Gollish is a Toronto resident most known for her bronze medal performance at the Pan Am Games in 2015, where she won a bronze medal despite losing a shoe! More recently Sasha was the U Sport Cross-Country Champion, leading the Toronto Varsity Blues to their first banner (Team win) since 2002. Gollish was named the female athlete of the meet for her endeavours. In 2016 Sasha was also the National Cross-Country Champion, winning the first ever 10k distance, going on to lead Team Canada at the World Cross-Country Championships in Uganda. Sasha also contests the roads, mainly the half marathon. She had the fastest female Canadian time in 2016, 1:11:07, placing her 2nd on the all-time ranking list. Off the track, Sasha is a practicing engineer and a PhD Candidate at the University of Toronto’s in Engineering Education (part of the Civil Engineering Department).

Runner bio: RUN WALKER!! 2016 Olympian, former triathlete and runner, CPA at Deloitte Calgary. I am moving to Canmore at the beginning on May. I am from Quebec but move to Calgary 6 years again

Spirit animal: tiger, I am aggressive at the start line, I want to destroy and win

Runner bio: I have raced over 20 marathons locally and internationally. I also hold the 50k Canadian road record. I have placed 3rd at World 50k Champs twice (2014/15) and a two-time winner of the Victoria marathon. I have been racing Ultra marathons now since 2013. I grew up as a competitive swimmer but moved into running in my late 20’s. I have had the opportunity to race the Calgary marathon once where I placed 2nd

Spirit animal: I like dog they are very nice and honest

Spirit animal: Dog: they are honest and friendly

Spirit animal: I resonate most with the Armadillo at this stage of my life. Slowly and surely planning the way forward during this adventurous chapter. Supported by the adage, I adore spontaneity provided that it is meticulously planned

Recent times/PBs: Lots! But I recently completed the Manchester Marathon on 3:03:58 and was awarded 2nd international female.

Spirit animal: Gazelle, because I have long legs and I am always running!

Spirit animal: My spirit animal would be an Eagle. The Eagle has amazing strength and vision. It soars high, pushes limits, and has humility. These are all characteristics I try and live by. It’s that spirit that allows me to push beyond my potential.