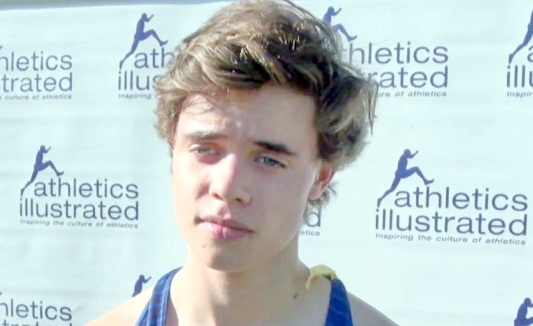 There is no stopping Tyler Dozzi. The UBC Thunderbird athlete took the national 5,000-metre junior (U20) indoors record with a stunning 14:18.92 performance on Sunday, in section 2 at the Northeastern University BU Opener in Boston, MA.

“My goal from the beginning was to definitely break the record, but I was hoping to run closer to my pb from outdoors,” said Dozzi. His personal best from outdoors is five seconds faster at 14:13.34 set in April of this year.

He wasn’t sure he was able to break the record after travelling from Vancouver and he had gear issues.

“My final preparation wasn’t great, as I spent about 12 hours travelling yesterday. I wasn’t sure if I would be able to go that fast when I had about 1200m to go, but I knew I would have to work harder than I have had to break the record.”

While attending Oak Bay High School in Victoria, BC he was the provincial high school cross-country champion.  That school year, he also became the provincial champion in the 1500m distance. Dozzi bettered the 42-year-old provincial 3,000m record, but the record was beaten even more by future teammate (UBC) and roommate Charlie Dannatt.

Dozzi ran from the front for most of the race and finished in the time of 8:16.22. He apparently ran the final 400m-lap in 60 seconds, Dannatt apparently closed in 59, for the win.

Dozzi became the 2016 Canadian Cross Country Champion in the youth division. He won the race handily in Kingston, Ontario in November 2016.

Two weeks prior, he won the BC High School Cross Country Championships that took place just outside of Kelowna at Telemark Nordic Ski Club. Two weeks before that he handily won his Island Zone championships at Beaver Lake in Victoria.

Dozzi is from Terrace, BC, a small semi-remote city in the middle of the province, it is a beautiful place, but did not offer the training environment that Dozzi needed. As a 15-year-old, he took advantage of an opportunity to move to Victoria, which offers year-round training, world-class facilities and two-time Olympian Bruce Deacon. Deacon manages and coaches the Prairie Inn Harriers Youth Team, a high-performance group for youth who want to excel in the sport. Dozzi joined the group and steadily progressed, earning a spot on the Thunderbirds team.

He won the Vikes Invitational youth division the month prior to his national 5,000-metre record race at Northeastern.