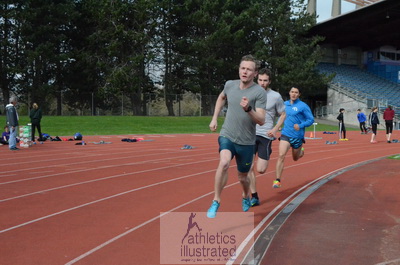 The University of Victoria Vikes fifth-year track and field athlete Tyler Smith, had the sort of track meet last week that makes some of the ups and downs of the first four years more tolerable.

“Tyler had just an amazing weekend,” said Vikes head coach Brent Fougner. “He came back today and ran the 600 like a veteran. He ran very smart and didn’t get caught up in the early speed of the race. He was patient and just worked his way through. He seemed to know exactly what needed to do to win it. That was one of the best races I have seen him run.”

Smith took gold in the men’s 600-m in 1:19.60 winning his heat just ahead of silver medallist Shane Dillon (1:19.66) from Manitoba. Four other Vikes competed in the men’s 600-m event including Vlad Lyesin, Max Serviss, Matthew Thibodeau and Derrick Ushko.

The Vikes track and field team is typically one of the stronger teams in Canada and often win or place high in the Canada West Division of the national U Sport championships.

In 2013, Smith was likely recruited on his sheer racing tenacity. At the time, he exhibited a hint of the strain and style of the great Czech, Emil Zatopek – the only person to win gold in the 5,000, 10,000-metre and the marathon in the same Olympics.

At 17, while still in high school in Wetaskiwin, AB and in Grade 11, Smith ran himself to a 1:47.96 in the 800-m. Wetaskiwin Composite High probably wasn’t sure what that meant, but Fougner certainly did and it was convenient that the Edmonton-area athletes often like the coast for the climate and lifestyle.

In 2013, he told Athletics Illustrated, “It’s one of the most beautiful places I’ve ever been in Canada, and only an hour flight to see my mom who’s a big deal to me.”

Asked about what led to the performance in Winnipeg, Smith said, “I actually rolled my ankle just before leaving to the meet and had not trained for the whole week leading up to it.”

His first run after the injury was at the meet in Winnipeg.

“It felt decent enough to run though. I also really wanted to do the 1km, so I just got into all the races. Since I missed a whole week of training I might as well make up for it all over the weekend.”

He plans to also do all the races over the weekend in the U Sport national indoor championships in Windsor, ON, starting March 8.

“But not much has changed. I just have finally broken down some mental barriers.”

Asked if he will be racing post-collegiate, he was non-committal.

“I also don’t know if I will be racing this summer. It being my last year a lot of things are up in the air.”

Speaking of air, Smith had a heart issue crop up in 2015. Not something that a middle-distance runner can afford. It was an irregular heartbeat, an Arrhythmia.

“I haven’t had any issues since my surgery,” said Smith.

Smith likes Victoria so much that he is considering options on how to stay, move his mom from Alberta or alternatively go to the University of Alberta in Edmonton – for a while.

“I think Victoria was a great move for me. I really love the city, which means I don’t have a lot of plans to be moving back to Edmonton for very long. However, my mom might need some help so it would be nice to be closer to her. Ideally I would have her move out here but you know how it is buying or getting a place to stay out here.”

As for more school, Smith added, “Medicine or physiotherapy are areas that I might want to pursue so U of A might not be the worst place for me for a few years. Like I said earlier, I have a lot of factors to consider this summer. I just want to get through this last semester of classes and U Sport championships.

If he does run during the summer of 2018, he will be sticking to the middle-distances.

“If I do run this summer, I will be running the 800m and the 1500m. I also think that if I am fortunate enough to run and have some other things in my life work out, or at least put off for a few years, I will be working at making the 2020 team for the 800m or the 1500m. The first step to this is to be running Olympic standard this summer which is a bit of a tall order.”