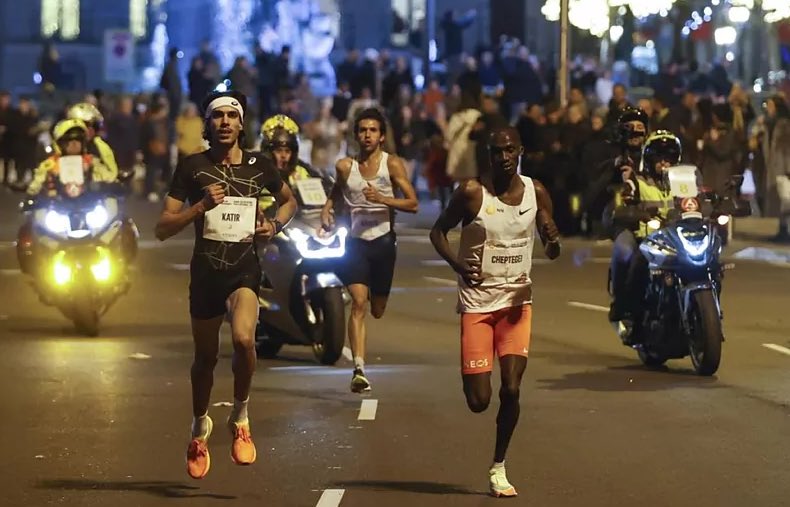 They ran together for most of the race however, Cheptegei appeared stress-free while Katir was clearly working very hard.

As it appeared to play out, Katir lost the gap during the final 2K. Cheptegei earned a standing ovation upon entering the Vallecas Stadium.

Ugandan 🇺🇬 @JoshuaCheptege1 ends 2022 on top by winning the San Silvestre Vallecana 10K in Madrid, Spain 🇪🇸 in a time of 27 minutes and 9 seconds. It was his first race since getting knee problems in the 5000m final at the Oregon @WorldAthletics Championships in July. pic.twitter.com/7QVJR7SZgt

Katir competes for Spain, however, is Moroccan-born. He took bronze last summer in the 1500 metre event at the Eugene World Athletics Championships and silver during the Munich European Championships in the 5000m event. This year’s edition of the San Silvestre Vallecana 10K is not valid for records, apparently, the 2021 edition is as that is where Katir set the Spanish national record according to World Athletics at 27:45.

Reviejo is also a Spaniard. The performance was three seconds off of his personal best.

Chesang at age 19 is one of the fastest U20-level middle and distance athletes in the world. Saturday’s performance is more than two minutes faster than her official personal best of 32:45, which she ran in May 2022. Chesang won bronze in back-to-back U20 World Championships in 2021 and 2022. There may be much more coming from this athlete.

Niyonsaba holds seven national records and one world-best performance from 400m to the 10,000m distance events. In a nearly unheard-of range of ability, the 28-year-old captured a bronze in the 2016 Rio Olympic Games 800m with her 1:56.49 performance. Five years later she took fifth in the 10,000m event at the Tokyo Olympic Games.