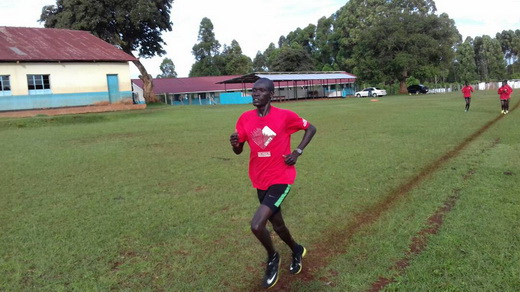 East African runners have dominated the Scotiabank Toronto Waterfront Marathon the past two decades, but one thing this IAAF Gold Label race has never had is a Ugandan victor.

Alex Chesakit is hoping to upset the favoured Kenyans and Ethiopians when he lines up for this year’s event on October 22nd.

The 36-year-old native of Kapchorwa in Uganda’s eastern highlands ran a personal best of 2:11:01 at the 2016 Cape Town Marathon and credits the influence of 2012 Olympic Marathon Champion Stephen Kiprotich for his success.

“Stephen inspired me a lot,” says Chesakit of his famous countryman, who was also crowned the 2013 IAAF World Marathon Champion. “I am expecting a win and to run a good time in the marathon very soon.

“Stephen is the key athlete in Uganda, and Kapchorwa specifically, and a role model for the new generation like Joshua Cheptegei and other youngsters who are coming up now. I always train with Stephen when he’s at home in Kapchorwa.”

Cheptegei, of course, is the young Ugandan who pushed the British superstar Mo Farah all the way to the line in the 2017 World Championship 10,000m final before settling for the silver medal.

It is precisely because of the growing interest in running that in November of last year Global Sports opened a training camp in Kapchorwa on Mount Elgon. Global manages Kiprotich as well as 2016 Olympic champion, Eliud Kipchoge of Kenya. The primary purpose of the new camp is to further develop talent in the region which has produced a string of international level distance runners. Most are preparing for the track but there more whose attention is focused completely on the half marathon and marathon distances.

Two full-time coaches, a massage therapist – all Ugandans – work under a mentor coach from the Netherlands named Andy Ruiter here. At present they are working with about fifteen athletes most of whom are competing on the track still. Training there has lifted Chesakit’s expectations substantially.

“I live just outside the camp, but I am mostly there during the week especially when there is a key training session like track, fartlek, a long run and tempo runs,” he explains. “My house is near the track so when we go for a track workout I walk from home and meet the guys there.”

At home, he has a family, a wife and three young children. Running, he says, is a means to provide a good lifestyle for them.

“Every marathon you run you take a new experience home and we try to improve for the next,” he says of his career to date.

“In Toronto, I am hoping to break 2:10:00 for the first time which will help me to qualify for Commonwealth Games. I missed the World Championships in London due to visa issues. I was supposed to compete but the visa arrived too late.”

Like most East African runners Chesakit treats running as a profession and he realizes that time is fleeting.

“My goal is through running to secure finance for my family but ultimately to inspire many young talents in the sport,” Chesakit admits.

“I hope to compete for another ten years and my desire is to be a coach after retirement and help the new generation to get opportunities in life and show them the right way.”

The Toronto field is the strongest ever assembled in Canada with Kenyans Dickson Chumba, a past Chicago and Tokyo marathon winner, and defending Toronto champion, Philemon Rono already confirmed. Ethiopia will counter through the very talented duo of Solomon Deksisa, (2:06:22 at the 2016 Rotterdam Marathon) and Endeshaw Negesse, the 2015 Tokyo Marathon champion who has a personal best of 2:04:52.

Against such opposition, Chesakit will have his hands full. But the vision of being the first Ugandan to stand on the podium is a powerful one for this talented marathon runner.