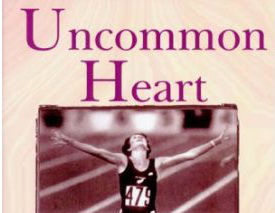 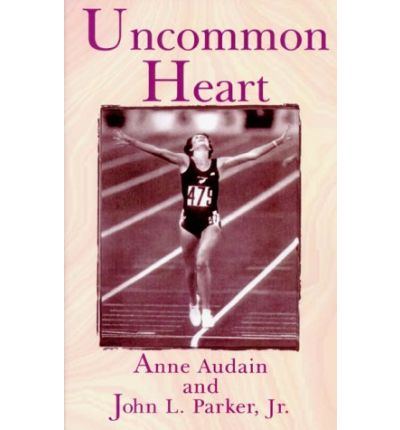 Anne Audain’s book, Uncommon Heart, co-written with John L. Parker Jr. (Once a Runner) is an ardent, tell-all, roller-coaster ride that weaves its way through her life story powered by unrelenting emotional steam.

The photo on the cover depicts the champion athlete, exuberant. There is no question that the exaltation she exudes is as much about the tumultuous years that led up to this record and requisite emotional redemption as it is about the record itself.

Audain was an orphan. Although adopted as an infant, her family supported her well throughout her life and career, as they had supported their biological daughter a few years later. She was fortunate to have the kind of parents she did. As an example of the type of man her father was, he would tell her, “you’re a very special girl, you know, most parents don’t get to pick their babies, but we did.” She grew up with this encouragement – and this may in-part be why she prospered despite experiencing uncommon life hurdles.

She had deformities in both feet and had corrective surgery at 13. Somehow she managed to become a world-class athlete who enjoyed a long career in athletics; taking to road running the most and leaving in her wake an incredible win record.

Her life story: is of an athlete who arrives at an accord with her somewhat conflicted personal and professional worlds – just in time to retire from it all – but only after years of profound drama. Here, in Uncommon Heart she yields before the requisite hub-hub of competitive racing and all the globe-trotting and travel-angst that is packaged into the days and the ways of a world-class phenomenon, as Audain had become.

Riding the wave of the pioneering epoch for women in sport, Audain – although she does not directly broach the subject as much as one would anticipate, at least for the era – was helping to establish a beachhead for women to embrace athletics professionally. This, at a time when the state, as it were, held the athlete in-place by way of forced amateurism; served with a healthy dose of guilt. She was becoming a pioneer of athletics professionalism; shamatuerism be-damned!

In her journal she wrote:

‘Went to lunch and spent an hilarious afternoon [overhearing] a conversation between some American athletes and the meet promoter. I honestly never realized that it was such a business. The money that is involved is phenomenal. One guy is asking $16,000 for himself and 5 other athletes. By asking this much they are stopping athletes like me form getting any. Besides getting upset by this. I had an hilarious time trying to listen. I even sat in the toilet to hear more’.

Audain’s personal life is an engaging and almost underlying allegory to the thread of the wholism of her life story, enough-so, that the main themes of her being a world-class athlete, pioneer of women’s professionalism and her part in the liberation of female athletics, teases the reader for more; the emotional pull is diffused.

At the beginning of chapter 31, “Showdown with Shamatuerism” entry:

‘Jeff Galloway kept me informed of all the political maneuvering going on in the sport. It appeared that a critical mass had been reached and a number of top runners were ready to defy sports officials and openly take prize money, and some of them had organized into a group named the Association of Road Racing Athletes (ARRA). They were being egged on by the athletics shoe companies, primarily Nike, who wanted to he free to sign runners to endorsement deals.

At the end of July I flew to Portland for the Nike Cascade Runoff and the big showdown. Creigh agreed that this might be a historic confrontation and decided I should take one of his business partners, Ken Buckius, a lawyer, with me.

I had every intention of turning professional. If it meant leaving behind further Olympic and Commonwealth Games aspirations, then so be it. I had seen firsthand the kind of money the male athletes were getting under the table in Europe’.

Her stories within-a-story (and there are a few!) pull the reader along in a mezzo-staccato rhythm and at no time does the emotional steam- train ever let up. Audain fuels the angst-ridden fire because at times, she can wear her heart on her sleeve.  She could have taken some license, I am glad she didn’t, because I could not put the book down even at 2:00 a.m.

She takes no prisoners. Although many of the characters that enter her life get off easy, she never completely provides anyone with an absolute character-pardon. For instance, although she is friends with Rod Dixon and provides testimony of what a good guy he is (as we all know) she does nail him on a comment he made in passing regarding her <em>shamatuerism</em><em>.

She also references Alison Roe’s penchant for wearing bikinis to workouts. I will let you read the story and discover how this comes to pass, but it is the tidbits like these that at one moment makes the reader wonder if she is out to skewer someone; to settle a long-standing feud. But then she will turn on a dime, just in time to placate and assuage the person she nearly culls. She is frank and honest, a combination of qualities sorely missing within the pages of many an autobiography.

We all wish for happy endings and although she provides many endings throughout the book, they are not all happy, nonetheless some of the unhappy endings appear to be wise decisions. One is of her coaching change where her coach, Gordon Pirie, and his methods are so diametrically opposed to those of Anne that the effects, transcend her athletics persona. Another unhappy yet wise change is of her marriage, which leads to her finally arriving at that accord with her life conflictions.

The story stands on it’s own however, is skillfully propped by the talents of John L. Parker Jr. Parker’s hand, which does not dominate the character of Audain’s work only complements it in the best ways possible. It is an inspiring story.