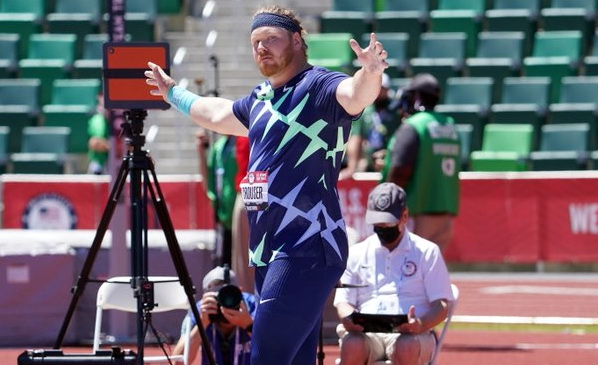 Sydney McLaughlin, a two-time world record holder, and double Olympic gold medallist was announced as the winner of the 2021 USATF Jackie Joyner-Kersee Award.

These Awards are well deserved!🏆

The award winner will be officially honoured at the 2021 USATF Night of Legends Gala on Saturday in Orlando, FLA, as part of the USATF Annual Meeting.

Undefeated in her specialty event, McLaughlin set her first world record on the final day of the Olympic Trials in searing heat at Eugene, clocking 51.90 in the 400m hurdles to take .26 off the former best of 52.16 set by 2019 honoree Dalilah Muhammad. McLaughlin delivered on the promise she showed in finishing second to Muhammad’s world-record run at the 2019 World Championships in Doha, but it wasn’t clear until the final hurdle, where the 21-year-old started to pull away on the road to history. Muhammad was second in 52.42, a time only she, McLaughlin, and two other women have ever matched or bettered.

At Tokyo, Muhammad was out fastest in the final and held a slight lead through the seventh hurdle, where McLaughlin started to draw almost even. Coming off the final hurdle still in the lead, Muhammad was caught by McLaughlin and the duo then gave it all they had over the final 40m. McLaughlin clipped .44 off her previous world record, the biggest reduction in the mark since 1984, and the American 1-2 with both women breaking the previous record was reminiscent of the Kim Batten-Tonja Buford race at the 1995 World Championships when Batten won 52.61-52.62. Dating back to the 2019 Toyota USATF Outdoor Championships, Muhammad and McLaughlin have met in four major finals and have set two world records each.

McLaughlin ran the opening leg on Team USATF’s 4x400m relay, teaming up with Allyson Felix, Muhammad, and Athing Mu to take gold by more than three seconds in 3:16.85, the fifth-fastest time in history. McLaughlin was undefeated in 400m hurdle races this season and also lowered her lifetime best in the 100m Hurdles to 12.65.

The greatest men’s shot-put season in history saw Crouser open the indoor year with a 22.82m/74-10.5 at the ATL meet in Fayetteville, Arkansas to add more than six inches to the previous world record, set by Randy Barnes in 1989. Over the next six meets before the Olympic Trials, Crouser was untouchable in the ring, recording 19 throws of 22.00m/72-2.25 or better, including a 23.01m/75-6 at Tucson, Arizona, on May 22 that put him in an elite three-man club of throwers whoever broke the 23m barrier.

Coming into the Trials at Eugene, aficionados knew one thing — if Crouser hit all his positions and applied force through the shot, the world record would be his. In round four of the final, he knew the moment it left his powerful right hand that this was The One, sending the 16-pound iron ball farther than anyone in the history of the world.

After qualifying earlier in the day with the fifth-farthest throw in history and a meet record 22.92m/75-2.5, Crouser did what almost everyone on the planet knew he would eventually do, smashing the world record with a 23.37m/76-8.25 bomb that landed almost at the end of the sector. Crouser’s throw added almost one foot to the previous world record of 23.12m/75-10.25 set in 1990 by Randy Barnes, and he had two other throws beyond 74-feet in his series.

At Tokyo, Crouser had the greatest shot put series in Olympic history and became only the third man to win back-to-back golds in the event, coming near to his own world record in the final round with a massive 23.30m/76-5.5 to lead a 1-2 Team USATF finish for the second Games in a row. He tacked on a Diamond League title at Zurich a month later and ended the season with 14 straight finals wins and five of the top 10 throws in history.

Bobby Kersee is the 2021 Nike Coach of the Year, earning recognition for the third time in his storied career.

Kersee, the 2005 and 2015 award winner, guided Sydney McLaughlin to two gold medals in Tokyo and a pair of world records this season in the women’s 400m hurdles. Allyson Felix, who has been coached by Kersee since late 2004, took bronze in the 400m at Tokyo and joined with McLaughlin to help Team USATF to gold in the 4x400m relay to become the most decorated Olympic track and field athlete in American history.

McLaughlin joined Kersee’s training group in the summer of 2020 and the change brought dramatic results. Undefeated this year in the 400H, McLaughlin set her first world record with a 51.90 at the Olympic Trials, beating Dalilah Muhammad, the former record-holder, by more than a half-second and taking .33 off her own lifetime best. At the Olympic Games, McLaughlin sliced even more off the WR, stopping the clock at 51.46 to break the global record by the largest margin in almost 40 years. The 22-year-old also lowered her personal best in the 100H by more than half a second to 12.65.

The 35-year-old Felix ran her second-fastest time ever with a 49.46 to medal in the 400m, and she picked up her fourth 4x400m relay gold to bring her tally to 11 career medals at the Games to overtake Carl Lewis as the most bemedaled U.S. Olympic track and field athlete.

The Coach of the Year Award was established in 1998 to recognize the outstanding achievements by coaches in our sport.

Knighton finished fourth in the 200m at Tokyo, clocking 19.93. He set two world U20 records at that distance at the Olympic Trials, going 19.88 to win his semifinal and then 19.84 to place third in the final and earn an Olympic berth as the third-youngest man ever to represent the United States in track and field at 17 years, 186 days. His 19.88 took down the previous world U20 record of 19.93 that Jamaican legend Usain Bolt set in 2004.

A product of Hillsborough High School in Tampa, Florida, who signed a professional contract with adidas this year, Knighton also set four world U18 records at 200m and broke the American U20 record three times. He lowered the American U18 record six times.

Bergen, who was elected to the USATF Masters Hall of Fame in 2008, set world records in the women’s 80-84 age group at 100m and 200m this year and was ranked first in the world in both events. She won gold medals in the 100m, 200m, high jump, and discus at the USATF Masters Outdoor Championships and ran the opening leg on the women’s 65-69 4x100m relay that set an American record by more than seven seconds. The La Canada, California resident didn’t run her first track race until she was 54 years old and has set more than 40 American masters records in her career.

Those on-site annual meeting attendees who wish to attend Night of Legends will be treated to a complimentary cocktail hour at 6:00 p.m. ET before the awards show begins at 7:00 p.m. The theatre-style seating is first come, first served and attendees should arrive in business attire, accompanied by their favorite pair of sneakers.