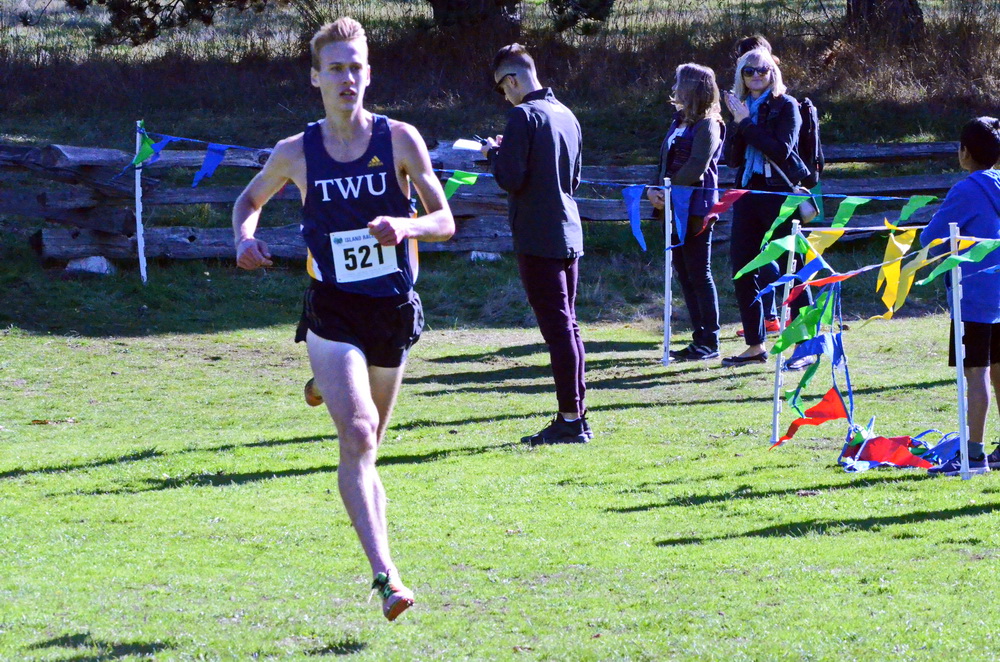 It helps to have home course advantage when racing cross-country. For the local University of Victoria Vikes and Oak Bay High School, racing at Beacon Hill Park in Victoria, BC on Saturday during the Vikes Invitational proved fortuitous; however, they were not without tough competition.

[Results are not complete, however, it is believed that the Thunderbirds women and the Vikes men took respective team wins.]

The meet was capped off with the men’s, five-lap 10K race. Juniors were given the option to race four laps or 8K.

Trinity Western University’s Nick Colyn took an early lead and held it throughout the race. For the first four laps, the only serious threat was teammate Caleb De Jong, who was on his shoulder throughout.

The course features flat, hard sections on the all-weather (sand) soccer fields as well as a series of rolling hills. Half-way, there is one steep hill on grass that separates the fittest from the rest.

“I made my moves mostly on the hills and turns,” said Colyn. “Although I typically like the flats, as I have a big stride, I cornered well today on some of those turns. I enjoyed the backstretch beside the road as well.”

Then the Vikes had four counters in a row, Alexander Nemethy, Derrick Evans, Joshua Kozelj and Jonathan Toombs all rolled into the finish area one after another within 24 seconds of each other.

“Consistency in training was key to my fitness. I got in a good block of training,” shared Colyn. “We have a new coaching staff at TWU, which is working out very well.”

In the 8K edition, the home team took positions 1-4, led by Vikes athlete Jackson Bocksnick who finished in the time of 27:06. Bocksnick has been injured off and on for two years and spent much of that time riding his road bike. Former Vikes athlete Kyle Irvine finished second in 27:17, while Gabe Van Hezewijk finished third in 27:25.

“We have snow on the ground already,” said one Regina Cougar. It was warm, near 20 degrees with no wind and sunny skies for the meet.

Alison Irvine (née Hooper), like Colyn, took a commanding lead early in her 8K race and held on to it throughout. Teammate Chloe Hegland started back a few spots, made up some ground to work with Irvine and then closed from fourth place during the third lap, to finish third overall. Hegland finished just 11 seconds back, stopping the clock at exactly 30:00. UBC’s Sarah Macarthur finished in between the two Vikes taking second in 29:52.

Asked if she looked back during the race having taken the lead so early Irvine said, “I did,” she said laughing. “I wanted to look back often, but I managed to just look back once.”

Irvine is a triathlete who is now a fourth-year Vikes athlete. During the summer she married former Vike Kyle Irvine, who was also racing. She put her triathlon career on hold to study for a Masters of Public Health. She was previously with the national development program for the Olympic distance triathlon.

She took the win in stride as she will be focussing on the provincial and national club championships and especially the U Sport Championships which take place in Kingston, ON.

Alyssa Mousseau ran the shorter 6K distance, peeling off one-lap early to win in the time of 23:34. The Nanaimo native is a UVic Vikes athlete. She was followed in by teammate Bridget Mateyko, who crossed the finish line in the time of 24:33. Bailey Stang of MacEwan Griffiths finished third.

If a cross-country team can challenge Oak Bay High School they have a fairly serious program going on and that would be Portland, OR-based Central Catholic High School. The team, decked out completely in white, was a formidable presence at the meet, but Oak Bay’s Jack Amos proved to be too much too handle. The former Dawson City athlete – like Tyler Dozzi before him – moved to Victoria to work with two-time Olympian Bruce Deacon. He has rounded into great shape. He also took an early lead and continued to run away from his competition throughout the 6K race. Deacon could be heard calling out, “now do you believe you are fit,” as he led the field over the undulating course with control.

Amos won in the time of 19:38. Two Central Catholic athletes followed for second and third in Ben Brown and Jameson Westhead, stopping the clock at 19:53 and 20:07 respectively.

“I wasn’t sure how fit I was, but I have had some very good training under Bruce. I’d like to thank all those who have helped me with being able to race for Oak Bay High School and the Prairie Inn Harriers Youth Team.”

Amos was not permitted to race at first as he was not living in the catchment area for the school, despite the fact that he moved 3,000 kilometres south to do just that.

Asked if he had a chance to speak with Dozzi, who also moved from a small northern town to work with Deacon, he said, “Yes I did. We have texted back and forth and I got some good tips from him.” Dozzi went from unknown to provincial and national champion during his grade 12 year and made the UBC Thunderbirds team that competes in the NAIA in track and field and for the first time will now compete in U Sport or at least the Canada West division of U Sport for cross-country.

Most of the high school athletes will be competing in their provincial championships taking place in Nanaimo in two weeks.

Full results are available at www.racedaytiming.ca.