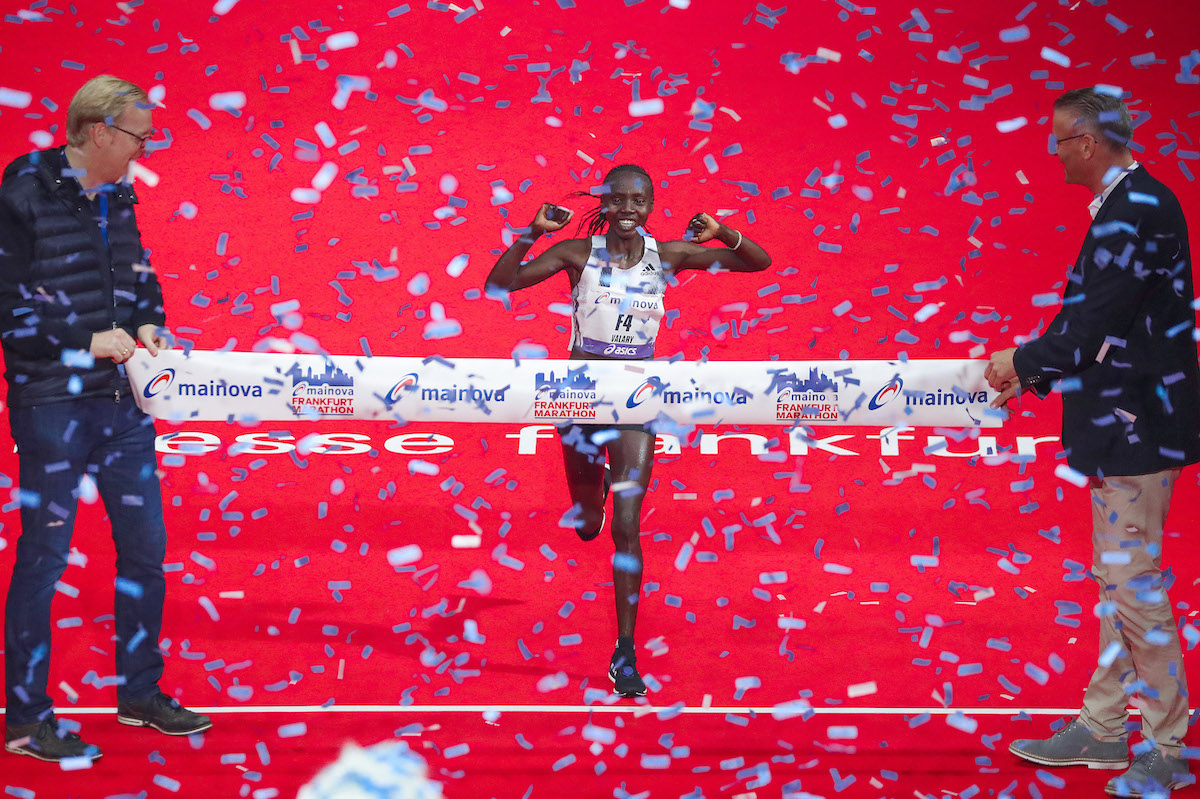 The Kenyan won in 2:19:10, a course record, when she crossed the line in the Festhalle, becoming the 12th fastest woman of all time. She also moved to number five for fastest performances by a woman this year. The Ethiopian Megertu Kebede finished second in 2:21:10 and third place went to her compatriot and last year’s champion Meskerem Assefa in 2:22:11.

The Briton Steph Twell was the leading European finisher in eighth place with 2:26:40, comfortably inside the Olympic qualifying time of 2:29:30 by almost three minutes in only her second marathon. The home favourite Katharina Steinruck ran a personal best of 2:27:26 and also achieved the Olympic Marathon qualifying standard.

In a thrilling men’s race the Ethiopia Fikre Tefera broke clear from his countryman Dawit Wolde to win in 2:07:08. The margin of victory was just two seconds, Wolde crossing the line in 2:07:10 and Bahrain’s Aweke Yimer was hot on their heels in 2:07:12.

Jo Schindler, race director of the Mainova Frankfurt Marathon summed up the day: “I’m delighted about this fantastic course record and that we have fulfilled our dream of having a course record under 2:20.”

The way the 28-year-old Valary Aiyabei began the race was enough to make spectators curious and wonder if another women’s world record was in the making. The Kenyan went through the first 10K in 31:44, well under world-record pace. She certainly knew her pacemaker at the time, since it was her husband Kenneth Tarus until he had to drop out at 15K because of stomach problems. Aiyabei continued in imposing style, going through halfway in 67:42 although thereafter she slowed somewhat. That still put her on course to break 2:20:36, the course record set 12 months ago by one of her distant pursuers, Meskerem Assefa. Valary Aiyabei became the first woman to break 2:20 in Frankfurt when she crossed the line in 2:19:10, improving the course record by 86 seconds.

“My aim was to break my personal best,” Aiyabei later commented, which stood at 2:20:53. Despite her tremendously fast early kilometres, she hadn’t planned an attack on the world record: “Running alone isn’t easy. I had to struggle and grind it out.”

The chase group, some way behind, comprised high-class talent who were themselves on course for sub-2:20 much of the time. Eventually, the Ethiopian Megertu Kebede emerged to take second place in a personal best of 2:21:10. Last year’s winner Meskerem Assefa finished third in 2:22:14 ahead of the European 10,000m champion Lonah Salpeter of Israel, who came home in 2:23:11. These outstanding results moved Frankfurt further up the list of fastest women’s marathons by one place to number seven on the charts. These are calculated by the average ten fastest performances.

Frankfurt’s reputation as a fast course had attracted many elite runners aiming for the Olympic qualifying time. In the case of the women this was 2:29:30 and Britain’s Steph Twell secured this in impressive style in only her second marathon, improving by over three minutes to finish as top European in eighth place with 2:26:40. Her German rival and home town favourite Katharina Steinruck also produced her best ever run to qualify for the Olympic marathon, running 2:27:26.

The leading group in the men’s field went off-track at the start in terms of the projected pace. Running slower than planned, the prospect of a 2:05 finishing time or better drifted out of reach even during the first half. The 14-strong leading group went through halfway in 63:29. It didn’t help that as early as 25 km there was no pacemaker among the leading group. To compound problems, the fastest man in the field, Ethiopia’s world junior record holder Tsegaye Mekonnen, dropped out before 30 km.

It was only at around 35 km that change occurred and the group began to break up. Mark Kiptoo, the Kenyan who set a world Masters record last year on this course for M40 of 2:07:50, dropped off the pace, eventually finishing in 2:08:09 for sixth place. Four men drew away: Kenya’s Martin Kosgey, the Ethiopians Fikre Tefera and Dawit Wolde and Bahrain’s Aweke Yimer, the latter making his marathon debut.

The outcome was decided with less than 300-metres to run before they reached the red carpet in Frankfurt’s Festhalle. At that point, the 21-year-old Fikre Tefera went clear: “I had hoped for a faster time but the pacemaker wasn’t fast enough although the conditions were good.” Fikre won in 2:07:08 while his personal best remained at 2:06:27. Two seconds behind came Dawit Wolde and then Aweke Yimer. Four seconds covered the top three, the closest finish ever in Frankfurt. “It was exciting to have four runners going for victory but we were disappointed with the times,” said the elite race coordinator Christoph Kopp.

More Information is available at: www.frankfurt-marathon.com