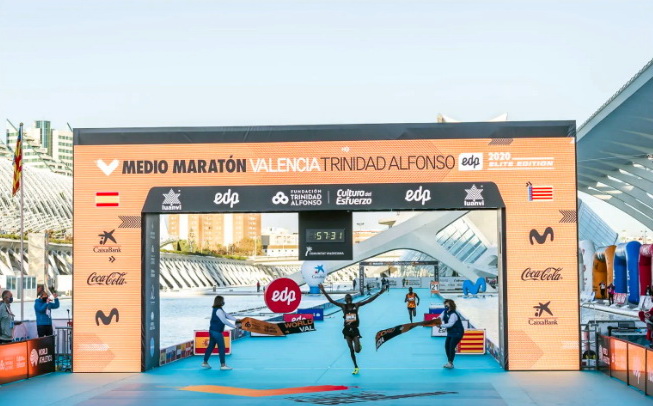 Kandie broke the world record in the half marathon in 2020 running 57 minutes and 32 seconds. The record has since been lowered by Ugandan Jacob Kiplimo to 57:31, in Lisbon last year. Kandie’s continues to be the Kenyan national record.

Eleven men on the elite list have run sub-60 all within the last three years. Twenty-five have gone sub-62.

Expect several national records to be broken and possibly the world record.

Kibiwott Kandie 🇰🇪 is returning to the streets of Valencia on 23 October two years after producing a mind-blowing 57:32, which remains the second fastest half marathon ever 🤯 pic.twitter.com/nAlaEssrl1

Vicoty Chepngeno tops the women’s field with her best of 65:03 from the 2022 Houston Half Marathon run in January this year.

The Kenyan 28-year-old will have fellow Kenyan Margeret Chelimo on her heels who owns a best of 65:26 from Barcelona this year.

The two athletes have the 20th and 21st fastest times in history. Currently, the world record is held by Ethiopian Letesenbet Gidey at 62:52 from Valencia two years ago. It is unlikely that Gidey’s world record will be touched, but all bets are off with the advent of super shoes, that seem to affect each athlete differently, and typically to the better.

The two top-seeded athletes may however break the current Kenyan national record which is held by Ruth Chepngetich at 64:02 from Istanbul two years ago.

Four women on the elite list have run under 66-minutes. Fifteen of the 16 listed have run sub-70.