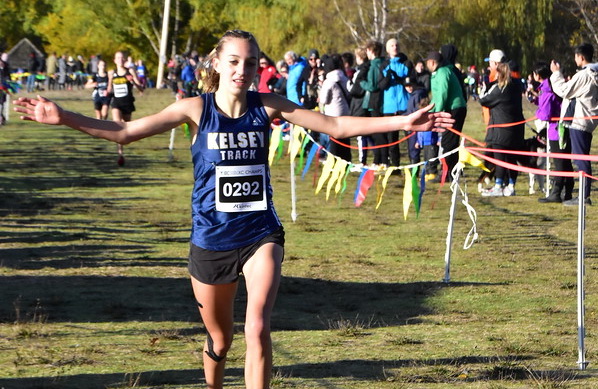 Hatley Castle which houses Royal Roads University is a stunning backdrop, but the ocean, mountains, and city vistas complete the scene that has attracted major Hollywood moviemakers over the years.

Summer ended late for the west coast and just a couple of weeks later it was cool, sunny, and blustery. Tents were rolling away and flagging and cameras hit the dirt. But the athletes prevailed nicely at the BC High School Cross Country Championships.

As expected, it was Ruby Broadbent, who ran away with the win in the 2022 edition of the provincial championships. She attends Parklands Secondary and trains with the Victoria Speed Project outside of school.

Broadbent took off from the rest of the field quickly, to make room as the course narrowed into a right turn after 150m and many of the athletes would find themselves jostling for space.

“I may have gone too fast at the start, but it worked,” shared Broadbent.

Asked about her tactics throughout the course she said, “I got off fast, then decided to surge on the hills and surge more after,” she said with a chuckle.

She looked comfortable the entire time.

“But I paid for it late in the race.”

Ella Ballard of Royal Bay Secondary did well, as she dug deep to finish in second place and clear of the third-place finisher Sydney Clement of Sentinal Senior Secondary located in West Vancouver. The three recorded times of 17:17, 17:43, and 17:52.

Maella Hodgson of Elgin Park Secondary was the first finisher still in Grade 11, taking fourth place. She finished the 5K course in 17:58.

All will be racing at the national club championships in Ottawa, Ontario on November 26.

This was the only race where a frontrunner did not take off at the gun to bury the field early.

Five athletes separated themselves from the field and stayed together for most of the race. It was only during the second half of the final lap did Tyler Browne of Oak Bay High School make a clear and decisive move. He let fly a kick on a long downhill stretch and took the lead for good.

“It was on that final upper section where I thought that this is where I have to open up a kick. I did and hung on for the win,” said Browne.

“Until then, there was at least three of use for most of the race.”

Mulugeta, at age 17, ran the Eastside 10K in Vancouver in September finishing in the time of 31:24 for seventh place. Three of the athletes in front of him were Olympians.

Apparently, Mulugeta ran a made-up 10K in Surrey with favourable downhill sections in the time of 29:23. Although not accurate nor a performance that can be ratified, it is fast and suggests that perhaps he was under the weather on Saturday.

The pre-race favourite — Charli Mlotshwa — who also had the largest entourage, delivered. Smartly, he sat in field for the better part of the first lap, then decided to stretch his legs. Looking comfortable, he held the lead for most of the second half of the race.

Mlotshwa attends Oak Bay High School, while Sada was representing Walnut Grove Senior Secondary and May WJ Mouat in Abbotsford. The two are clubmates in the Valley Royals Track and Field Club.

“We train together outside of school and know each other well. We will be going to nationals together too,” said Sada.

“I was fifth in the provincial club championships (U16, 3K) and missed third, so my goal was to get a medal today,” shared May, who seemed pleased with his performance. Sada was second to Mlotshwa in that race, so he did well to move up at the Royal Roads University at Hatley Castle course in Colwood (Greater Victoria).

Alexa Dow dug deep for the win. It was the type of effort that championships are made of. She was the pre-race favourite but left nothing to chance, not even an IT band niggle was going to prevent her from winning — which she was sporting physio tape for.

She won, and then took 20 minutes to recover. The Mill Bay (20 minutes from Colwood) native clocked a 15:33 finish time.

Like Mlotshwa in the junior boys, Dow won the club championships two weeks prior.

Asked if there was an advantage to having the home course the Frances Kelsey student said, “yes it helped. We had trained on here ahead of time, we did a practice race as well as some jogs, so I think that helped.”

The para race that started the day off had just four competitors, but not for a lack of excitement. Abeti Gutchi, took off at the gun — as announcer Paul O’Callaghan said — “like Usain Bolt and the second-place runner is in pursuit.”

It was an impressive start, however, he would finish in second place, but not before opening up a sprint over the final 150m. Ronan Wiens won handily, smartly avoiding the all-out effort to keep up.

Team results will be available soon.