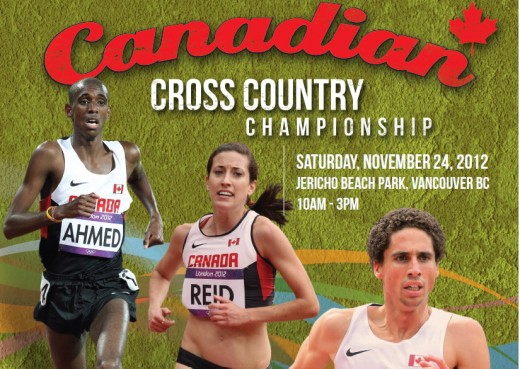 Defending champion Cameron Levins of Black Creek, B.C., will face tough competition from fellow 2012 Olympic Games teammate Mohammed Ahmed of St. Catherines, Ont., in the senior men’s race. Both Levins and Ahmed finished in the top 20 in London in the men’s 10,000-metres. Kelly Wiebe of Swift Current, Sask., will also bring tight competition to the field as he recently was crowned the 2012 CIS (Canadian Interuniversity Sport) Cross Country Champion.

Keep your eye out for these junior racers

Robert Denault of Aurora, Ont., is returning from a silver medal at the 2011 Canadian Junior Cross Country Championships and has his sights on gold for 2012. In the junior women’s race IAAF World Youth team member Jaime Phelan of Kitchener, Ontario will be a strong contender of those in the mix for the title.

Competition will officially be underway at 10:00am local time (1:00pm Eastern Time) with Canadian titles on the line for masters, junior and senior categories.

Check out these interviews on athleticsillustrated.com as they preview the Championships:

Be sure to follow www.athleticsillustrated.com  throughout the Championships for more.

For the latest news, schedule of events and results visit:  www.xcountry.athletics.ca. You can also follow all the action live on Facebook (CanadaTrackand Field) and on Twitter
@athleticscanada. Use #cdnXCnationals2012.