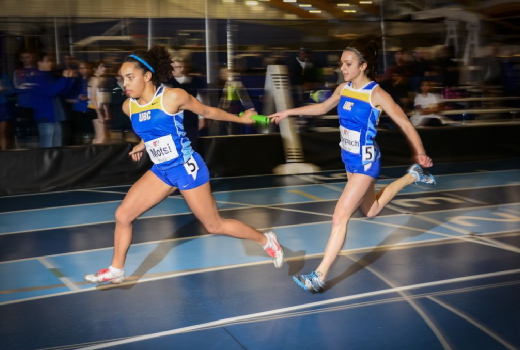 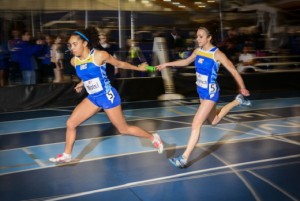 Saturday, February 1st nearly 500 athletes participated in the 2014 Vancouver Sun Jerome Indoor Games at the Richmond Oval – a legacy of the 2010 Vancouver Winter Olympic Games. According to Doug Clement, until recently, it had been a challenge to re-introduce indoor track and field to British Columbians.  “The last indoor meet in the lower mainland was in 1988 and several generations of youth have never participated indoors,” he said. “We have however; in our fourth year started to make an impression on our young athletes in this province with a record number of entries in the Vancouver Sun Jerome Indoor Games.  This resulted in the 49 new records from athletes from 10 to 63 years of age.”

It didn’t take long for the Vancouver area track and field community to embrace the oval, as the Jerome meet has operated each year since the Olympics, making 2014 year number four. Of the near 500 participants Saturday, many came from places located on Vancouver Island as well as the interior of the province, “We are particularly pleased to see athletes form Victoria, Nanaimo, Campbell River, Kelowna, Nelson and the Fraser Valley,” said Clement.

Leading up to the meet, Clement was busy promoting the meet on facebook as well as via email, Google Plus and by other social media services. Always moving forward, the games offered a paperless event program. In advance of the meet there was a media release telling spectators to bring their smartphones. The release read, “For the first time there will be no printed program for spectators.  The program including the meet records, schedule and start list will be available on the meet website.  Everyone is encouraged to access this information via his or her cellphones or tablets at the event in the Richmond Olympic Oval.” Doing so, makes the games a little greener and saves publishing costs of the one-use paper programs that are typically distributed at sporting events.

Next up for the track and field community is the Vancouver Province Gran Forza indoor meet, which will also take place at the Richmond Oval. Clement said, “We expect to have an increase in the number of high school teams participating in the fourth annual Province Gran Forza V presented by TELUS on March 29th.”