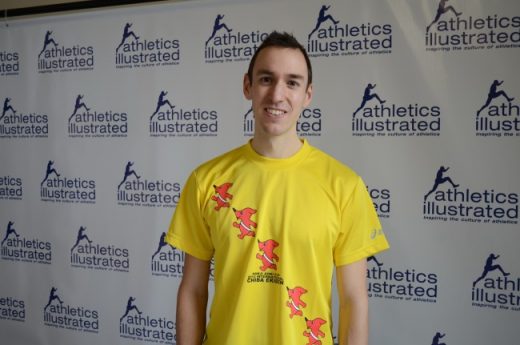 The 33rd annual Vancouver Sun Run takes place Sunday, April 23 and as per usual the front end of the men’s field is looking competitive.

There is a good mix of Kenyans and Canadians who will battle for the podium.

Vancouver’s Geoff Martinson is one of the Canadian favourites. While he is retired from his international track career he continues to compete at a high level on the roads. He should challenge for a top-three position, perhaps the win.

Martinson, originally from Prince George, went to school at the University of Victoria and had a productive CIS (now U Sport) career for the UVic Vikes, before competing for Canada internationally. He went on to represent Canada at the 2011 IAAF World Track and Field Championships that took place in Daegu, Korea.

He was a 1500-metre specialist, who now competes over distances from 5K to the half-marathon.

In the 2016 edition of the Vancouver Sun Run, Martinson finished in sixth place with a time of 29:26. His best half-marathon was a second-place finish in Victoria at the 2013 GoodLife Fitness Victoria Half Marathon, where he finished in 1:05:18.

“It should be a good race,” said Martinson. “It is always hard to tell who will show up, but I expect it to be a tight competition this year. I can’t say for sure where my fitness will be at, but I’m planning to run with the leaders and then see what happens.”

Martinson will be up against some stiff competition from fellow Canadians and a few Kenyans.

Tristan Woodfine from Guelph, Ontario will be a top finisher. He just came off of an 8K personal best performance in Toronto on April 8, finishing in 24:15. His personal best in the 10,000-metre event is 28:56.53 from the Payton Jordan Invitational three years ago, at age 20.

Kevin Tree ran 29:18.56 during the 2016 Canadian Track and Field Championships. While the 24-year-old Tree’s personal bests in the 1500m to the 5,000m are faster than Woodfine’s, it is in the 10K and beyond that Woodfine has competed at a slightly higher level, for now. It will be an exciting race between the two.

Paul Kimugul or Daniel Kipkoech are two Kenyan runners that will give the Canadians a literal run for their money,

however, a win is not guaranteed. There is also Solomon Rotich, who has run the Sun Run as fast as 29:58 – a little outside of the leaders.

“I feel good, but I do have some back pain that I can feel from time to time,” Shared Kimugul. “But otherwise I am in good shape. I hope to run under 29-minutes”

Not so for Leonard Kipkoech (not related to Daniel). “Because of the colder winter, I didn’t get in as much training. I am not as fit as before,” he said. He has run as fast as 29:05 during the 2015 Vancouver Sun Run and looks to be around 30:00 this time around, which suggest he will compete with Rotich.

Kip Kangogo is a Canadian athlete who has competed at a high level for several years. Currently, he lives in Lethbridge, AB. His best is from his 2010 Sun Run win, where he ran 29:02. Does the 38-year-old former Kenyan still have the legs to hold off the others?

The 2016 IAAF World Mountain Running Champion Joseph Gray is in the race. As an 11-time USATF Mountain and road running champion, the Colorado Springs athlete clearly has the cardio-vascular system to compete with the top runners, however, will he be ready for the flat-to-lightly rolling road course?

Two other top runners are scratched. Langley’s Declan White will be focussing on his outdoor track season, so will be giving the event a pass, while Calgary’s Trevor Hofbauer is out with an injury. White has run the race as fast as 29:58, while Hofbauer has a 29:28 to his credit.

The masters (40-plus) field is thick with talent, possibly led by Vancouver’s Jeremiah Ziak, providing that he is able to get to the start line in one piece. He is nursing an injury and hopes to toe-the-line for the BMO Vancouver Marathon. He is unwilling to sacrifice the marathon by causing further injury during the Sun Run.

“I was hoping to run low-31s this weekend and then around 2:27 at BMO (there’s some pleasing math in this since this would equate to a slowdown of one minute per year since my 2:17 in 2007). We’ll see what happens with some more aggressive physio over the next few days, but I’ll only race if I can actually have a chance of enjoying the experience and not end up hobbling through it,” shared Ziak.

In the mix is beer mile and beer two-mile legend Jim Finlayson from Victoria, Jeremy Deere of Calgary, who runs like a deer, and then there is two-time Sun Run masters champion Oliver Utting of Burnaby. The masters race should be an exciting competition.

Shoestrings: Little is known about Bernard Koske of Kenya, who is listed a top runner. Vancouver’s Dylan Wykes is in the race, he is an Olympian and one of Canada’s all-time top marathon runners. He is a young father and is focussed on family first, therefore he will not run as fast as his capability; with the leaders – he is not as fit as he could be.  “I just can’t miss the Sun Run, man,” he said.

Rio Olympian Chris Winter of Vancouver will race. He has retired from the track but continues to keep himself in shape. If he is fit, he can challenge for a top position. Winter is a former 3,000m steeplechaser and a prolific cross-country runner.

Matt Setlack from Cold Lake will be racing, he appears to be fit. There are several other Vancouver area runners who will finish within a minute of the leaders, making for exciting age-group racing. Trinity Western University Spartan’s Caleb Dejong may surprise with a high-level performance Sunday.

For all of the Vancouver Sun Run details, click here>>