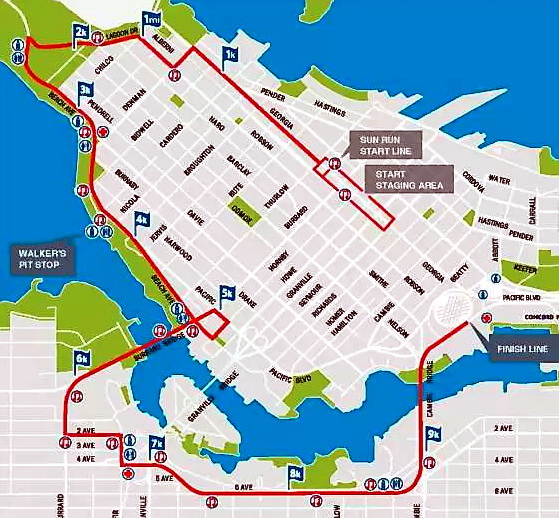 Vancouver Sun Run organizers have assembled yet another strong field of elite talent for Sunday’s 10K race that will take place on the streets of downtown Vancouver.

Leading the way in the men’s field is a list of approximately 40 runners who could finish between 29 and 31 minutes. Based on personal bests the winner may be from Fort Collins, CO in 23-year-old Jerrell Mock. Should he win, it would be a threepeat for American runners at the Sun Run and four of the past five years.

He should finish first when he comes off of the Cambie Street Bridge ramp beside BC Place Stadium Sunday morning. Some of the other top runners include Vancouver’s Geoffrey Martinson, Kevin Coffey, Justin Kent, Rob Watson, Theo Hunt, Evan Esselink, Anthony Tomsich, and Brendan Wong.

In the women’s race, it will be interesting to see if Kinsey Middleton will take the next step in her career and challenge 2016 Rio Olympian Natasha Wodak.

Wodak is flying in Saturday from a short stint at altitude in Flagstaff, AZ, while Middleton arrived earlier in the week from Boise, Idaho.

“It would be good to see if I could get around the 32:40 mark on Sunday,” said Middleton. “I am feeling like I am in good shape and will be racing the Payton Jordan Invitational, looking for the Olympic standard in two week’s time,”

Wodak owns the national record in the 10,000m event at 31:41.59. She has run sub-32 several times on the track and had an excellent 2018 Gold Coast Commonwealth Games performance.

In 2010, Kelowna’s Malindi Elmore won. She finished the race in 33:06. Elmore, a 39-year-old mother continues to run very well. In January, she ran her marathon debut in the time of 2:32.15 in Houston, TX. She could threaten Middleton and Wodak.

Middleton also ran an excellent marathon debut within the past 12 months, finishing the Toronto Waterfront Marathon in the time of 2:32:09. Her personal bests nearly match Elmore’s with a 33:20 Sun Run and a 33:48 official road best from Ottawa.

Elmore has run 33:06 and 33:41 respectively. Also in the conversation should be Dayna Pidhoresky with her best of 33:20 from the TC10K in Victoria. She has also run an aided 32:02 from Toronto. She is coming off of another strong performance at the historic Around the Bay 30K. She is the only four-time winner and landed on the podium again this year.

Athletes have their work cut out for them in challenging the 2020 Tokyo Olympic qualifying standards. For example, the Payton Jordan Invitational offers what is considered one of, if not the fastest 10,000m races in the world and there are not many to choose from – so athletes want to be fit for the Stanford University track where it takes place.

The meet takes place in two week’s time and athletes will use the Sun Run as an indicator of where their fitness is.

The women will have to run a new national record of 31:25 to qualify for the Olympics. That means that they will need to run more than 16 seconds faster than Wodak’s Canadian record.

The men’s 10,000m record is 27:02.35 by Mo Ahmed of St. Catharines, ON. There are just a handful of other Canadian men who have run faster than the men’s standard of 27:28 including Ahmed, Cameron Levins, and the retired Simon Bairu.

Post-race interviews and stories will be posted Sunday evening and Monday.