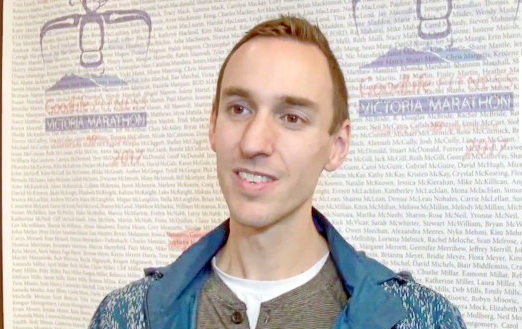 As usual, the elite field that will be leading over 30,000 runners and walkers through the streets of Vancouver on Sunday, is impressive for the 34th annual Vancouver Sun Run. Rumour has it that the sun may even make an appearance.

Although he is seeded number one, it is likely he will be beaten by any number of Canadians including Geoff Martinson who is from BC. Over recent years the Prince George native has spent time in Vancouver, Oliver, and Victoria.

The 32-year-old ran one of his best races in 2018. He finished the Houston Half Marathon in a new personal best time of 63:38. In June of 2017, the former middle-distance specialist ran a 10,000-metre best of 28:48.33 in Portland. This is pretty fast stuff for a “retired” runner and a student studying to become a pharmacist.

After graduating from the University of Victoria, where he led the team as a 1500-metre runner, Martinson went on to compete in the 2011 Daegu IAAF World Track and Field Championships. He appears to be enjoying a second career as a distance athlete.

Ross Proudfoot, who has spent some time training on the coast, was part of the juggernaut in the U Sport system with the University of Guelph Gryphons. He is just as capable of taking out Kimugul as Martinson is and perhaps the race will be between them as well as a handful of others.

Twenty-eight-year-old American Brendan Gregg has run fast enough to put the scare into the other runners. He had gone a few years without a new personal best over the various distances that he raced, that is until 2018, where he ran 15-kilometre and half-marathon bests in Jacksonville and Houston respectively. The Houston Chevron Half Marathon performance was outstanding, where he crossed the finish line in the time of 62:55. It was a stacked field and he finished 26th behind primarily East Africans.

The Gate River Run 15K performance took place on March 15, where he finished in the time of 43:25, just 1:19 behind the winner Leonard Korir.

Gregg, a former Stanford athlete, is now coaching with the famed Hansons Running.

Although Yves Sikubwabo of Quebec has personal bests that are just a little slower than the athletes seeded in front of him, he very easily won the U Sport national cross country championships in 2017 in Victoria, BC. With more volume to his training and plans to do a marathon, he may push the leaders for most of the race. He powered away during the final kilometre in Beacon Hill Park with authority and ease.

Also in the race are international racewalkers Inaki Gomez and Evan Dunfee. They have the ability to run well, however, may racewalk the Sun Run.

The top local masters are Vancouver’s Jeremiah Ziak, Jeremy Deere of Calgary and Colin Fewer from Paradise, NFLD. In the 45-49 age-category is Victoria’s Craig Odermatt who is always within striking distance of the lead masters (40-44).

A couple of notable retired runners are Olympian Chris Winter (3,000-metre steeple) and two-time 2:13 marathon runner Rob Watson, both of Vancouver. The organizers just need to coax retired talent Kelly Wiebe back into running and Canada could field one of the world’s best retired Ekiden teams.

The women’ race will be led by a pair of 2018 Commonwealth Games athletes and national record holders – both from Vancouver in Natasha Wodak and Rachel Cliff. The two ran impressive 10,000-metre races finishing fifth and 11th respectively in the Gold Coast two weeks ago. Cliff also broke the national half-marathon record by running a 1:10:08 in Woodland, TX on March 3rd.

Fellow Vancouverite Dayna Pidhoresky appears to be in great shape. She is coming off of winning the historic Around the Bay 30K on March 3rd. She is the first Canadian women to win four times.

Scotland’s Sarah Inglis may be a handful. She is coming off of a national 10-mile championships win in Motherwell, UK, finishing in the time of 55:34. Inglis has been known to bolt off from the gun. Sometimes that works for her, and may so in the Sun Run with the big downhill start. She has run the 5,000-metres in the time of 15:41.29, which is good for an approximate 33-minute 10,000-metres performance.

Although it has been at least five years since 31-year-old Kenyan Jane Murage has run notable personal bests that are competitive with the Vancouverites, she could show up ready to race in the 32-33-minute range. She, like Kimugul love racing on the west coast.

Cleo Boyd and Claire Sumner are two young athletes that may place top-10 and may surprise on race day. Sumner had an outstanding performance at the 2017 U Sport Cross Country Championships in Victoria for second overall to international runner Sasha Gollish.

The top masters women include Victoria’s Marilyn Arsenault who owns several national records for the 40-44, 45-49 and 50-54 age-groups. Vancouver’s Catherine Watkins has been virtually unbeatable on the roads. The two should have a great race.