Vancouver’s Dayna Pidhoresky will be racing this weekend in the Humana Rock ‘n Roll New Orleans Half Marathon in an attempt to make Team Canada for the 22nd annual IAAF World Half Marathon Championships that will be taking place in Cardiff, Wales on March 26.

Pidhoresky owns a half-marathon best of 1:11:45, which she ran in the Niagara Half Marathon in 2011, “The goal for this weekend is to get in the mix for World Half selection, which will probably mean running around 1:13,” said the 29-year-old.

On January 17th this year Pidhoresky attempted her debut in the marathon at the Chevron Houston Marathon. Her pacing was going well; however, she began to have GI issues and was forced to drop out.

On February 14th she won the Vancouver First Half Half Marathon in the respectable time of 1:15:11, on a course that isn’t considered fast on a cool and windy day.

“I got pretty sick with a cold or flu after the First Half race, so I have been pretty out of it the last couple of weeks. I am hoping to give it my best shot though as I know I would regret not trying to get on the World Half team!” 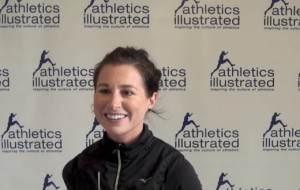 The time standard for women is to run under 1:16:00, which Pidhoresky clearly has already done, she also needs to be one of the top three Canadians before March 10th, which is the final team selection date by Athletics Canada, while the declaration deadline to run the World Championships was March 7,, 2015.

The two fastest Canadians during the qualifying window at this time are Natasha Wodak and Lanni Marchant who have run as fast as 1:11:20 and 1:12:50, respectively. Rachel Hannah of Toronto is the next fastest runner with her 1:12:25, which she accomplished on October 18, 2015 in Toronto, while fellow Torontonian Sasha Gollish has a 1:12:35 to her credit which she ran in the Rock ‘n Roll San Antonio race on December 6th. Laura Batterink of Toronto ran the fifth fastest time of 1:13:13 in Philadelpha on October 31st. All athletes have declared that they intend to race, however, Wodak is currently recovering from injury; therefore Marchant with her 1:12:05 is likely the lead Canadian who is able to run Worlds.

During the qualification window, Pidhoresky has run as fast as 1:13:14 at the BMO Vancouver Half Marathon, however, performances on that course do not meet qualification standards. Likewise Marchant as run as fast as 1:11:08 on the Scotiabank Vancouver Half Marathon course. Road races must have a net downhill of less than one-metre per kilometre and the course must not be point-to-point or the start and finish shall not be further apart than 50% of the race distance.

The Canadian Half Marathon record is owned by Lanni Marchant with her 1:10:47 performance from Nashville, TN, which she accomplished last March.