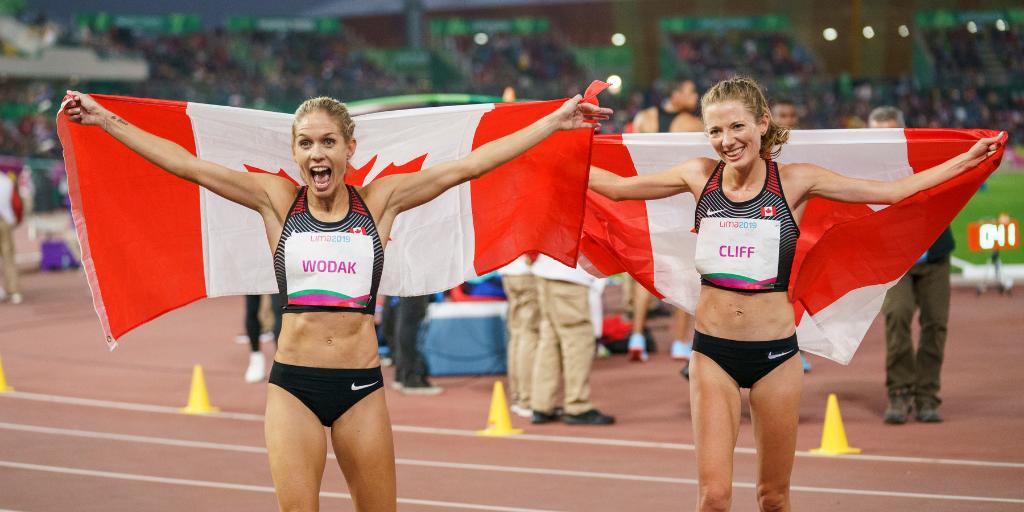 On Tuesday, Vancouver’s Natasha Wodak, the national record holder in the 10,000-metre event, earned a gold medal during the 2019 Lima Pan Am Games. Not far behind were Risper Gesabwa representing Mexico for silver and Rachel Cliff also of Vancouver finishing in third, earning the bronze medal.

It was at least her fifth-fastest 10,000m performance all-time. Her national record is 31:41.59. For Cliff it was one of her fastest times, however, she has run sub-32 at least twice. The run for Gesabwa was a new personal best.

Asked about the feeling of winning gold she said, “It feels fantastic! I felt good from the gun. I stuck with my race plan and stayed focused and found that extra gear when I needed it. I have worked on my finishing kick in training over the past few years, and it’s starting to show in races.”

Wodak passed through 9K in 28:53.13 with the lead at approximately 32:10 pace, the final 2.5 laps would have been her fastest of the race. She had a very similar performance during the 2018 Gold Coast Commonwealth Games, however, finished fifth in the time of 31:50.18.

For Cliff, the bronze may be bittersweet. She not only led for 21.5 laps, but she finished behind a Kenyan athlete who ran for Mexico. The worldwide governing body, the International Association of Athletics Federations (IAAF), at press time, have her listed as Kenyan.

Both Cliff and Wodak are familiar with the East African as they have raced her on the roads in Canada. Both have run faster over the 10K, while Cliff’s national marathon record at 2:26:56 is nearly four minutes faster, while her national half-marathon record at 1:10:08 is over 90 seconds quicker than Gesabwa’s.

Mediotiempo, a Mexican news source online referred to her as a naturalized Mexican.

Her name is Risper Biyaki, she is 30 years old, she was born in Kisumu, Kenya, and on Tuesday she gave Mexico a silver medal in the 10 thousand meters track at the 2019 Pan American Games in Lima. With a time of 31:59:00, surpassing her own personal brand and only below the Canadian Natasha Wodak, the naturalized Mexican endorsed the Lima National track to climb the podium.

According to Mexican nationality law, she must renounce her Kenyan citizenship:

Although she may have been living in Mexico off and on since at least 2012, the popular Bellin 10K that takes place in Green Bay, Wisconsin lists her as Kenyan in 2019; she won the race. In 2016, she won the Around the Bay 30K in Hamilton, ON as a Kenyan.

According to the Citizen digital of Kenya as of February 2019, she was a Kenyan:

According to the Association of Road Racing Statisticians (ARRS) she is Kenyan.

She may have earned her naturalized citizenship in Mexico fair and square, however, there has been great concern for several years about Kenyan athletes running for a different country like Turkey or Bahrain for example and possibly never stepping foot in that country.

Gesabwa should let the IAAF know that she is now running for Mexico.

Otherwise, Canada would have earned gold and silver in the 10,000m event, if she hadn’t changed citizenship.

The IAAF did put a stop to transfers in 2017, on the heels of the 2016 European Cross Country Championships. Kenyans Yasemin Can and Meryem Akda went 1-2 in the race representing Turkey. It is debatable whether Turkey is truly a European country anyway, however, at the time, some athletes suggested that they were sure the Africans had never even stepped foot in the country. They were apparently bought.

Bahrain continues to flout immigration laws with several top-level Kenyans representing the country and earning many times the income from Bahrain while remaining in Kenya.

According to the IAAF:

There appears to be no record of Gesabwa competing for Kenya in international competitions to date.