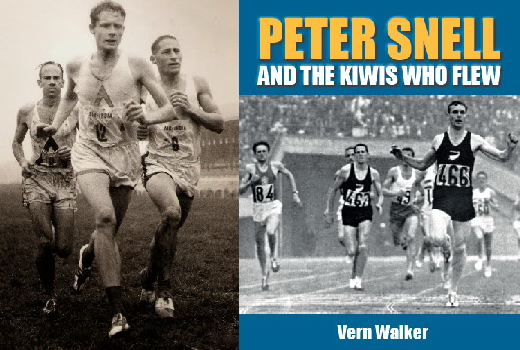 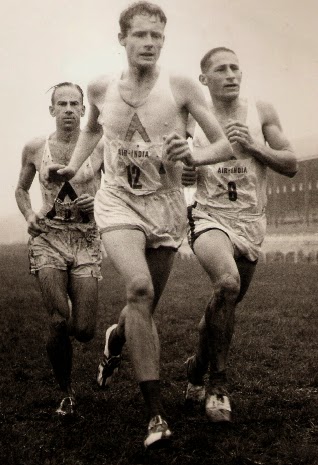 Vern Walker of New Zealand is an athlete who competed nationally during the country’s golden-era of running of the 1950 and 1960s and beyond. Although he didn’t gain quite as much prominence in the worldwide running community as such athletes as Peter Snell, Barry Magee, Murray Halberg or later Rod Dixon, Dick Quax or Lorraine Moller to name a few, he was very much a competitive runner and a member of that Arthur Lydiard-led group of high flying Kiwis.

He is therefore well qualified to write about those athletes mentioned above and many others who fill the pages of his book. So it is timely that he recently released the title, “Peter Snell and the Kiwis Who Flew” – a book consisting of 305 pages and 124 photos that retails for around $40, depending on where you are from.

PETER SNELL: “Vern Walker has a writing style unlike any author in his field. His ability to capture the essence of track races, which are vividly described, combined with a flair for statistical detail, makes this book compelling reading.”

MURRAY HALBERG: “A brilliant and highly descriptive account of the many thrilling races of the great era. The author colourfully describes the fear of defeat and the joy of victory.”

BILL BAILLIE: “Only an athlete who competed throughout the decade (1956-1965), as the author did, could write such a very readable account.”

CK: How is the book selling?

VW: I have to say that the book is selling briskly, even though the market is depressed in New Zealand at the moment. I personally am promoting it vigorously. The market beyond New Zealand is now responding by purchasing through Fishpond.nz (Auckland, New Zealand), The front cover depicting Peter Snell winning the 1,500 metres at the 1964 Olympic Games held in Tokyo, and also John Davies winning the bronze medal, makes it easy to sell the book. Fifty years after Snell pulled off his spikes for the last time his name still resonates in this country. I have sold 19 books within our retirement village alone, to retirees who recall the days when in 1962 over 80,000 people attended athletic meetings up and down New Zealand, and saw Snell better three world records in one week.

CK: Why now, did you choose to write this book?

VW: I needed to write the book now, or I would eventually run out of athletes to interview! After all, we are now all in our late 70s-early 80s. I started interviewing the older ones first! Moreover I could see that the new tool of the email connected me with athletes from around the globe and who were quick and keen to answer the queries I put to them. For the first time I could actually view some of the key races on YouTube, and thus provide accurate descriptions of them.

CK: Do you find it ironic that in 1936 Frederick Webster wrote the book The Science of Athletics, which inspired Lydiard, whose principles are still used today by the best athletes?

VW: Ironic, yes, indeed. Captain Frederick Webster, a coach at prestigious Loughborough College, England, and most likely connected with the establishment. Lydiard, certainly not a qualified coach, was a working class man who delivered milk bottles into letterboxes during the night, and later was a foreman at a shoe manufacturing company. Lydiard often clashed with the establishment in New Zealand; chalk and cheese, but 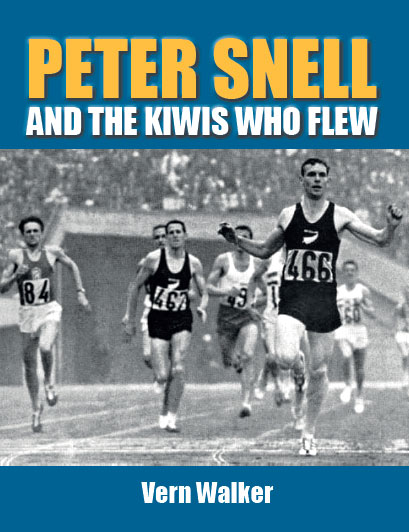 CK: You have the best initials ever.

VW: Never thought of my initials being connected with the famous German-made car. Being a nationally ranked distance runner, maybe speed was a common denominator.

CK: Or being mechanically sound. How was the response from the Lydiard-trained athletes?

VW: There was an overwhelming response from Lydiard-trained athletes and also from middle and long-distance runners in the U.K. Germany, USA, Canada and Australia, and of course the length and breadth of New Zealand.

CK: Did you get around to Japan or Finland? That may require a second book, alone!

VW: With New Zealanders, Barry Magee and Jeff Julian both winning major marathons in Fukuoka and Tokyo in 1960 and 1963, as well as Lorraine Moller winning five marathons in Japan, the profile of our athletes in that country is still pretty high. Nobby Hashizume continues to enhance the Lydiard systems in Japan. Arthur Lydiard is still remembered in Finland and was honoured by the President of Finland for “his services to sport in Finland.” My publisher will have to consider spreading the Lydiard message, via my book, to markets in Japan and Finland.

CK: Looking back, has your perspective changed compared to when you were in the mix?

VW: My own perspective of those races 50-60 years ago has not changed. You are putting your body on the line. You are really testing yourself. These are very vivid memories. You never forget a P.B., a victory and an almost perfect race, all this, as if it were yesterday. As if the sweat is still wet upon your face.

CK: Who was the most interesting characters that you talked with?

VW: Bill Baillie was the most interesting character of them all. He was the world record holder of the One Hour Run, and the 20,000 metres, bettering the times of the great Emil Zatopek. His meeting up with Zatopek in Prague in 1994 was one of the most engaging chapters of the book. He was an irrepressible person. Huge ups and downs in his career, but he loved competition. In 1965 he competed in 54 races, ranging from 1,500 metres to the marathon, for 31 wins, and two overseas tours in 13 countries, plus a close sixth place in the 5,000 metres at the Tokyo Olympic Games. In his mid-60s he was winning age group world titles in duathlons and triathlons. He even competed on his wedding day. A carpenter, turned taxi driver, because, as he put it, you could stop your taxi anywhere and start training. He qualified as a pilot and these days bashes a golf ball all over the place, not always on the green!

CK: Did he marry an athlete?

CK: Back then, could you fully appreciate the golden age of New Zealand athletics, while training under the gold standard, sort-of-speak?

VW: No. Many did not fully appreciate the Lydiard way of doing things. Many of us could not see the whole, because the many parts of his system were not always seen as a jigsaw puzzle, with all components a part of the whole plan. Maybe the better runners, such as Peter Snell, Murray Halberg, Bill Baillie and Barry Magee, more clearly saw the complete picture. This is why they were better runners. After the Rome Olympics when Snell and Halberg won their gold medals, Arthur was deluged by runners everywhere, all wanting him to train them. He could not completely provide one-on-one advice, suited to the strengths and weaknesses of each runner. Looking back many runners were suited to a higher percentage of aerobic work, than anaerobic training, and vice versa.