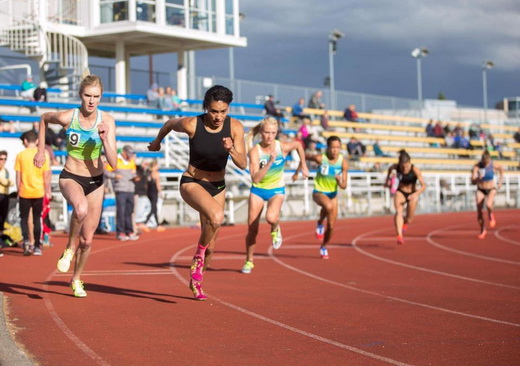 Join discussion forum on this subject>>

From the ashes of the cancelled, 28-year-running Victoria Track Classic, rose up the Vic City Invite, a smaller, low-profile, but high-performance middle-distance track meet neatly scheduled for Thursday, June 8.

The date provided an opportunity for athletes to get in a competitive race before the bigger meets happen like the Portland Track Festival, Stumptown Twilight, Harry Jerome Track Classic and the Canadian National Track and Field Championships.

Perhaps the main event was the women’s 1500m race, which included 2016 Rio Olympian Jessica O’Connell of Calgary, who was not going to pass up the opportunity to race down from her specialty, the 5,000m event. “This was my event until I moved up to the 5,000m,” said O’Connell. “I don’t have the seriously competitive leg speed anymore for this distance, but I love it anyway, it’s good stimulus.”

She finished in second place just ahead of Mariah Kelly, who is training with Athletics Canada’s West Hub that is based in Victoria. Regan Yee with Trinity Western University in Langley ended up winning the race.

Yee and Kelly will take in the Portland Track Festival and potentially the Stumptown Twilight, depending on if they get the standards that they are looking for in Portland. O’Connell has already cleared standard for the world championships and just needs to finish top-three at the national track and field championships.

“Portland is going to be a big race, shared Yee. “I am looking forward to it.”

Yee won in very windy conditions, finishing in the time of 4:12.32. Kelly and O’Connell crossed the line in the times of 4:12.39 and 4:12.85, respectively; it was an exciting finish, where the winner was only obvious on the timing sheet.

“We went off really fast,” said O’Connell. “I am short, so I was in the back for the first while and then found myself at the front late in the race. Regan just got me at the end. It was a fun race.”

Former University of Oregon Duck and Repentigny, Quebec, native Annie LeBlanc won the women’s 800m “A” event in the time of 2:04.87, while Stanford alumna, Claudia Saunders finished second in 2:05.34. Sherwood, Quebec’s Maite Bouchard is credited with third place and the time of 2:05.39.

In the men’s 800m event, University of Victoria Vikes athlete and Edmonton native Tyler Smith finished second to a high schooler. It was reverse deja vu for Smith, as he ran a 1:47 at the age of 17, which turned heads at the time. Thursday, it was Marco Arop also of Edmonton winning in the time of 1:49.30.

Asked if he saw a little of himself in Arop, Smith said, “In a way, I do see the confidence and I know what it is like to be the high school kid taking out the collegiate athletes. I told him to enjoy it. I hope he keeps improving.”

The Stanley brothers of Victoria took the 1500m “B” or development 1500m race, going 1-2. Jack was looking for a personal best, while Liam was seeking to add to the national Paralympic (T37) record that he already owns.

For Jack, leading for a portion of the race, it may have been too windy. “I ran about 4:06, a couple seconds off my best,” said Jack. “That’s not bad, considering the conditions,” he added, shrugging, knowing there wasn’t much he could do about the conditions.

He will be competing in the BC High School Jamboree this summer, then training for a cross-country season with the University of Toronto, which he earned an academic scholarship to.

The meet was organized in partnership between the University of Victoria Vikes and Athletics Canada’s West Hub and their group dubbed Vic City Elite. The meet took place in conjunction with the Christie-Phoenix Insurance Victoria Track Series, which provides runners of all abilities the opportunity to run track.

Rookie Race Director Geoff Harris, a former 800m runner for Canada, turned coach summed up the evening, “It was good, there weren’t great times due to the wind, but there was great racing. I guess we pulled it off.”

Join discussion forum on this subject>>