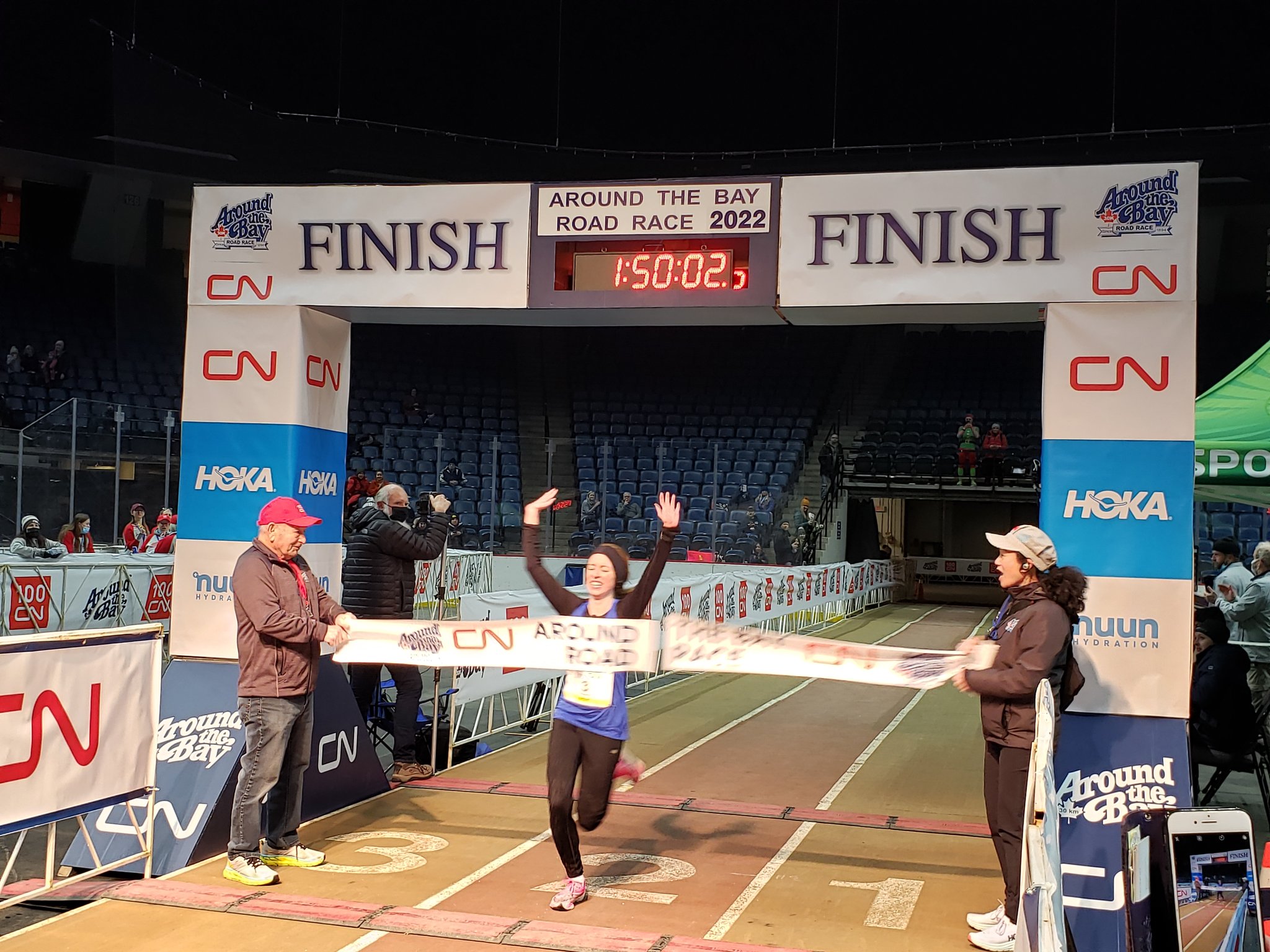 For Coates, it was a hometown win.

She entered the race with the expectation to win, even though it was her debut at anything longer than a half-marathon.

“My primary goal was to win the race and I was hoping to run under 1:49,” she told Athletics Illustrated. She was close on a cold and windy day.

“My plan for the race was to start out a bit quicker than goal pace where the course is relatively flat, recognizing that the hilly section starting around 19km would be slower,” added the 30-year-old urban planner. “The weather ended up being an additional obstacle, with a strong headwind for about 7.5km before heading into the hills.”

Her personal best over the half-marathon distance is from 2019 when she ran 1:12:36 in Indianapolis. The 30K distance lines up nicely for competitors to use it as a final long run before a spring marathon, but that’s not in the cards for Coates.

“No spring marathon for me – this was my goal race this winter. I’m taking time to recover now and then I’ll be getting ready for some 10ks.”

The road season is just around the corner with the Canada Running Series starting on Sunday, April 9 in Toronto.

Asked how she felt about the win, she said, “It feels great to come away with the win! Around the Bay is a really iconic race in Hamilton, not just for runners but for the whole community. It’s been a while since someone from Hamilton won so I’m really proud of this win.”

She is in good company, recent winners include Dayna Pidhoresky (5x), Krista DuChene (2x), and Lioudmila Kortchaguina (3x). The race has been run since 1894 (the 2021 edition was virtual, 2020 was cancelled).

Coates finished 12th overall and won by over three minutes. Rachel Hannah took second in the time of 1:53:17 and the third-place finisher was Brittany Moran in 1:53:50.

Like Coates, Coffey is getting ready to run shorter races this spring, however, while Coates was looking for the win, Coffey was pleasantly surprised by the outcome.

“The win was not expected and something that I didn’t really have certainty until after the last hill leading from Burlington into Hamilton,” he shared. “Reid (Coolsaet) is a world-class athlete and has put the in kicks that have beaten me before! When the win was in grasp I took full advantage of the opportunity to have some fun. There aren’t many times in life when you get to run into a huge stadium and know you have won. This was a big win for me because I have dreamed about trying to win Around the Bay since 2013 when my “elite” running career started.”

For Coffey, a Kingston, ON native, winter hasn’t been kind.

“My goal for the race was to put in a solid effort and see how it goes. The winter in Ontario has been really challenging and has made it tough to run quality sessions. Most of the long workouts were in -20 to -30c with brutal winds. This race was also meant to be a fitness test and to see what needs to be worked on for the rest of the season. The weather for the race was what it was like for most of the winter, windy and cold! The long cold training sessions of winter paid off and I couldn’t be more excited to make a podium position.”

Coffey has also run 14:07:16 in the 5000m event, arguably his best performance across the range of distances. He has also owns 10,000m best of 30:15.13. The perseverance in the cold and against one of Canada’s all-time top marathon runners suggest improving on the two benchmarks.

“This race was a part of a big volume training block leading into the spring race season. I will be shortening the races going forward. The race calendar is a fun one – and one that has me racing a lot! I will be in Toronto for the Spring Run Off, then Montreal a couple of weeks after that for the half with all of that (hopefully) gained fitness leading to the Ottawa road 10k (National Championship) on May 28th. My life is going to be a very exciting addition to it with my wife and I expecting our first child in early July. After that, well, I guess we will have to see how things go before making any major race plans or goal.”

Perhaps sleep deprivation will make him even tougher for another win in Around the Bay 30K 2023.