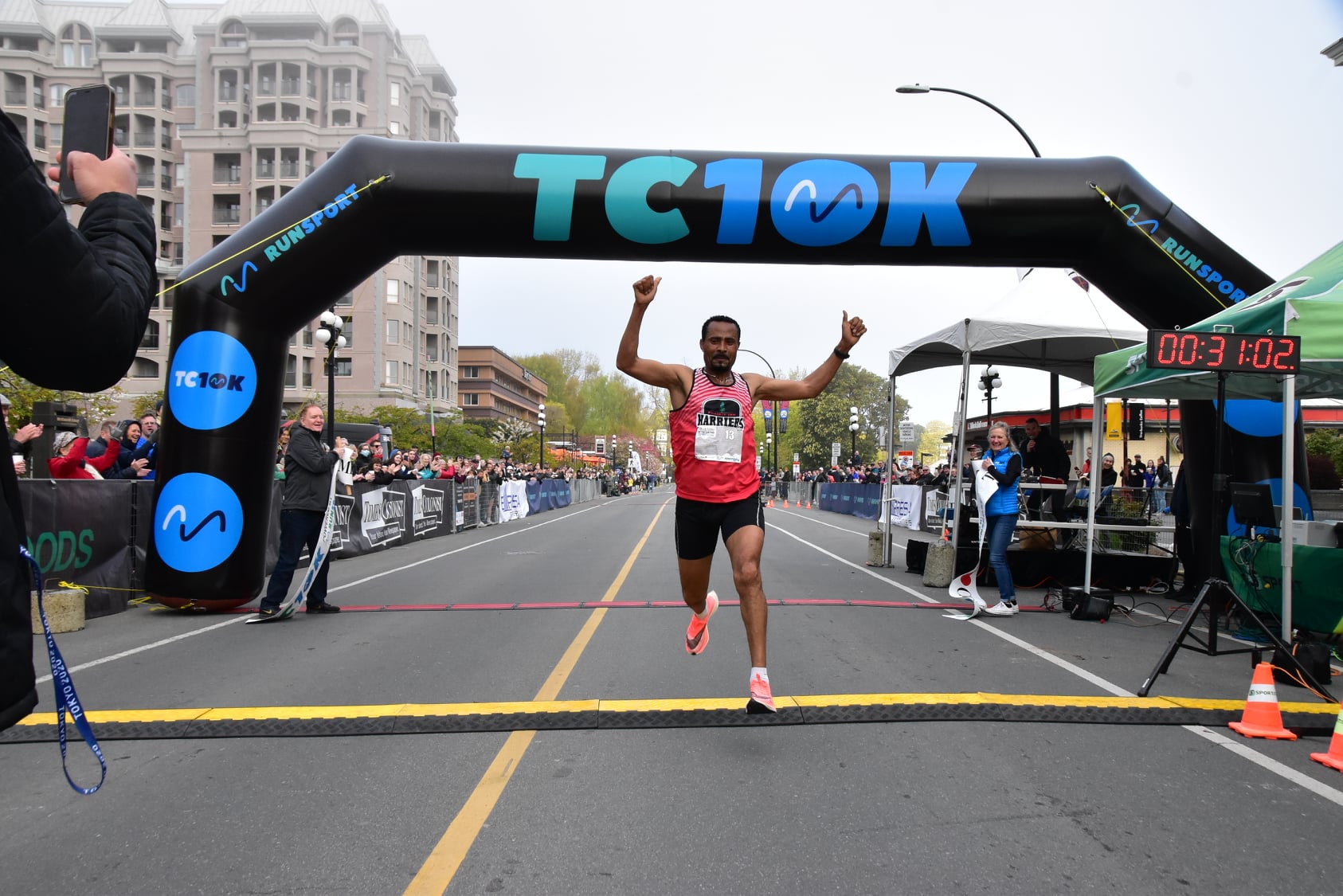 Sunday offered a rare TC10K where the headwind didn’t stymie a great rhythm between 5K and 8K along the scenic Dallas Road waterfront. The Vancouver Sun Run went off with over 18,000 athletes. Both races were smaller than usual, but, in fairness, the pandemic has not yet fully ebbed.

“It was a perfect day for racing. For once we didn’t have a headwind along Dallas Road,” said fifth-place finisher Nick Walker who clocked a 32:35.

The chatter amongst the runners during the warm-up was of perfect racing conditions. The prize purse at $10,000 had the sub-elite athletes wondering if it was an opportunity missed for some Vancouver-based runners taking in the deeper Vancouver Sun Run at the same time.

New Victorian, former Ethiopian, Teferi Kebede Balcha, now a 40-plus masters runner but also a 2:07 marathoner took off at the start, dropped the field early, and led from gun to tape. He clocked a 31:02 finish time and was able to triple dip on the money as the first overall, first master, and first Canadian. Balcha has immersed himself into the running community well as he trains with the Bruce Deacon and Gary Barber-led Prairie Inn Harriers training group. Both former winners of the event, once known as the Garden City 10K.

“Beautiful course, a very nice race and am happy with my result today,” said Balcha through an interpreter.

Stanley had planned on running 32:00 but wasn’t sure where his fitness was for the longer 10K race, having competed in the 1500m and 3000m for the University of Toronto.

He will embark on more track racing coming up including the 5000m distance. His best is 14:21.49 from just three weeks ago.

“I was surprised. I haven’t really raced this distance before,” shared Toombs. “I have over cross-country, so the distance isn’t new but doing it on the road is. I am happy with the result. If it wasn’t for Jack, I wouldn’t have run that fast. We had a good race going back and forth.”

The top-three masters were Balcha, Russell, and the near 50-year-old Jim Finlayson who clocked a 33:22 finish time for sixth overall.

Like the men’s field, the masters dominated. Victoria’s Jen Millar clocked a 36:13 finish time for the win.

“It was a good race. I got up behind some guys to draft off of for a bit on Dallas Road and that helped a bit, but conditions were great and I am happy with the result,” shared the 42-year-old.

Millar’s personal best over the distance is 35:20 at the Vancouver Sun Run, but officially 35:46 in Victoria at the TC10K, both run nine years prior.

Care Nelson finished in second place in the time of 36:50. Maia Watson clocked a 37:47 finish to take third. She is the daughter of Lucy Smith who won the race several times and is now on the organizing committee and is the TC10K ambassador.

Smith was the second master and competed in the 50-54 age category. She clocked a 39:03, a strong performance from someone who runs a small portion of the volume she did when she competed in ironman, cross-country, track, and road racing taking 19 national titles during her career. Smith has run the distance as fast as 32:53 in 2004 and on the track (10,000m) in 32:46.84.

The Victoria-raised Watson runs in the USport league for McGill University in Montreal.

Catrin Jones, a 50K ultradistance specialist with a national record of her own was the third master finishing in the time 39:29.

Typically, the TC10K and the Vancouver Sun Run happen on different weekends so that the athletes can compete in both races and for a third race in three weeks, the BMO Vancouver Marathon and half-marathon is often a popular choice. Not in 2022. Perhaps so eager to get back to in-person racing, the calendars clashed.

Vancouver’s Lucas Bruchet and transplanted Ontarian, Leslie Sexton, who now calls Vancouver home, won the men’s and women’s races. They finished in the times of 28:29 and 32:37, respectively. The Sun Run’s precipitous drop during the first mile deems it not eligible for records and qualification standards, however, after that first mile, the course roles and includes a steep pitch at 5K to climb up to the Burrard Bridge.

Bruchet’s best on the track is 27:56.12 and his best on the roads is 28:49 from Toronto, in 2021. He specializes in the 5000m event and is currently Canada’s third-fastest at that distance with his 13:12.56 performance from June 2021. The universe, unfortunately, didn’t align as two of North America’s all-time fastest at the distance Mo Ahmed and Justyn Knight happen to be Canadians too. Bruchet is also a full-time teacher in Vancouver.

Finishing in second place was Benjamin Preisner in 28:41 and in third was Justin Kent at 28:50. Tristan Woodfine, who was training in Victoria during the winter perhaps should have raced in Victoria to take the win and double-dip on the prize purse. He also happens to be one of Canada’s fastest marathon runners having run the London (pandemic version in St. James Park) in 2:10:51.

Interestingly, Geoff Martinson, 2011 Daegu World Athletics competitor in the 1500m distance has not been seen racing for some time acquitted himself well with a 31:47 clocking. In another time, he would have likely competed with Bruchet for the win. The Prince George native competed for the UVic Vikes and is now working as a pharmacist.

Maria Bernard-Galea took second in the time of 32:57, which was a strong performance for the Calgary-based athlete. For Canadian distance running fans, it was exciting to see Lanni Marchant back racing well. She took third in the time of 33:13. Marchant came to the fore on the racing scene when she clocked a Canadian record in the marathon in Toronto going 2:28:00 in 2013.

She suffered serious hip injuries and underwent surgery and at 38 is back racing at a high level. Her best over 10K is 31:49 from 2015. Like Bruchet, she competed in the 2016 Rio Olympic Games. He also competed in Tokyo in 2021. Missing in action (for running fans) was Natasha Wodak, who has won the event in the past. She is the former national 10,000m record holder and finished 13th in the Tokyo Olympic Marathon. She is, however, coming off of a Boston Marathon run and still recovering.