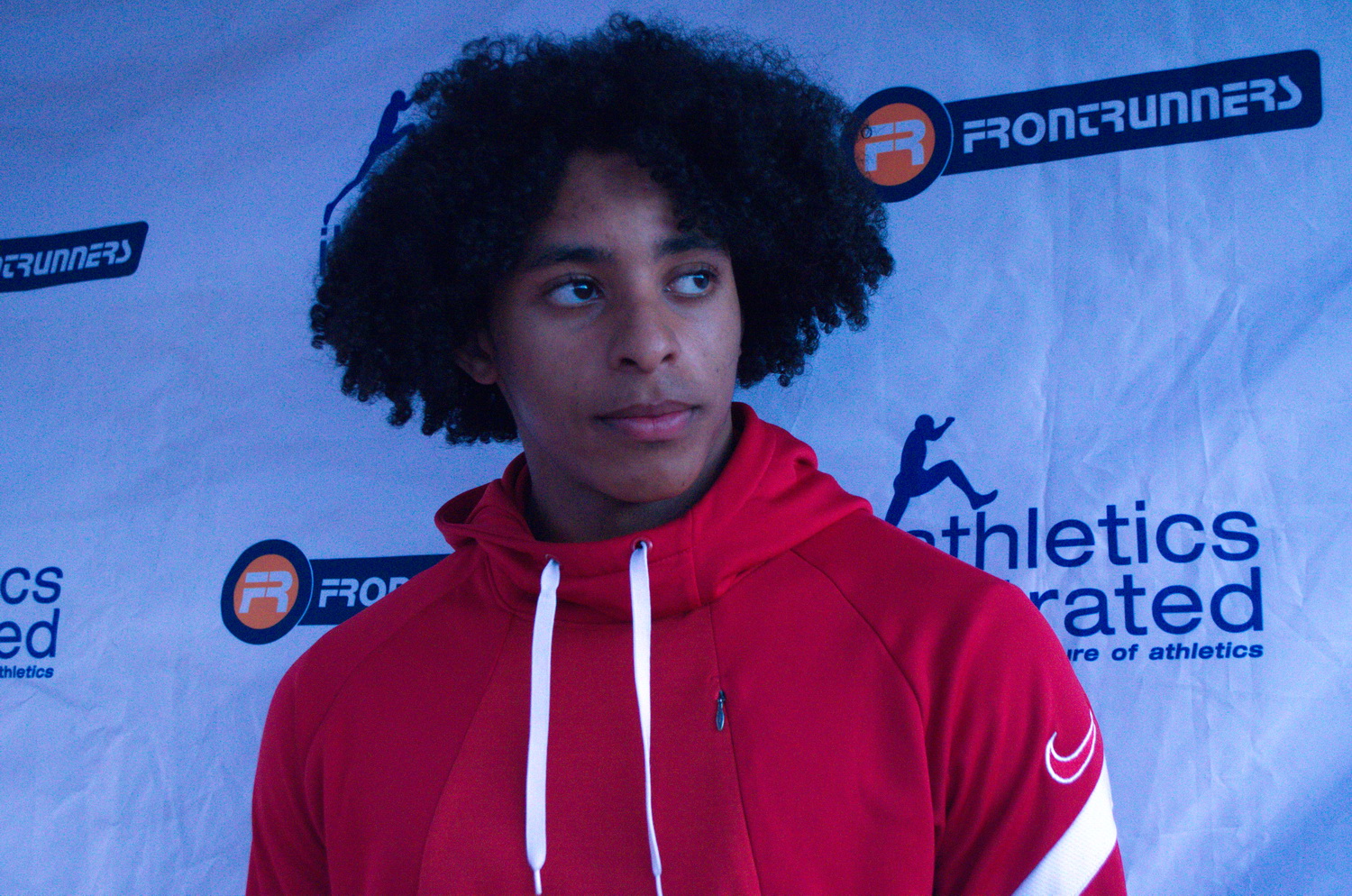 The first high performance track meet to happen in Victoria, BC for several years ran Thursday night at the University of Victoria’s Centennial Stadium. In attendance and running the show was a who’s who of Canadian athletics — it’s a community thing.

Seen, but not competing were two of Canada’s faster marathon runners Leslie Sexton (2:28:35) and Rachel Cliff (2:26:56), the latter with newborn daughter in arms. And they were with Athletics Canada’s Chris Winter — or “dad” for short.

Thelma Wright was volunteering, while coaches Mike Van Tighem and Lynn Kanuka took to the microphones for the house PA system. Meanwhile, six-time World Cross Country Championships competitor for Ireland, Paul O’Callaghan, was voicing the play by play for the live stream. Two-time Olympian Bruce Deacon was coaching his young athletes. Heather Henniger, Trent and Hilary Stellingwerff, Trish and Brent Fougner, Ulla Hansen and Harry Jerome’s old training partner Frank Marlatt were helping. They, as well as the Fougners and many of the long-tenured officials know, you never really retire from the sport.

One of the marquee races on the night featured Brandon McBride, Canada’s all-time fastest 800m runner. He won finishing in the time of 1:46.14. For his standards, never mind the qualification standard for World Championships, it wasn’t a fast performance. For the hundreds watching at Centennial Stadium it was indeed fast. He runs beautifully, but at the end of the day, it is what the clock reads that matters.

Post-race the 28-year-old Toronto native was quick to flash a smile, sign autographs for eager kids, but was just as fast to exit the stadium.

“The time was not quite there today but it will come. I just want to improve daily,” said McBride.

“It was nice to compete in front of this crowd.”

Although he is likely a shoe-in for Team Canada, he would want to go into the national championships in Langley next week riding a little higher. For example, the 2019 Doha World Athletics Championships winning time was 1:42.34 by American Donovan Brazier. The bronze medallist Ferguson Rotich clocked a 1:43.82 result — well within McBride’s ability, but at a different level.

McBride has run as fast as 1:43.20, which is the current Canadian record. The race is named the Gary Reed 800 Metre after the athlete who previously held the national record at 1:43.68.

American Joe Abbott holds the meet record at 1:45.63 from 2013, which was done before supershoes or superspikes were a thing. Finishing in second place was Johnny Gregorek who clocked a 1:47.53 performance. Sam Prakel took third in the time of 1:47.99.

Performance of the night

Perhaps the performance of the night was not from an international athlete, but from 15-year-old Grade 9 student Travis Harfield. The Victoria High School athlete threw the javelin to a national record for the U16 age-category. The javelin landed more than 9m further than the previous record. He threw for 72.96m — it was a jaw-dropping performance.

Asked if he remembers all the records that he has set this season, Harfield did and listed them off, “school, city, zone, provincial, meet and national records,” all in one season.

Asked how he came to choose javelin he said, “when I was living in Manchester (UK), I saw these athletes throwing the javelin in the local park and I thought that it was an interesting sport to try out.”

“I don’t go in thinking that I am going to break a record. I just try to do my best and see what happens.”

“That kid is amazing,” said Curtis Thompson, who won the event throwing 80.85m. Thompson from New Jersey, now training in Alabama graduated two years ago from Mississippi State. He is looking for the World Athletics standard of 85m. He has thrown as far at 82.88m at Hayward Field in 2016.

“Travis is already talented. Watch out for him, he has a future in the sport for sure.”

St. Michael’s University School grad Tion McLeish who has committed to the University of Victoria, won the 1500m development race in 3:59.49. He set a new personal best and cracked the four-minute barrier for the first time. Then he was off to take part in his high school graduation ceremony which takes place at the university’s Farquhar Auditorium. It would take less time for McLeish to get to his grad than to race the 1500m.

The pending ceremony didn’t stop him from returning to the track for a post-race interview.

Commenting on graduating at the same place where he was running his final race as a high schooler, McLeish said, “All I need is right here.”

“I can’t thank my coach Dacre Bowen enough for the leadership and all the support that I have had. I am sad to leave it behind, but very happy to start with UVic under Hilary Stellingwerff next year,” shared McLeish.

Then he dashed off to his grad — all in a day’s work.

“It is really nice to be around family and this is the first time that I have been able to race in the same meets as my sister. So, we have really enjoyed the visit up here,” shared Green.

Not too far behind was University of British Columbia Thunderbird Tyler Dozzi who previously competed for nearby Oak Bay High School. He also clocked a new personal best of 7:58.54. Matt Leach (Peninsula Distance Club) took third in the time of 8:10.07.

Flanagan plans to move up to the marathon sometime in the near future. When, he is not sure, but likely in 2023.

Jean-Simon Desgagnés of Laval University won the men’s 3000m steeplechase in the time of 8:27.94. The 23-year-old has run a few seconds faster, but he did best Ireland’s Brian Fay, who may have been the pre-race favourite. Fay, a University of Washington runner and a quadruplet, clocked 8:32.65. His best is 8:09.26. World Athletics standard is 8:22.00.